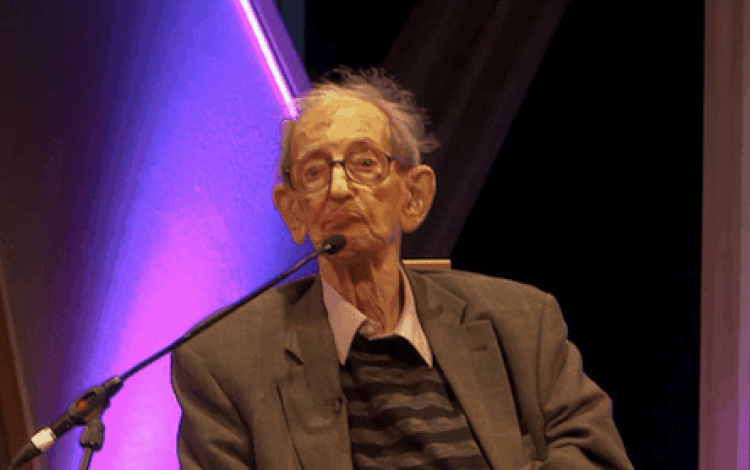 When, in the summer of 1950, the Marxist historian Eric Hobsbawm discovered that his rst wife, Muriel, was having an a air, he was, unsurprisingly, deeply wounded.

But not because of the in delity in itself. In Hobsbawm’s eyes, we learn from this exhaustive biography, the real betrayal was that the lover was not a member of the Communist Party.

The political is the personal, as Lenin used to say with monotonous regularity. The central, de ning fact in Hobsbawm’s life was his politics. He was loyal to a cause and the practical manifestation of a cause – The Party – even though, from the age of about 40, in a life spanning nine decades, he had ceased to believe in most of the things that were being done in the name of communism.

In a way it is a tragic personal story – a vastly talented man continuing to believe in a God he knew had failed, using brilliance to justify the unjustifiable from a sense of misplaced comradeship. Not so much trahison des clercs – the treason of the intellectuals against the people – as treason against oneself.

Of course, the cold warriors, who will trash Evans’s book as too generous to the most famous communist intellectual to write in English, won’t see his life in this way. On so many of the big political and historical questions, Hobsbawm was wrong or blind and often both.

Communism would not make the world a better place or transform humankind. Hobsbawm invariably skated over the enormous cost in blood of the failed Soviet experiment. He was a propagandist who, as a professor at London University, in uenced two generations of young people to sympathise with a cause that at one point tyrannised nearly half the population of the world.

All true, up to a point. But, for the Right, Hobsbawm’s main offence was that he could be so damned good, as Niall Ferguson, who profoundly disagreed with him on almost everything, admitted. He was master of the big, broad sweep of historical analysis, good on the telling detail, wrote elegantly and wore his erudition lightly. At his best, Ferguson said, Hobsbawm ‘wrote some of the truly great historical works of the 20th century’. Boris Johnson admired him: ‘He is as wise as a treeful of owls.’

How galling it was that, after communism failed, the Berlin Wall collapsed and the USSR disappeared, an unrepentant Marxist became the best-known and most widely read historian in the world. One of Hobsbawm’s best books, The Age of Revolution (1962), sold more than 260,000 copies in Brazil in its rst year when it was published there in 1974 – and more than that in India, where his death in 2012 was front-page news in most of the newspapers. How annoying that an unreconstructed socialist living in Hampstead could make so much money.

Evans is good on Hobsbawm’s early years. He was born, appropriately enough, in 1917. His father, an East End Jew, had gone to Egypt to work for a British-run company but, soon after the First World War, the family went to Vienna and then Berlin, where they fell on hard times and faced near destitution.

Both his parents died young, leaving Hobsbawm a Jewish teenage orphan in Berlin during the rise of the Nazis. He was bookish and intense – ‘ugly as sin, but a mind...’, according to an adolescent friend – and an easy convert to communism, which gave him a tribe, a sense of belonging and, compared with fascism, intellectual stimulus.

British relatives brought him to London in 1933, where he excelled at school, and won a scholarship to Cambridge. He took a starred double rst and completed a doctorate before joining

the army’s education corps during the war. After the war, he returned to Cambridge with a junior fellowship at King’s. In 1947 he went to Birkbeck, where he stayed for the rest of his career.

It is easy to explain why Hobsbawm became a communist during the Weimar Republic, when Jews and socialists were beaten up on the streets by Hitler’s Brownshirts, when politics was a matter of life and death. Unlike so many people in Britain, Evans understands this well and writes of it vividly.

He is altogether less convincing about why Hobsbawm remained a Communist Party member until it ceased to exist, even while the party was having doubts about him and discussed expelling him (Evans has records of MI5 surveillance to establish this).

Nearly half the membership jumped ship after the Soviet’s brutal crackdown in Hungary in 1956, but not Hobsbawm. His own explanation – that leaving would betray friends and his own identity – seems as clichéd as his pat answer when people pointed out that he was a bit of a Bollinger Bolshevik: ‘If you’re on the Titanic, you might as well go rst class,’ he used to say.

Evans lets him o the hook too easily, in a book of monumental length, which might have been twice as good at half its 784 pages. Even biographies of Gibbon or Macaulay, among historians, are somewhat shorter.

Real success came to Hobsbawm late in life, in his sixties onwards, when the revolutionary theoretician became a Companion of Honour and a member of the Athenaeum. For him, his status as a national treasure in the decade before he died was consummated when MI5 ceased to eavesdrop on his conversations.