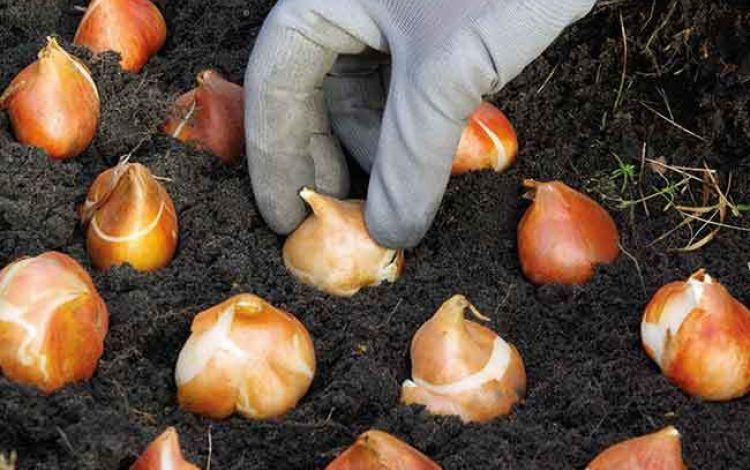 Bulbs. They were arriving in the post every day – small parcels from diverse dealers. I thought I’d keep up with them, diligently planting the contents of each new package before sunset. But they began mounting up.

Like a hunger-stricken soul salivating over cookery books and restaurant menus, I made hay with the catalogues this spring, seduced by glorious colour photographs while recovering from surgery.

I wasn’t displeased – just anxious to get all the bulbs into the ground before they started to shoot and shrivel like that residual garlic head lurking in the bottom of every fridge.

I was justified in holding back on planting those destined for flower borders as, until recently, they held on to their fine, late-summer plumage. It would have meant trampling on stately heleniums and monardas, generous second-flowering geraniums and a glorious rainbow of towering salvias in an effort to dibble planting holes for next season’s tulips. But bulbs showing precocious activity can be plonked into compost-filled pots to get them started, then safely decanted into the good earth when their destined beds have surrendered to autumn cutbacks.

Early- and mid-October days are frequently benign (the 1987 overnight Great Storm on 15th/16th of the month notwithstanding) and as magical and precious as May mornings. And in these burnished days I dealt with the backlog: all the bulbs – some 3,000 of the blighters – are buried now beneath their allotted clods and sods, awaiting the prince’s kiss that will break their dormancy.

Fortunately, it’s difficult to fail with bulbs, especially in their first year. Everything they need, except water and light, is built into their compact selves. They know what they have to do and when to do it. With the backbreaking agony of their planting forgotten, we can look forward to the spectacle promised by the printed catalogues six months earlier.

I’ve learnt over the years that almost all bulbs prefer to sit deep. Tulips especially will reward the gardener for several years repeatedly if planted 8, 10 or even 12 inches deep. That’s what the late Christopher Lloyd advocated, and the Great Dixter team – directed by head gardener Fergus Garrett – continue to follow the old boy’s diktat. And, of course, bulbs thus buried are less likely to be disturbed by wayward spades and forks and remain safely out of the reach of foraging, winter hungry critters. Smaller bulbs require less depth of soil, and must accept risks.

Twin desires influenced my 2019 bulb order. I coveted more of those that perform well and were too sparsely represented: hence my procuring 500 more scillas (Scilla bifolia and S siberica ‘Spring Beauty’), guaranteed to spangle the earth with fragile chips of lapis blue in February’s short and darkest days. They naturalise speedily, yet one can never really have enough. You believe in miracles when little bullet-heads of startling colour start to show and animate the dun earth just as snowdrops begin their retreat. And the later-flowering (April) dog’s-tooth violets (Erythronium ‘Pagoda’ and ‘White Beauty’) do spectacularly well here, competing manfully with tufty grass in woodland patches – so why not have more?

My other motive, known to all gardeners, was for new (to me) things. So I sought three different kinds of allium – plants I’ve been excited by in other people’s gardens but never tried wholeheartedly myself. Now I have 30 bulbs each of giant-headed, June-flowering Allium christophii and smaller-flowering ‘Purple Rain’ and ‘Purple Sensation’ – baubles to illuminate flower borders in next year’s early-summer garb.

Job done – for another year, anyway. Like the bulbs themselves, seduction will surely blossom again when the 2020 catalogues drop onto the doormat.

Restaurants: James Pebroke reviews The Square and Compass, The Salt Pig, and Parabola