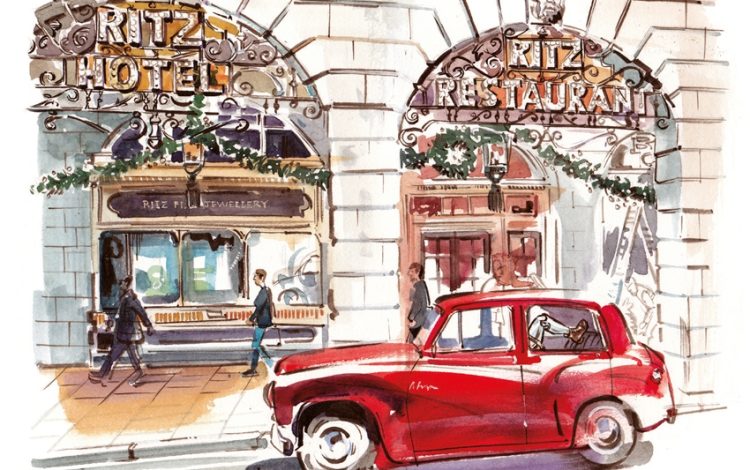 The Ritz and the Ditch By Diana Holderness

Diana Holderness’s father, Edward ‘Flash’ Kellett, told her the reason he married her mother ‘was that she liked the Ritz and the ditch’ – the two extremes of luxury and gypsydom. The phrase makes a good title for a memoir.

Holderness has inherited this Ritz-and-ditch taste: one minute she and her husband are attending the Coronation, the next they’re sleeping in the back of their cramped Hillman car.

Who is Holderness? Well, she’s the one who married the son of Lord Halifax, Richard Wood (later Baron Holderness), who’d had both legs amputated after they were crushed by a bomb in Libya in 1942. He became a Conservative MP for Bridlington from 1950 to 1979, and he and Holderness had a long, happy marriage, the tin legs doing nothing to dent his attractiveness.

The tin legs could be useful: after their honeymoon, they smuggled things through Irish customs in them. (That’s a detail that has contemporary relevance.) But they were badly made. Once, Holderness tells us, one of the legs fell off while Richard was showing the Queen and Prince Philip round an iron foundry in Wales. ‘Even though it was an iron foundry, they couldn’t mend his leg and it had to be tied back on with wire for the time being.’

This memoir is a manifesto for the non-crying generation. ‘People like us don’t cry,’ Holderness’s mother firmly told her when, in 1943, they heard the news that Flash had been killed by a shell while shaving in his tank in Tunisia. Her mother had heard the King of Greece say those very words to his wife when getting onto a boat together; she’d been crying at leaving her homeland. ‘People like us don’t cry,’ the King said.

When Wood came home with no legs after the war, his father (‘Lord H’) said to him, ‘I’ve had one hand all my life and I’ve managed. I’m sure you’ll manage without legs.’ He never mentioned the subject again.

There was, actually, a hiccup at the beginning of the marriage. Wood left his wife for two months, saying, ‘I’m going home to Mummy.’ Holderness thinks it was a kind of post-traumatic stress disorder. I bet it jolly well was. He soon came back and it was almost unmitigated bliss from then on, Diana taking to heart the advice from Canon Hughes of Westminster Abbey in the wedding address ‘always to put each other first’. They had a son and a daughter in the days when ‘you never said you were having a baby or appeared in public if you were’.

She is a good teller of anecdotes, homing in on crucial details that kept making me look up from the page and stare into the middle distance, thinking about what I’d just read before reading on. ‘WHAT?’ I thought, as I took in her two-line mention of a clergyman they met in Lusaka: ‘The unfortunate priest had filled the chalice with white-ant poison rather than wine and had killed several communicants.’

There are revealing glimpses of the innate snobbery of those days. When people bought televisions, they justified having stooped so low by saying, ‘We got one for the servants.’ When Diana and her mother moved into a small house in Paddington after Diana’s father died, her mother never let the water out of her bath. ‘She said she’d always had a maid to do that.’ I loved all that, and I loved Diana and Richard sleeping in the back of their car to save money when abroad, in the days when you couldn’t take more than £25 out of the country.

There is less to enjoy in the second half of the book, when their life becomes far more Ritz than ditch: endless luxury travel with Wood as Minister for Power (the electrical kind) and then Minister for Overseas Development. There is too much ‘what we did on our grand holidays’. ‘From Darwin we flew to Hong Kong’; ‘We were soon on to Singapore and then Indonesia where we stayed with our Ambassador’. I didn’t like the snobbish moment in Barbados: ‘One snag was that the public had the right to walk everywhere; so we kept finding locals in the garden.’

As someone who notices beautiful hands, I was particularly moved by this sentence: ‘I took a photograph of Richard’s hands which I still have on my dressing table.’ Richard died in 2002. ‘I still think of Flash and Richard every day of my life,’ Holderness writes. Anyone who reads this book will not forget them.