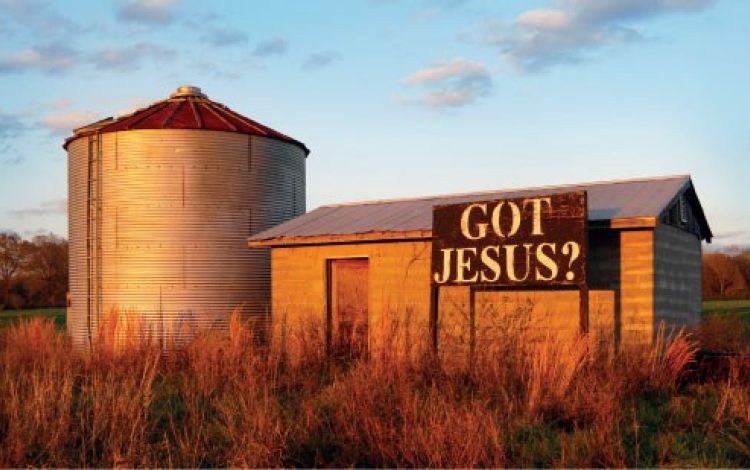 James Innes-Smith (follow @jamesinnessmith) travels through the Bible Belt in search of salvation. He doesn’t find it but he is converted to the Southern way of life

They call Jackson the “buckle” of the Bible Belt. You’re right in the heart of Jesus country here.’ Jim Hayte (a more agreeable man you’d be hard pressed to find) has an air of mid-period Elvis about him. The sculpted cheekbones have that unmistakable Presley sheen and the slow, Southern drawl is spookily reminiscent of the King. The two of us are enjoying a classic Southern breakfast of fried eggs, gloopy grits and chewy bacon under the canopy of what used to be a gas station on the outskirts of Jackson, Mississippi.

‘My wife always wanted to run a diner so we bought this old place and converted it two years ago.’ Many of the classic 1950s gas station accoutrements have been preserved, including an old sun-bleached red and silver ‘MIMI’S GAS’ sign hanging above a row of gently rusting pumps. ‘Passers-by often turn in here expecting to fill up. An hour later they leave with a belly full of my wife’s legendary scrambled eggs.’

I made the same mistake as I headed north out of Jackson through what has become the chintzy boho district of the city – all pastel-coloured boutiques selling pyramid candles and floaty shawls. The breakfast portions at Jim’s diner are legendary and the buckle of my non-biblical belt has been loosened accordingly. Jim mends trucks for a living but prefers to call himself a pastor. As I’m discovering as I continue my journey north from New Orleans through all four of the Bible Belt states, in this part of the US you don’t have to be an actual pastor to start pastorising. Few of the preachers I’ve met so far have had much in the way of ecclesiastical training but what they all share is an infectious zeal for the big          ‘J’ and an almost encyclopaedic knowledge of the Bible. You’re never far from a chapter reference around Jim and his well-thumbed pocket King James Bible remains close at hand. When I tell him about my spiritual quest, he pounces.

‘I had a feeling something miraculous was going to happen today. I reckon the good Lord Jesus is gonna show himself to you right here.’ And with that he rests a reassuring hand on my head and whispers ‘A-men’. ‘This place used to be a filling station,’ he continues. ‘In a way it still is; only now we fill people with the Holy Spirit.’

I’ve been on the road now for a couple of weeks. Jim will be the fourth preacher to attempt a conversion. Making that all-important leap of faith has so far eluded me but as well as enjoying a spectacular road-trip through some of the loveliest scenery in the US I’m hoping for a spot of spiritual succour along the way. And where better to find redemption than in a cluster of states with more churches per capita than anywhere else on Earth? Alabama, Georgia, Louisiana, Mississippi and the Carolinas are all about good living, good food and religious devotion. Head up the I-40 from Knoxville and you are soon bombarded by giant billboards posing deep questions such as ‘If you died today, where would you spend eternity?’ Further north along the Great Smoky Mountain Expressway (yes, it’s as dreamy as it sounds), you find McDonald’s billboards competing with church-funded signs claiming ‘Only one thing can save America: turning to God!’ Tune into the radio and it’s all ‘hellfire’ this and ‘eternal-damnation’ that alongside laid-back country music stations playing loops of Randy Travis. Non-believers are reminded at almost every turn that they don’t have a hope in hell without Him.

There are a bewildering number of Christian denominations vying for my attention as I begin the 440-mile drive along the old spiritual highway known as Natchez Trace Parkway. You may find the 50mph speed limit here irritating at first but with a long history and a rich variety of scenery and greenery to explore you’d be mad to rush it.

The gently meandering ‘trace’ became an important recruiting route during the two ‘Great Awakening’ religious movements that swept through the US in the 18th and 19th centuries. Methodist and Lutheran preachers worked the length of what was then just a rough dirt track, converting Caucasians and African Americans as they went. These days there’s much more to the Trace than religious fervour. Park up and head out along one of the numerous hiking trails that border the mighty Mississippi and you’ll be rewarded with waterfalls, dense forests and prehistoric mounds. The Old Trace Drive (milepost 375.8) provides spectacular overlooks of a stunning hardwood forest. Take a break at milepost 193.1 and head to the summit of Jeff Busby Little Mountain for spectacular views across the Mississippi Hills. Tent up at one of the many campsites and enjoy a morning dip in the US’s most iconic river. Locals believe the Mississippi waters have restorative powers.

Americans are devoted to their National Parks, so traffic along the Trace can get busy at weekends. The highway has recently become a designated cycle route so there’s always the option of hiring a bike. The going is easy with few inclines.

My first stop along the Trace is the attractive colonial town of Natchez where the highway begins its slow meandering path through some of the Mississippi Delta’s most luscious scenery (enjoy a DIY barbecue at one of the barbecue stops along the banks of the river: bring wood, matches and plenty of catfish to blacken on one of the many public grills).

Natchez is the kind of white clapperboard town where gushing neighbours drop round for a chat armed with baskets of freshly baked cookies. The Pilgrim Baptist Church on Main Street is already bursting at the aisles when I arrive. As the only white face amongst a sea of brightly coloured hats and Sunday bests, I feel somewhat conspicuous as I creep into a back pew.

‘Hey brother, stand up and make yourself known to us.’ Three immaculately suited preachers guide me to the altar. ‘Are you ready to receive Jesus into your life?’ one of them asks. ‘Well, yes, as a matter of fact I am,’ I reply. And with that the whole congregation leaps to its feet. A mighty Hammond organ swirls into action as a fifty-strong choir bursts into rapturous, close-harmony singing. All three preachers lay their hands on my head and start praying. Unfortunately Jesus fails to make his presence felt but the service is gloriously exuberant. Afterwards, I join the rest of the congregation for a deliciously smoky barbecue breakfast of blackened chicken and grits outside in the church car park.

With inspiration in my heart and a belly full of slow-cooked victuals, I head north to Tennessee. Like many towns in the Deep South, Corinth appears at first to be just another boring strip of scrappy motels, hick bars and Sizzler restaurants. It’s not until you venture off the main highway that you discover the grand plantation houses and charming downtown area with its criss-cross of neat tree-lined avenues with pristine clapboard churches on every corner.

You’re never far from an EconoLodge in the US and in my experience they are the best maintained and least stinky of the cheaper motel chains. The one in Corinth is positively five-star. For a mere $59 a night you get an outdoor pool, a massive buffet breakfast and a welcome chocolate on the pillow.

Next to me at the check-in desk was a jolly, rotund man exchanging Bible quotes with the woman behind the counter. Dwain Hawk works as a used car salesman but is a Presbyterian minister on the side. Convincing people to have faith is Dwain’s forte and when he hears about my quest for salvation his face lights up.

‘You know, I think we should summon up Jesus right here in the lobby.’

‘But shouldn’t we be in church?’

‘Jesus doesn’t discriminate.’ And with that he takes up his Bible, lays a hand on my shoulder and starts praying his religious heart out.

Despite two valiant attempts at a conversion, cold agnosticism continues to hold me back. It’s a shame but as I begin the last leg of my journey north to Washington I feel a sudden surge of joy. The low sun is blinking through the copper trees as I speed past a giant billboard exclaiming ‘Give your heart to Jesus!’ If I only had the courage to let go, perhaps I might become as affable, laid-back and hospitable as the folk I have met on my journey across the Deep South.

While traces of the region’s troubled past remain, what lingers is a sense of serenity borne out of a deep spiritual conviction. But don’t worry if Jesus fails to make his presence known to you; the majesty of the Mississippi and those legendary cooked breakfasts are enough to make you throw up your hands in praise.

My search for life after George