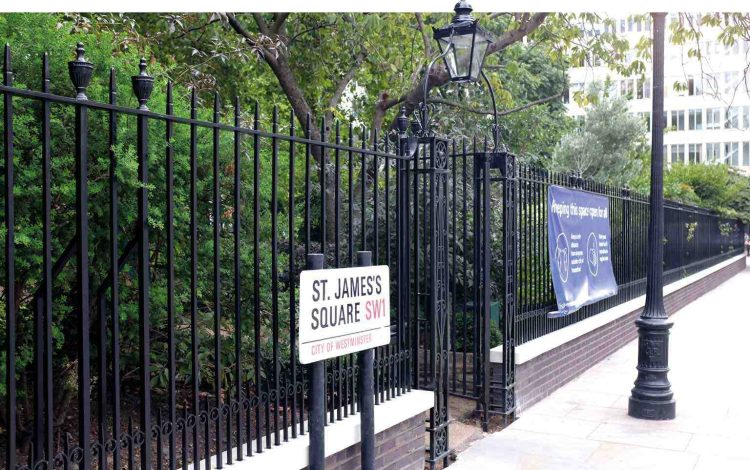 A Tottenham factory has replaced miles of railings ripped out of 40 London squares during the war. It’s just finished the historic railings in Hanover Square - by Harry Mount

David Sugarman is the man who changed the face of London.

In the last 24 years, his family-owned factory has returned elegant railings to no less than 40 London squares. David, 62, has built gates for the Albert Hall and Buckingham Palace and installed balustrades at the back of Downing Street to hide Tony Blair’s air conditioning unit.

This year alone, his company, Metalcraft, set up in 1960 by his father Lewis Sugarman, has made copies of John Nash’s 1817 railings round St James’s Square. He’s also erected railings around Gloucester Square and Hyde Park Square for their owners, the Church Commissioners. And the railings around Hanover Square have just been installed.

Those four jobs alone involved over 1000 yards of beautiful, period-style railings returned to the city. In his career, David has laid miles and miles of railings around our loveliest garden squares.

The original railings were crazily ripped out during the war, in an admirable, doomed attempt to recycle them as munitions to help the war effort.

‘The iron wasn’t of the right quality,’ says David. ‘So they were dumped – some say in the North Sea.’

David Sugarman, a civil engineer, took over his father’s company in 1987 and, a decade later, he installed the company’s first railings in Bramham Gardens in Earl’s Court.

The Royal Borough of Kensington and Chelsea were so pleased with the work that they then commissioned him to fit the railings at Bina Gardens, Bolton Garden and Gledhow Gardens. And so the commissions started to pour in. The railings projects for the squares tend to cost around half a million pounds each and take six months to install.

‘Over the years, we established a reputation for our expertise and experience in these railing projects and have manufactured and fitted more railings around more London squares and gardens than any other company in the UK,’ David says.

The railings are made from scratch in a process that has hardly changed since John Nash made his over two centuries ago.

Often, all David will have to go on is a sepia-tinted, pre-war photograph of the original railings. At St James’s Square, he was lucky to be able to copy a single surviving ‘dog-rail’ – a short, low rail between the tall railings to keep dogs out. This surviving dog rail was dug up by the square’s gardeners – it has been returned to the square and you can spot it today. It’s the only green rail in the square, surrounded by black railings.

Some pre-war railings survive in other squares, too, particularly where they protected a lightwell and so couldn’t be removed for fear of someone falling in.

The railings vary enormously from square to square. During the Victorian era, there were hundreds of foundries in London and they made thousands of varieties of railings:flowers, balls, fleur-de-lis, pineapples, artichokes, urns like the ones in St James’s Square and spearheads. David shows me spearheads left over from recent work in Park Crescent by Regent’s Park.

Each railing gets three layers of paint: light grey, dark grey and black. According to myth, railings were painted black in mourning for the early death of Prince Albert in 1861, aged 42. Camden Council bucks the mourning trend – their railings are in Dulux Heritage Green.

Once a photo or original dog rail has been located, designs are drawn up in the Tottenham factory and sent to the foundry, Ballantine Castings in Bo’ness, Scotland. All the components for the railings are made in the UK.

Models of the railings are made in wood and then cast in sand – thanks to 3-D printing, models can also be made in resin at lightning speed. Laser-cutting is used for ultra-intricate designs.

The components are then shipped down to London to be assembled in David’s factory. How thrilling it is to see things actually being made in London by the 26 employees on the 30 jobs that are being done at any one time.

Out in the Metalcraft storeroom, I saw the bases for the Hanover Square railings, in lovely, shiny, new iron. Next to them are 1930s railings, with pretty iron trellises, being restored for the old Nestlé factory, now a residential development in Hayes, west London.

In one corner lie some plainer structures: stairs and Juliet balconies for a Travelodge in Stamford Hill. In another corner are the iron pilasters that will support the period lamps of Hanover Square – these have hollow tubes, so electric wire can run through them.

I watch a welder (careful to avoid ‘arc eye’ that comes from looking too closely at a welder’s torch) binding the railings to horizontal holding bars. Another worker hammers the panels of railings to each other.

The length of each railing has to be carefully worked out before each job. At St James’s Square, the square falls from its north end to its south end by 24 inches. That has to be taken into account before the railings are slotted into their lead-lined mortices in the reconstituted Portland Stone base (made in Leeds) – the tops of the railings must be level.

It’s a tricky job, combining heavy metal with a light touch – but David loves it.

‘If those railings hadn’t been ripped out during the War, they could have lasted for hundreds of years more,’ he says. ‘It’s a joy to do work that will last well into my grandchildren’s lifetime.’