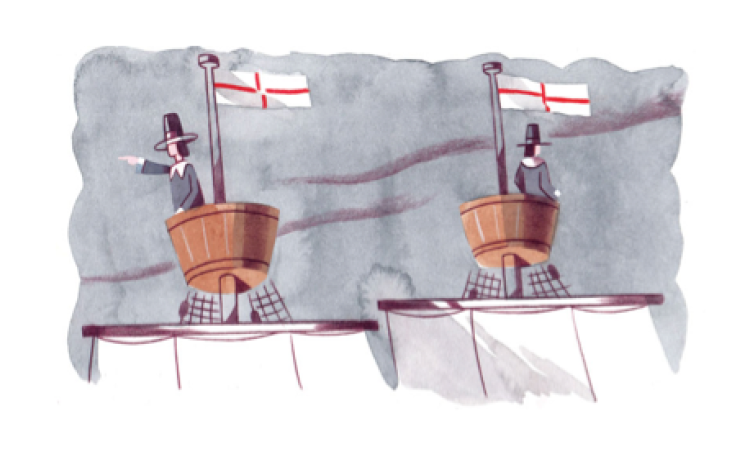 Today is Thanksgiving. When the Pilgrims then settled in Massachusetts, 400 years ago, they imported the place names, traditions and building styles of the country they left behind, says Rebecca Fraser

We have really everything in common with America nowadays except, of course, language,’ said Oscar Wilde. The Americans were even more similar to us until the American Revolution – the first English settlers were dominated by the customs and architecture of the English places they came from.

One American historian, David Hackett Fischer, even traces a distinctive building style in Massachusetts, adapted from the love of wood in eastern England, where so many of the first settlers hailed from. He saw continuity in building materials and in particular methods, with post and beams, and mortise and tenon joints. Wooden clapboards were more prevalent in East Anglia than anywhere else. Prototypes of the most iconographic Massachusetts architecture – the Cape Cod ‘saltbox’, with its unequal sides – were derived from Kent.

Names of towns in the New World, such as Sudbury, Ipswich, Framingham (originally Framlingham) and Boston, show how fond the settlers were of their homeland. In the case of the Winslows, the family who sailed on the Mayflower in 1620 and settled Plymouth Colony, the Massachusetts colonial venture, they called their home Careswell, after the ancient Winslow home in Worcestershire. A late-medieval farmhouse of that name still stands there, timber-framed with a thatched roof.

There are some confusing differences. For the English visitor, Massachusetts can feel like a looking-glass world. What the English called villages, New Englanders called towns. And so 17th-century New England towns look like small villages. Their houses are gathered round what was known as a meeting house, which in England is the church.

Sudbury, Massachusetts, was named for its parent town in Suffolk, but the American offshoot had little of the traditional indolence of the English village. Instead, there were endless meetings of what were known as the selectmen, to hammer out rules for communities starting from scratch.

Despite the links to the old country, the place of history in the New England psyche is conflicted. Ridding themselves of the corruption of the wicked Old World was a theme that influenced everything done by the Pilgrim Fathers – that is, the people on the Mayflower. Likewise, the community that founded Boston, Massachusetts, in 1630.

The five eastern counties of England were responsible for much of the early 17th-century Puritan migration. Around 40 per cent came from here. Many of them had attended Cambridge University in the 16th and 17th centuries. And they were infused with a radical, continental Protestantism – which had spread especially through ports on the East Anglian coast.

The emigrating Puritans battled against accusations of deserting the English Reformation. One of the most important Puritan ministers of his generation, John Cotton, the vicar of St Botolph’s in Boston, Lincolnshire, who emigrated to Boston, Massachusetts, in 1633, denied that they ‘fled from England, like mice from a crumbling house’.

Yet it was largely true. The Puritans had given up hoping for the sort of Reformation they wanted under Archbishop Laud and Charles I. In the case of the Mayflower Pilgrims, who were separatists from the Church of England, the puritan desire to shear the Church of England of artifice took an extreme form. They took pride in the simplicity that went with their poverty, a poverty they assumed for their religion. Grandeur was associated with corrupt bishops.

They could not have found a more ideal environment to reflect their values than Holland – to where they initially fled, to print illegal Puritan literature. When the end of the truce with Spain meant the new Dutch republic could no longer be open to every Protestant rebel, for fear of offending allies such as James I, they emigrated to America.

The ruling class in Holland at this time was often made up of simple shopkeepers or brewers. English noblemen, such as Lord Leicester, who handled the negotiations to ally England with the Dutch, snobbishly called their opposite numbers ‘the sovereign lords Millers and Cheesemen’.

The Pilgrims had no time for such aristocratic nonsense. They were not without elegance, but it came second to their moral purpose. Etiquette books enabled them to have both; they brought two on the Mayflower. One was the fashionable poet Richard Braithwaite’s Description of a Good Wife (1618), a witty verse description of the best feminine qualities. The other was the English translation of the Italian bestseller Stefano Guazzo’s La Civil Conversazione, a treatise on education, family and social life.

The Pilgrims warmed to what the Dutch historian J H Huizinga called the virtues of ‘thrift and simplicity’. They called their first gardens meersteads, the Dutch word for a garden plot. The most popular Dutch poet of the time, Jacob Cats, wrote aphorisms that were immensely comforting – even if they confirmed Leicester’s prejudices. Epithets such as ‘Dry bread at home is better than roast meat abroad’ or ‘A near neighbour is better than a distant cousin’ made virtues out of their desperate necessity.

When he wrote Plymouth Colony’s history, the Mayflower passenger and historian William Bradford announced he would depict it ‘in a plain style, with singular regard unto ye simple truth in all things, at least as near as my slender judgment can attain the same’.

Relishing the simple graves in which they buried members of the colony, Bradford wrote defiantly in his diary: ‘The memorial of the just shall be blessed, when the name of the wicked shall rot (with their marble monuments).’

Lack of adornment also served a unifying social purpose. The colonists thought it would sow dissension if differences between the colonists were too great. The unfortunate Boston grandee Thomas Dudley was publicly excoriated by John Winthrop for trying to build a mansion at a time when no one should crave personal distinction. In fact, all he wanted was the elaborate wainscoting which he had enjoyed at home.

Winthrop, one of the leaders of the Massachusetts Bay Colony, had been the Lord of the Manor of Groton, Suffolk, which gave its name to Groton, Massachusetts, and Groton School – one of the most famous schools in America, alma mater of Franklin D Roosevelt.

When Winthrop left his grand upbringing in Old England, he rolled up his sleeves in New England, ‘wearing plain apparel’, ‘assisting in any ordinary labour’.

In The Bostonians, Henry James described the era of the Pilgrims as the heroic period of New England life, ‘the age of plain living and high thinking’ that was dying out. In the 17th century, one English observer was amazed to report after King Philip’s War (in 1675–6, between colonists and American Indians) that one of ‘the great evils for which God hath given the heathen commission to rise against them’ was ‘following strange fashions in their apparel’. The late-17th-century American poet Benjamin Tompson sighed for the Eden of their ‘wiser fathers’, when manners were plain, clothes not European but ‘puritanick capes’, and when graces were so long that the food got cold.

Once the English had settled for a few generations in America, they pondered how much their culture should build on European civilisation. William Bradford was happy to measure the founding of Plymouth Colony against the legends of classical Rome. He likened sailing to the New World to an episode in Seneca, and the Plymouth Colony’s smallholdings to the early days of ancient Rome.

Two hundred years later, the 19th-century philosopher Henry David Thoreau wanted to differentiate the youthful democracy from what he perceived as an alien continent. If not exactly wicked, Europe was just too distant for Americans. While Boston literary circles sighed nostalgically, comparing themselves to the ancients or even the Elizabethans, he responded feistily, ‘A living dog is better than a dead lion.’

Are there many traces of the Mayflower generation’s characteristics in today’s modern Americans? Is religion still as important; are they still as earnest? In 1952, the Pulitzer prize-winning Harvard historian Samuel Eliot Morison claimed the Pilgrims as ‘the spiritual ancestors of all Americans, all pioneers [because of their] ardent faith in God, a dauntless courage in danger, a boundless resourcefulness in the face of difficulties, an impregnable fortitude in adversity’.

There is a far higher murder rate in modern America than in modern England. In the past few years, police behaviour in some states towards the ethnic minorities has reached a new level of brutality.

Yet creating a civil society through the traditions associated with small-town life – whether it’s churches or schools, proms or parades – remains a cherished aspiration, even in the big cities.

After all, Barack Obama chose to be a community organiser in Chicago after Harvard Law School – an institution that normally leads on to Wall Street. The Developing Communities Project in Chicago, which Obama led in the mid-1980s, was a way of making sure the voices of people in social housing were heard.

The Pilgrim Fathers would have approved of that.

Brough Scott's Tip For The Derby

Welcome back to the wild