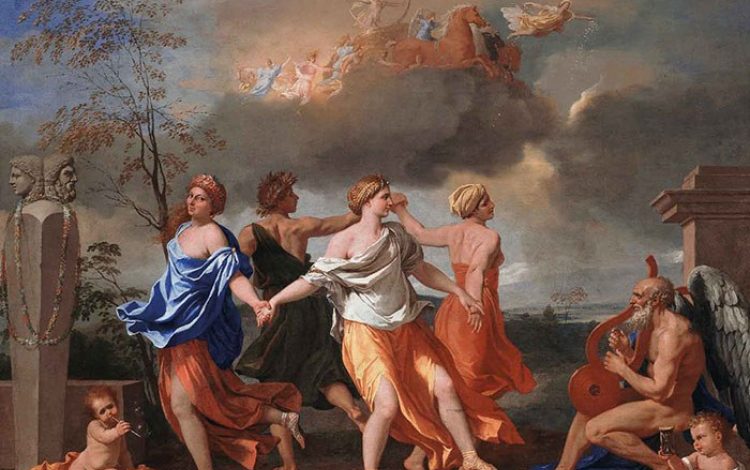 A Dance to the Music of Time by Nicolas Poussin, c 1634-36. From left: Pleasure, Poverty, Riches, Labour. Time plays the lyre
View Full Size
1
of 1

Huon Mallalieu revels in making a visual connection between Poussin's A Dance to the Music of Time, being shown at the National Gallery, and Anthony Powell's book.

Like many other people, I spent one or two lockdowns re-reading Anthony Powell’s A Dance to the Music of Time.

At the outset, he explains his appropriation of the title of one of Nicolas Poussin’s most famous paintings, ‘in which the Seasons, hand in hand and facing outward, tread in rhythm to the notes of the lyre that the winged and naked greybeard plays’.

The musical nature of Poussin’s art was also noted by Helen Hillyard, introducing a Dulwich Picture Gallery exhibition five years ago, in reference to his first series of the Seven Sacraments: ‘Every juxtaposition was carefully considered, where a rhythm of figures cascades into the drama of each scene.’ As this show demonstrates, there is a great deal of dancing in Poussin.

Poussin was born in 1594 in Normandy, the son of an aristocrat fallen on hard times. At 18, he ran away to Paris. Despite making a modest start, he did not fit into the French art world. In 1624, a patron enabled him to travel to Rome where, with one short interlude, he remained until his death in 1665. There, with his younger contemporary Claude, he established the formulae of the ‘ideal landscape’, which infused European painting for the next two centuries.

Poussin’s methods were described by Joachim von Sandrart, who saw him at work in 1635, and wrote it up 40 years later. He ‘went sketching with friends; then first made two or three quick composition sketches. Next he modelled small, wax figures in the nude, placing them on a smooth board squared in a grid. He dressed them in wet paper, taffeta, &c’, marking the relationships and distances with thread.

This last technique is similar to Gainsborough’s ‘tabletop arrangements of stones, pieces of mirrors, broccoli and the like’. Until 13th February, a show of early Gainsborough landscape drawings is at York Art Gallery. It includes 25 recently attributed examples from the Royal Collection.

One of the valuable features of this National Gallery exhibition is that the 20 or so exhibits include preliminary drawings as well as finished masterpieces. There are also antiquities Poussin sketched, and a reconstruction of some wax figurines.

Now that the Wallace Collection is allowed to lend, A Dance to the Music of Time is there, as is a preparatory study from the National Gallery of Scotland. A great deal changed between them, including the removal of a sturdy palm tree separating Time from the dancers. I am intrigued that the painted Time appears to be blind, while in the drawing he is merely absorbed in his music. Is Time shown sightless anywhere else?