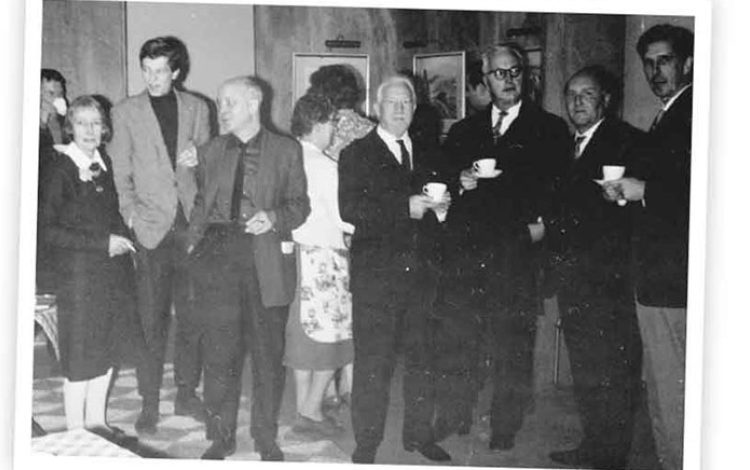 There was something of a craze for poetry readings during the 1960s. Poets were in high demand up and down the land and one of the most popular performers on the circuit was Stevie Smith, whose fame was at its zenith. With her idiosyncratic voice (a kind of nasal drawl), her birdlike movements and her childlike mode of dress, she was a riveting sight. She died 50 years ago, in 1971, aged 68.

In 1965, when I was 14, I attended one such event at the annual arts festival held in my home town of Stroud. Smith and her fellow poet Patric Dickinson (after whom I had been named) were appearing there together on a Saturday afternoon before embarking on an Arts Council tour of the south-west.

My principal reason for going along was to hear my namesake, whom I had yet to meet, but, like everyone else, I was mesmerised by his companion on the rostrum. She enthralled the audience as she recited, intoned and even sang her verse. As she was best known for her concentration on the morbid and the melancholy, it was perhaps inevitable that she should include Not Waving but Drowning, already her signature piece.

There was a tea party afterwards, to which I was invited. Other luminaries from the world of the arts were present: Ursula Vaughan Williams (the composer's widow, who had presided over the reading), the poet Clifford Dyment, the composers Michael Tippett and Edmund Rubbra, and Eric White (Assistant Secretary of the Arts Council and biographer of Stravinsky).

I collected all their autographs and took a group photograph, which I still have. The image it captures is very much of its time – most of the men in jackets and ties, several of the participants smoking, Stevie the only woman in the group.

In this exalted company, a schoolboy in his early teens was doubtless an unwelcome presence. But Stevie Smith was very sweet to me, sat me down and with penetrating eyes asked me about myself – what I was studying at school, what I enjoyed doing and other such questions but not (as far as I can remember) what poetry I liked. In the photograph I took, she is clutching a cigarette and wearing (as she often did) the collar of a white blouse over the top of her dress. But for some reason it is her knitted stockings of which I retain the most vivid memory.

Patric Dickinson (1914-94), aware of Stevie’s popularity with audiences and happy to acknowledge it, tended to cut his own recitations slightly short so that she could command the lion’s share of the time available. It was he who wrote the introduction to her final collection of poems, published posthumously in 1972.

It was the first of many encounters I had with my namesake (who was no relation, my parents having merely seen his name in Radio Times in 1950). But it was the only time I met Stevie Smith. She returned to the Stroud Festival to give another reading in 1970, a few months before she died. By then, I was away at university and therefore missed a second bite at the cherry. But I have never forgotten her kindness to a schoolboy all too clearly a fish out of water, something that she perhaps always felt herself to be.

Losing the battle for hearts and minds: Right-wing mainstream press had little effect on the election