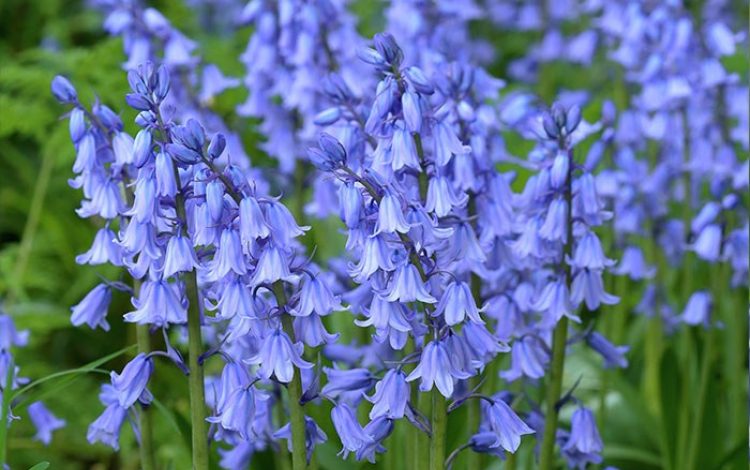 Now is the time that bluebells make such a pool that the earth becomes like water. By David Wheeler

I’m a gardener – not a botanist.

I can, however, identify numerous wildflowers in the steep, ferny banks of our long drive. Just as we altered the clocks, I made a mental checklist of the gems I could name.

Surprisingly (because they began flowering in January), we still had snowdrops in deep shade at the end of March, accompanied by a galaxy of celandines (‘little suns at winter’s end’), whose shiny yellow petals reflect the great orb’s rays like polished brass.

My two heavyweight wildflower references are Geoffrey Grigson’s The Englishman’s Flora of 1955 and Richard Mabey’s 1996 Flora Britannica, both uncomfortably heavy for the stroller’s knapsack.

But, open on the kitchen table, they divulge the fabulous world of horsetails, bog-myrtles, purslanes, loosestrifes, fumitories, orchids, rushes and milkworts, to name but a few.

In places, our long drive has banks reaching a height of eight feet. Ferns rule, while the rich assortment of other inhabitants (including ash, elder, holly, hawthorn, beech and – yes – brambles) fight it out among themselves for the perfect lodging – sun or shade, dry or moist. Thankfully, the primroses are all of a proper, uniform, ‘primrose’ colour, devoid of such impure mutants that regrettably yield wishy-washy pink or mauve flowers.

It would be impossible to say whether our two native daffodils (the Tenby daff, Narcissus obvallaris, and the Lent lily, N pseudonarcissus) have occurred naturally or been raised from bought bulbs. Whichever, they are indispensable and seed around agreeably, siting themselves impeccably.

Violets (Viola riviniana – the dog violet) are never more at home than in deciduous woods and hedgerows and unmanicured churchyards and along country lanes. Sadly unscented (that’s the job of close relative V odorata), it nevertheless graces the surrounding herbiage with Seurat-like pointillist splashes of what John Clare called ‘feeble flowers/ Peeping faintly purple’. I for one would argue against the poet’s use of the word ‘feeble’.

By the way, Grigson tells us that the great herbalist Gerard (c 1545-1612) called Viola canina’. Hence ‘Dog Violet is really a book name, though Dog, like Horse, is a common English prefix for distinguishing an inferior species from its superior relative.’ Think dog rose, horse chestnut…

No such demeaning term need be applied to our native bluebell (Hyacinthoides non-scripta, not to be confused with the brutish Spanish bluebell, H hispanica). It perhaps deserves span class="Apple-converted-space">

And how swell the bluebells look, contrasting with the lime-green rugs of the impressively beautiful but inelegantly-named opposite-leaved golden saxifrage (Chrysosplenium oppositifolium) – an ancient woodland indicator here in Carmarthenshire, identified for us by a visiting friend who, unlike me, is both botanist and gardener.