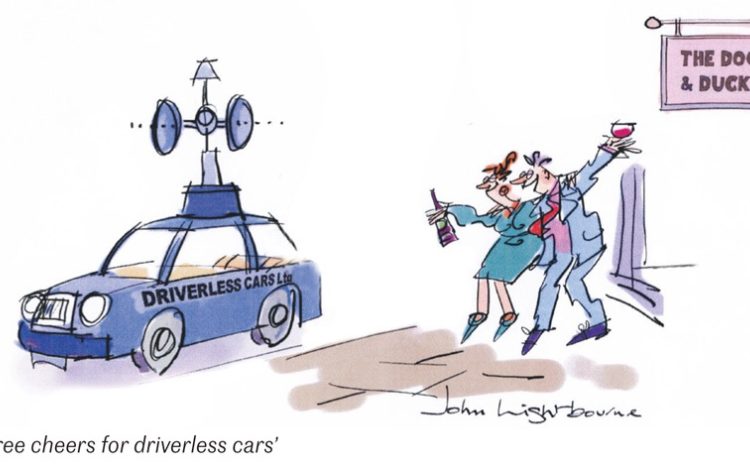 ‘The Greeks, it seems, are a fairly anarchic lot, who don’t like being bossed around, least of all by machines. One should disapprove but it’s hard to suppress a wave of fellow-feeling’

Back in the early Fifties I regularly read a comic that featured characters buzzing about the sky with small jet engines attached to their backs. This was supposed to provide an exciting sci-fi vision of the future, but as a stodgy, law-abiding child with no head for heights, I thought it an appalling idea, and hated the very idea of the sky being cluttered up with men in suits or smartly turned-out women droning noisily overhead. Sixty years on, drones are not only revving-up to deliver parcels and groceries to our homes, but threaten to bring down passenger jets when left in the hands of terrorists or halfwits. Why, one wonders, are these intrusive and potentially lethal gadgets on sale on the open market? No doubt most of them are sold online, but whenever I go to an Oldie literary lunch I pass a shop in the Strand crammed with the beastly things. No doubt it’s also well stocked with lasers, recently used to blind or dazzle the pilots of civilian aircraft. A dose of brisk banning is called for.

A better-intentioned modern irritant is the voice fitted to the posher type of car that tells one to fasten one’s seat belt, and won’t lay off until one has obeyed its commands. I couldn’t help being unworthily amused when I learned recently that in Greece there is a brisk sale of clips without the seat-belt attached, so enabling car-owners to thwart that awful voice without having to struggle with the belt itself. The Greeks, it seems, are a fairly anarchic lot, who don’t like being bossed around, least of all by machines. Of course one should disapprove, but it’s hard to suppress a wave of fellow-feeling.

Prompted by Denis Hamilton of the Sunday Times, who boosted his paper’s sales no end by acquiring the serial rights in the memoirs of Monty, Alanbrooke, John Betjeman, Somerset Maugham and Lady Diana Cooper, the Sixties and the Seventies were a golden age for those authors lucky enough or famous enough to catch an editor’s eye. So excessive were the sums sometimes paid that at some point newspaper proprietors got together and agreed some kind of limitation on how much they’d pay, as a result of which the value of serial rights suddenly dropped, and has never recovered.

Nowadays they would probably be accused of acting in restraint of trade, but I can’t help wishing that public bodies in particular, funded by the tax-payer, could follow their example and agree not to pay the ludicrous salaries offered to – say – managers in the NHS, let alone the golden handshakes and farewell offerings the rest of us read about almost every day, gnashing our teeth with rage over our breakfast cereals. The salaries paid to top dogs in the public as well as the private sector are gross, and out of all proportion to their talents and to what the rest of us earn, yet they are invariably justified on the grounds that employers must pay the going or market rate. Salt is rubbed into the wound by the sheer incompetence of some of these professional managers – who, if eventually booted out, are bound to pocket a sizeable severance package.

The College of Policing, whatever that may be, recommends that new recruits should take a degree in policing rather than learning the job on the beat: yet another example of the way in which academic knowledge is given priority over experience. One of the problems with many jobs nowadays is that they are so high-tech, which may – to some extent – explain or justify modern nurses learning in the classroom rather than from matron: but can this be true of policing? I’ve spent all my working life in the literary world, and I’ve always been struck by the fact that although publishing is widely (and wrongly) regarded as a rather highbrow business, all the best publishers in my lifetime – Allen Lane, Jonathan Cape, Paul Hamlyn – left school at sixteen and worked their way up from the bottom, learning from experience how to deal with booksellers, printers, binders, paper merchants, libel lawyers, literary agents and, in due course, the authors themselves. Publishing is, in essence, an entrepreneurial business – something that can never be taught at university.