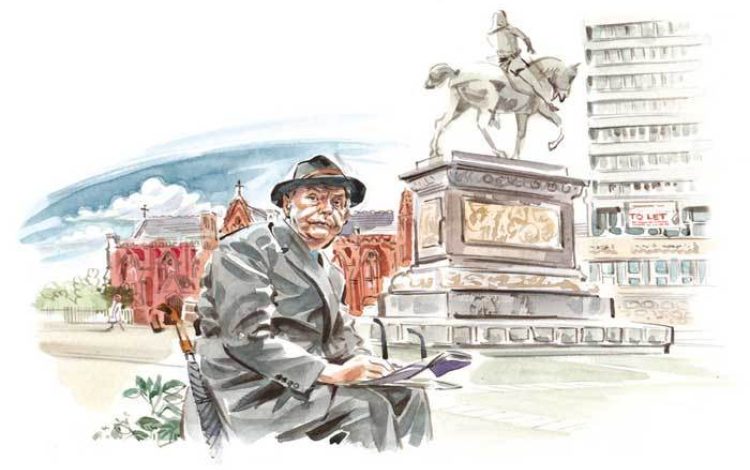 Part of the interest in reading a Betjeman poem lies in wondering whether he will fall off the tightrope.

Those thumping metres; those clunking rhymes; that tone compounded of the arch, the sentimental and the twee – will he once more, against all the odds, produce a work of art, or will he lose his balance?

It is daredevil stuff for writer and reader alike. Philip Larkin, one of Betjeman’s most discerning critics, wrote of his ‘vivacious affection that shimmers continually between laughter and rage’; his compound of Tennyson and Hardy, music-hall turn and saloon bar singalong, which made a virtue of anti-modernism. Beneath the knitted tea cosy, the pot could contain a brew unexpectedly strong, even scalding. There might be a dash of rum in it – or arsenic.

Reading Kevin J Gardner’s collection (still only a selection: 83 out of a possible 150 items) of ‘new’ – ie previously unpublished – and uncollected poems by Betjeman, written between 1924 and 1979, one naturally asks how many of them are good enough to stand beside the familiar body of work. The answer is: more than you might expect.

Wisteria Branches) sounds like bargain-basement C Day Lewis – and the examples of commissioned occasional or dedicatory verse are mostly slight: an early Romanticism modulated into something more astringent. Stronger poems come from magazines or university archives, commentaries for films or TV programmes; among these, the longest poem in the volume, The Finest Work in England: I>span class="s7"> K Brunel – the soundtrack to a 1966 BBC documentary – condenses a whole industrial history into 300 outstandingly skilful lines.

There are a few surprises. A Poem by My Old Bear Archibald, which Bevis Hillier suggested was a nonsense poem, has a disquieting surreal quality, somewhere between Magritte and Dali. Order Reigns in Warsaw, written in 1941/1942, is a rare political intervention remarkable for its contained anger. Lines on the Unmasking of the Surveyor of the Queen’s Pictures, which first appeared in Private Eye, is perceived by Gardner to be a genuine Betjeman poem about Anthony Blunt (a fellow Old Marlburian). In reality it was an inspired pastiche by The Oldie’s founding father, Richard Ingrams, and Barry Fantoni.

Sweets and Cake, a mischievous account of a romp between two public schoolboys (in couplets, appropriately), has already been sufficiently goggled at in the press, although it really should have been no news to anybody acquainted with Betjeman’s biography.

Otherwise, the familiar properties are here: social satire; beady-eyed observation of class differences (The Wykehamist at Home); every hue in the liturgical spectrum of Anglicanism (The Divine Society and Not Necessarily Leeds) and some sly digs at nonconformity (Zion); the loving evocation of architecture, landscape, sea and sky; the perfect pitch with brand names. There is the odd macabre twist in the tail (Emily Wrenn and The Corporation Architect) and a smattering of jolly hockey sticks (The Most Popular Girl in the School).

There are, too, the expected targets: soulless capitalists, business corporations, town planners, ecological vandals and trendy modernisers of every kind. Yet if Betjeman is sometimes an old fogey, he is an old fogey with taste. He does not want the past tout court but the best of what remains, and not just for itself but for the variety of human life to which it bears witness. Who Took Away… protests against the boundary revision and renaming of English counties in 1979 as an attempt to abolish history. The intimate link between land and people is a recurring preoccupation, and there is always an aesthetic aspect to Betjeman’s antiquarianism.

Gardner sensibly does not claim to have discovered neglected masterpieces. He explains that the composition of the Collected Poems was a hit-and-miss affair, owing to Betjeman’s self-doubting overreliance on other people’s judgement and the chaotic state of his papers. His introduction and notes provide ample context, although he misses a few things – including an intentional comic misquotation from Oliver Goldsmith’s The Deserted Village in Clifton 1940 and a parody of Othello in the prologue for the 70th anniversary of the Dublin Gaiety Theatre. Two appendices give drafts of a version Betjeman made of a poem by Fernando Pessoa which was set to music by Bliss, and a send-up of Nikolaus Pevsner in heavily Teutonic English.

The future editor(s) of a new, more substantial Collected Betjeman will owe a great debt to this volume.