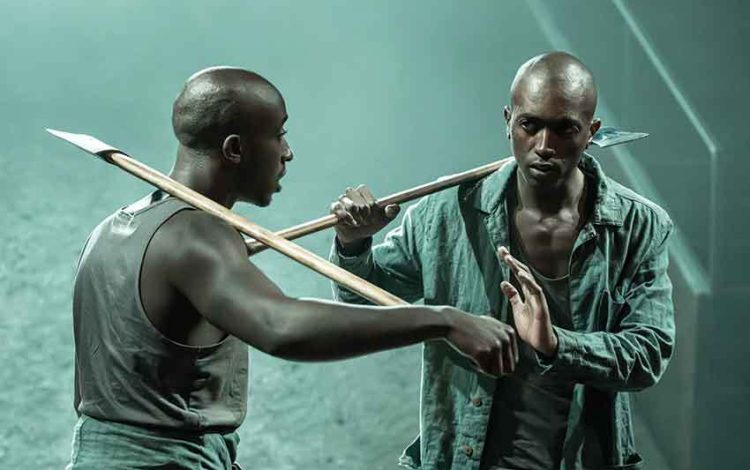 The first thing you notice when you sit down to watch Blood Wedding is a patch of blood in the middle of the stage. (There’s no curtain at the Young Vic, this being a theatre in the round.) Uh-oh, you think, this isn’t going to end happily.

And the play begins with an old woman (Olwen Fouéré),white locks flowing, coming on and cleaning it up. Nothing in her manner, or the lighting or the music – a low, almost subsonic throb – makes you think this has made things better.

Federico García Lorca’s play, written in 1932, was his first success. Set in a rural Spanish backwater, its story (based on a true story he read about in the newspaper) is simple: a young man from the García family marries a young woman; she then absconds with her previous lover, from the Felix family, who have been feuding with the Garcías since who knows when; the young man, and the outraged village, follow them; the two men fight – and kill each other. The end.

The power of the play lies in its language – and indeed in the way it is staged. I haven’t really given anything away: there is nothing to suggest that there might be even a plot twist. Everything happens with grim inevitability. ‘Grim inevitability’ sounds like a cliché, but here it irrefutably applies.

Marina Carr has translated the setting to rural Ireland: ‘Andalucia County Offaly’ she calls it in the programme. The idea, clearly, is to bring the notion of an elemental, primal existence riven by ancient feuds closer to an English-speaking audience.

It works. It might sound like Synge with surrealism and Spanish references, white-haired old crones and beefy young men doing de ole blarney, but such is the power of the writing and the performances (and the staging, which is marvellously atmospheric) that this hardly crosses the mind.

The whole production is in fact a masterclass in how to put on a play of this type, in a venue of this type.

There’s a bit when Leonardo Felix, the man who steals the bride (Gavin Drea and Aoife Duffin respectively), grabs a wire hanging from the ceiling and then runs around the stage, his feet barely touching the ground, and you realise, with a kind of childlike wonder, that this is him riding a horse.

Later on, the bride, fleeing her wedding, has to do the same circuit, but it’s further (she’s on the outside) and she’s holding his hand, so she can’t do the same flying through the air with the greatest of ease. At first, I thought this was a slight failure of stagecraft, albeit a probably inescapable one; but on reflection it looks like a quietly eloquent statement about the relative status of men and women.

And this is the great thing about this play, or rather this version of it: it doesn’t belabour its points. The Irish resetting is not a problem; mapping this onto lines or references that are very Spanish – climate, geography, gypsies, Moors and so on – very soon stops involving any major mental readjustment or indulgence. What happens instead is that it becomes timeless and placeless, and the minor mental readjustments you still have to make serve only to make you think a bit more about the play itself.

The cast: uniformly excellent. As we are dealing with archetypes here, there is little room for range, or even subtlety. Everyone on stage is in the grip of geography, violent human nature, and history. That being understood, everyone acts flawlessly – particularly Fouéré and Duffin, half insolence, half misery. Thalissa Teixeira as the moon (dark-skinned, in a white silk suit) sings, like a one-woman chorus, about ‘la luna Gitana’ and such, to maximum effect.

Perhaps Lorenzo is given too much to doing that arms-raised-parallel-to-the-ground position, which suggests both crucifixion and an extremely earnest invitation to a fight, but he does it with his shirt off, which is how it ought to be done. (I write as someone who looks at men with their shirts off only on aesthetic grounds. If you like men with their shirts off on other grounds as well, then you won’t be disappointed; and I am not being entirely flippant here, as this play, in this production, is darkly and deeply wise about sex.)

This couldn’t have been done better in any other medium. The fixity of perspective, which can make theatre look like cinema’s poor relation, has been addressed by people who really know what they’re doing. I was in the front row (which is a very good place to be at the Young Vic), but I bet everyone, for different reasons, thought they had the best seat in the house.

So this is theatre done very well indeed.