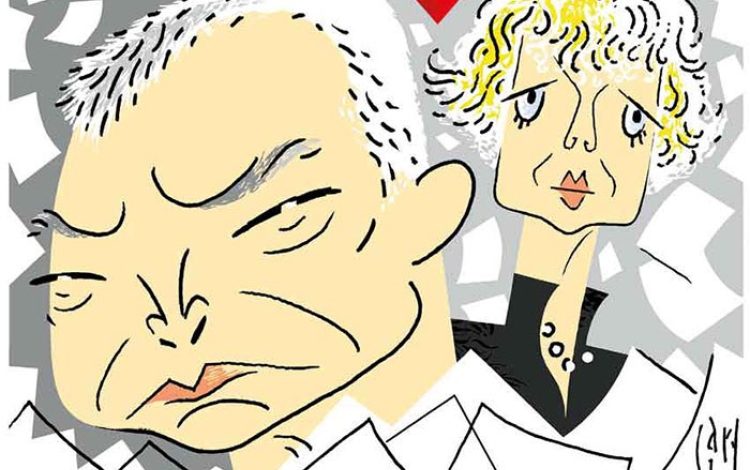 Gosh, it feels good to be back in a proper theatre again!

It’s all very well watching plays on YouTube or whatever, but nothing beats the smell of the greasepaint and the roar of the crowd.

Granted, going to see a play is still rather a subdued affair: drinks brought to your seat in plastic cups; social distancing throughout the theatre.

And granted, this is rather a subdued play: no set to speak of, just two actors sitting at desks, reading out a series of letters stretching over half a century. Put like that, it sounds deadly dull – and, having never seen A R Gurney’s Love Letters before, I didn’t have high hopes.

I was delighted to be proved wrong. This is a moving, engrossing drama, graced by two superb performances from Jenny Seagrove and Martin Shaw.

You’ll have seen both these actors on TV countless times; there’s always a special thrill about seeing such familiar figures in the flesh. But there’s a lot more to this tender drama than the novelty of watching two telly stalwarts up close and personal.

Shaw is 76; Seagrove is 63. Although they could both easily pass for 20 years younger, there’s a subtlety and vulnerability about their work in Love Letters that comes only with age.

Good looks are an asset for an actor starting out, but they can easily become a burden, confining actors to superficial roles and restricting their dramatic range. Shaw is still just as handsome and Seagrove is still just as beautiful, but there’s now a fragility about them that adds a new dimension to their art.

Love Letters was written in 1988 by Gurney, an American, as an epistolary novel. But when he sent it to the New Yorker, they said, ‘We don’t publish plays.’

So he tried it out as a rehearsed reading. It went down a treat and it’s since been staged loads of times, all round the world, starring everyone from Charlton Heston to Mia Farrow.

As Gurney pointed out, one reason it’s performed so often is that it’s so easy (and cheap) to stage: ‘This is a play, or rather a sort of play, which needs no theatre, no lengthy rehearsal, no special set, no memorisation of lines and no commitment from its actors beyond the night of the performance.’

This has made it a useful standby in any crisis. This production premièred before the last lockdown, when theatres were open but forward planning was impossible.

But it would be unfair to say all the actors need to do is turn up and read the lines. Shaw and Seagrove have scripts to hand, but this isn’t just reading – this is acting. Watch their faces as they listen to each other and see the growing sadness in their eyes.

Although they only ever meet up a few times thereafter, they remain in touch by post, and their long-distance relationship becomes increasingly intimate, even as their lives diverge.

Andrew follows his head; Melissa follows her heart. Yet neither of them ends up truly happy. He becomes a lawyer, then a senator. Her world unravels. They both marry other people, but they really open up only to each other, despite (or maybe because of) the fact that they hardly ever come face to face.

Though we yearn for them to get together, as the play evolves we begin to wonder if these letters have taken them down a different path, to a place where they know each other too well for romance.

In some respects, this is a profoundly pessimistic story. Neither character is able to break free from the shackles of their upbringing, however hard they try. Yet it reminds us that there’s nothing more precious in this world than loving someone, and that reminder sends you out on the sort of special high you get only from seeing first-class actors on stage.

Yes, you could say this is only half a play – it would work almost as well on the radio. But, in these trying times, half a great play is infinitely better than half of nothing.

Love Letters made me eager to read more A R Gurney, and see more of Martin Shaw and Jenny Seagrove. Above all, it made me resolve to sit down and write a letter to a lifelong friend.