Make your will now - Hilary Macaskill 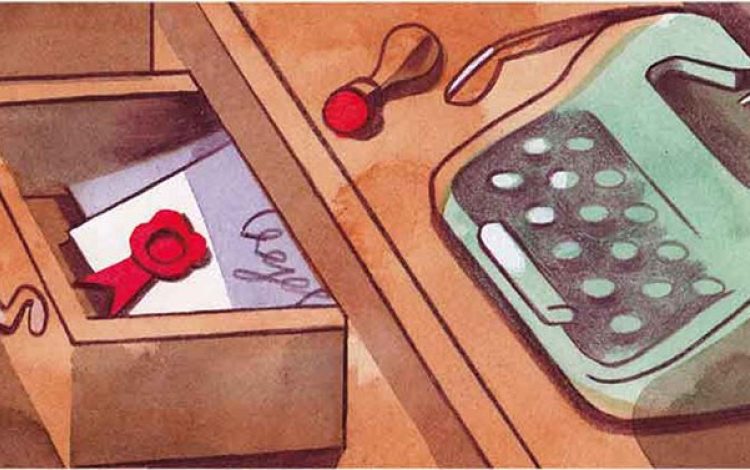 When Great-Uncle George died, he left behind a mourning family – and financial chaos. By Hilary Macaskill

When my husband, Michael, agreed to be his great-uncle’s executor, he didn’t know what he was letting himself in for.

All it involved then was typing the handwritten will (signed and witnessed), with inserted amendments, and returning it for signing.

Great-Uncle George, by then, was in a nearby care home. We loved his dry sense of humour, which survived to the days before he died, aged 90. Or perhaps even beyond. In his drawer was the original handwritten will, rendered illegible after a spillage. But the typed will, naming the executor, had disappeared. His last provisions would be invalid. In this case, the first duty of executor was to find the revised will.

We turned to the bank, his employer for 41 years, finding a deed box – but no will. We tried his solicitor and combed his papers for clues: was a cryptic note ‘Knight Security’ the key to the mystery? It was the name of a locksmith.

We realised his jacket and wallet were missing. We rang the home. Briefly lifting our spirits, the warden reported the jacket had been found – but no wallet. He phoned again. The wallet had turned up; and the will. I drove there and bounded into the warden’s office. ‘Here it is,’ he said. ‘The only thing is – it isn’t signed.’

It was hard to grasp. Great-Uncle George, a meticulous bank clerk, had carried his will in his wallet for four years without signing it.

At least it was possible to decipher the original will, and matters proceeded. Michael, along with Great-Uncle George’s niece, took out joint letters of administration – in effect, the same as being executors. As messenger, I took both wills to the Probate Office. A clerk with drooping moustache, and drooping spirits, examined the original – the only relevant one in law – with studied indifference.

‘It seems to have had coffee spilled over it,’ I ventured.

‘Looks more like tea to me,’ he rejoined dourly.

‘Do you think you’ll be able to prove it?’

‘I should think so,’ he replied loftily. ‘We’ve had worse. Yesterday we had one in a thousand pieces.’

The will was proved. It involved writing to the four people who would have benefited, had he died intestate, to ensure they had no objections – but it was allowed as intended except, ironically, for the legacy to the executor.

Dated scraps of paper showing the many calculations of legacies – and the money in hand to cover them – were given to the Probate Office to demonstrate that the provisions in the typed version reflected Great-Uncle George’s intentions. They also established that a legacy of £1,000 to the executor was added after the first will. He’d probably reasoned that the executor deserved recompense as the time spent would be considerable.

It certainly was. Granting of probate was just the first step. There wasn’t much involved, but the many bequests meant letters, meetings and transactions, such as the selling of shares – all with the Which guide to Wills and Probate close at hand. One fortuitous result of the delay was that the shares rose in value, which meant there was enough to cover bequests.

The main problem was tracking down the prime beneficiary, who lived in France. The last-known address yielded no response. So Michael phoned the French Embassy: ‘I’m looking for a Frenchwoman who has been left money in a will.’

‘Aah,’ said the amused lady at the embassy with barely a moment’s pause, ‘You ’ave found ’er’.

It turned out that the mysterious Frenchwoman was the estranged widow of a deceased nephew who’d left his small estate to his uncle – who wished to return it to the person he felt should have received it. Fifteen months later, she was found, and all bequests paid – even to the charities named in the will who’d made sure of their rights by writing within days of the will’s being registered. There was enough left for those who would have benefited to agree to allocate Michael the legacy disallowed by the Probate Office.

We made our own wills that year – and signed them. Great-Uncle George would surely have approved.

Win a copy of Love and Miss Harris by Peter Maughan