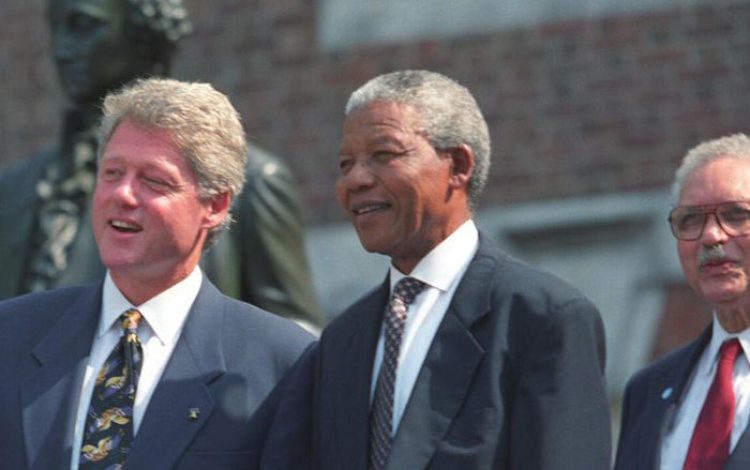 Ahead of the 2019 Rugby World Cup in Japan, Jim White reveals how Nelson Mandela helped the Springboks win the 1995 final

According to a man who has done it, there is only one thing you need to guarantee winning the Rugby World Cup.

Morné du Plessis was the manager of the South Africa side that lifted the Webb Ellis trophy on home turf at Ellis Park, Johannesburg, in 1995. He recalls that every side in the competition that year had the best players they could muster, brilliantly prepared and conditioned. But unlike his Springbok side, there was one thing the representatives of New Zealand, England, Ireland, Scotland, Wales and Australia didn’t have: Nelson Mandela delivering the team talk ahead of the final.

‘I remember there was a knock on the dressing-room door before kick off,’ du Plessis told me recently. “I opened the door – because that was my job, along with locking it when the players went on to the pitch – and there was Madiba. He said, ‘Morné, can I come in?’ Well, normally, it is a sanctuary, the dressing room. No outsider can come in. But he had this look which suggested there was no way I could refuse. So in he came. And what he said, I have no doubt, made the difference. His words won us the World Cup.’

As it happens, this was no Henry V tub-thumper of a speech. There was no verbal sabre-rattling from Mandela. What he did, according to du Plessis, was simply go up to each player individually, shake him by the hand and and quietly tell him he was proud of him. And Mandela did this while wearing the green and gold Springbok shirt. As a gesture, it was extraordinary: he had been imprisoned for 25 years by the state that regarded the very shirt he was wearing as a visual metaphor for its purpose. As turbocharging went, his act of quiet forgiveness and generosity was rocket fuel.

Du Plessis realised there was no point in his adding anything. His prepared speech was consigned to the bin.

In sport, saying the right thing has always counted. Alf Ramsey’s line ahead of extra time – ‘You’ve won it once; all you have to do is go out and win it again’ – was pivotal in England’s 1966 triumph.

Sir Alex Ferguson’s pointed ‘Lads, it’s Tottenham’ was enough to thrust his Manchester United players to victory over Spurs. And England manager Gareth Southgate once revealed how disappointed he had been as an international by the lack of oratory from one of his predecessors. ‘We needed Winston Churchill,’ he said of Sven-Göran Eriksson’s half-time talk during a World Cup quarter-final. ‘And we got Iain Duncan Smith.’

Hollywood has even made a movie centred on the art of the dressing-room oration. Al Pacino’s magnificent ‘inch by inch’ homily in the American football drama Any Given Sunday is a glorious call to arms, delivered in a voice that barely rises above a whisper. This speech has been borrowed countless times by coaches in every sport in every land. No doubt there will be a coach borrowing it at the forthcoming Rugby World Cup.

Mandela’s, on the other hand, can never been replicated. When the successors to Morné du Plessis’s South Africa side arrive in Japan for the 2019 version of the competition they won with such passion 24 years ago, the players, du Plessis says, will have to rely on more basic qualities. ‘How does South Africa win the World Cup this time?’ he said. ‘They just have to be better than everyone else. Oh, and lucky.’