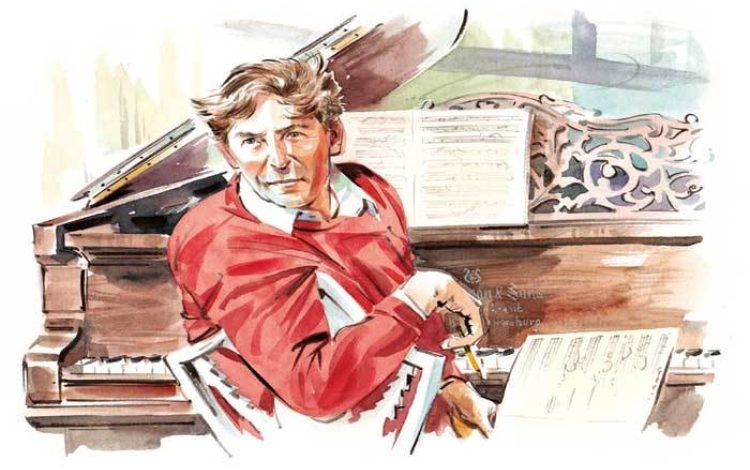 It may seem an odd time to bring out a 750-page biography of a composer whose music, the author admits, has been more or less completely obliterated from concert and opera schedules since his death in 1998.

But though Tippett was always a divisive figure, both in music and elsewhere, I guess that not many would quite agree with the bald assessment of one newspaper headline, quoted by Oliver Soden: ‘Michael Tippett – a composer to forget’.

Reading Soden’s brilliant, sympathetic but by no means hagiographic account, one relives many of the irritations from the time when the now septuagenarian teenager-composer was peopling his operas with characters called Astron, Olympion and Magus, and putting into their mouths phrases like ‘Screw him, he’s a loser!’ and ‘A man is for real, baby,’ while himself going round in trainers and flower-print jeans.

Or the earlier time when his pacifism required him to live at friends’ expense rather than accept work with ENSA as an alternative to war service. But everyone who knew Michael Tippett (I did, slightly) knew him as a deepcly conflicted, profound but often naive thinker with an artistic genius constantly challenged by a shortage of natural talent. This ought to make him an abidingly interesting study even for those who dislike or despise his music – a surprising number, it seems. For the rest of us, who love at least some of his work, a long life so well told opens doors.

His life span (1905-98) was more or less that of the century, and it embraced many of the century’s neuroses. Tippett’s father was a property investor, an intellectual agnostic, who lost two fortunes and was almost imprisoned for fraud. The mother was a suffragette who actually spent time in prison, and seems to have been a Mrs Jellyby, who preferred good causes to looking after her two sons. Somehow, from a not particularly musical background, Michael got into the Royal College of Music on what Soden calls ‘enthusiasm, and some evidence of unharnessed ability’, having decided long before that he wanted to be a composer. He had turned himself into a decent pianist, and was in fact soon composing – though most of what he wrote before the 1930s is lost. Then, in the 1930s, he turned to political activism, and composed only spasmodically until the Concerto for Double String Orchestra of 1938-39, his first fully individual score.

Soden’s detailed account of this period includes much new material. Tippett’s ‘one-eyed pacifism’ (in Orwell’s phrase) was always well known, not least because in 1943 it landed him in Wormwood Scrubs for two months as a conscientious objector. Not previously known – because he himself drew a veil over it – was the extent of his political activities before the war. For a time, he was a card-carrying Communist, a close friend of the inveterately Stalinist composer Alan Bush; then a Trotskyite fully engaged in meetings and pamphleteering and organising workers’ concerts. By a delicious irony, he was eventually expelled from the Trotskyist Workers’ International League because of his pacifism. But by that time he had discovered Jung and become more interested in the ghosts of the past than in the revolution of the future.

Meanwhile he was tempting the law in another important way – illegal sex. Abused at Fettes, he was soon thereafter fully active, starting (rather surprisingly) with the future Gloucester organist Herbert Sumsion, then proceeding through a long line of – mostly – younger men, with whom he formed complicated, sometimes duplicitous, live-in relationships, while apparently yearning to marry and have children. He proposed to several women, one of whom – Francesca Allinson – was clearly in love with him but failed to arouse him sexually. Soden’s account of her suicide in 1945 is one of the most moving passages in this often affecting book.

Behind everything was a very obvious need for love, and also a constant desire for the refreshment of young minds and bodies. These are deep emotions, yet one half-sympathises with William Walton’s reaction to the last change: ‘At his age, getting himself a new boyfriend – he ought to be ashamed of himself!’

None of this tells us much about the music, or why it has fallen so dramatically from grace. I once asked Tippett whether his late maturity had caused him anxiety. He said, ‘No, because I knew I was right.’

And the early works, from the double concerto and A Child of Our Time to The Knot Garden, seem to prove he was. But later the doubts creep in: the relentless post-1960s trendiness, the muddled libretti and the confusion of intellectual and musical influences that clog up even his best scores. It’s all too easy to see why these late works, so difficult to play and expensive to put on, often so lacking in clear artistic direction and so annoyingly modish for all their frequent beauty, should struggle for survival in the absence of their highly marketable begetter.

Soden discusses them, without technical analysis, but with plenty of musical intelligence. But even his enthusiasm is sometimes muted, and we’re left with a beautiful story of what might yet turn out to be a glorious, or even mildly inglorious, failure.