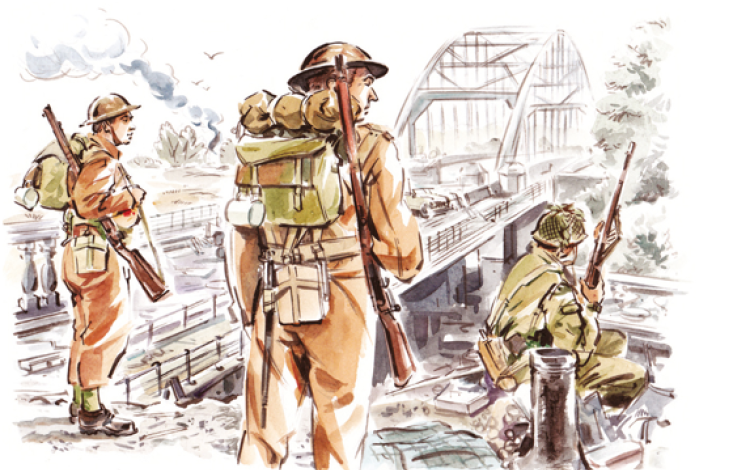 Reviewed by A S H Smyth

By September 1944, the Allied Expeditionary Force had broken out of Normandy, liberated Paris, crossed the Seine and the Somme rivers, and was pushing at the German border. As the hitherto invincible Wehrmacht fled on bicycles, Allied commanders started sitting for official portraits.

But Field Marshal Montgomery and General Bradley were ‘fixated with their own diverging intentions: the British heading north, and the Americans heading east’. Eisenhower, the supreme commander, decided he had to keep the peace, and split his forces – a decision that enraged the rampant General Patton, and which the Germans found quite extraordinary. As the 21st Army Group approached the waterways of Flanders, though, the opposition stiffened, and the Allies began to fear essential bridges would be blown up.

Montgomery’s solution was Market Garden, a ‘bold’ double-op to airdrop soldiers into Arnhem and Nijmegen, and then send the massed land forces crashing through to bolster them.

Absurdly, no allowances were made for anything to go wrong. ‘The Germans, General...’ a Pole had spluttered. ‘The Germans!’

‘It will be some bloodbath,’ one Para colonel stated simply.

The attack began on 17th September – and so improbable was Arnhem that, when the gliders first appeared, one Sturmbannführer soiled himself. But in the eight days that followed, almost everything went wrong.

The jocularly named ‘Club Route’ immediately became ‘Hell’s Highway’. A perceptive Dutchman wrote, ‘Parachutists are being dropped with the idea that they can look after themselves for three days, but then the army has to come to relieve them, and that army has not come.’

On the fourth day, German troops retook the Arnhem bridge, and the 1st Airborne Division was trapped.

The battle steadily degenerated into vicious house-to-house fighting. The words ‘murder’ and ‘massacre’ were freely used, and one German said that it was worse than anything he’d experienced in Russia. A British officer said the shelling was more terrible        than the First World War. Amid the frequent use of flamethrowers and phosphorus, and horrifying conditions, a considerable number of soldiers killed themselves.

Several Victoria Crosses were awarded; all but one posthumously. But after eight days, the British troops were forced to withdraw, amid mutterings of ‘Dunkirk’ and ‘Gallipolli’. Even the withdrawals were horrendous. At Arnhem alone, the British lost almost 2,000 dead, with 7,000 taken prisoner. Some units were reduced to just one tenth of their original roll call. As one lieutenant concluded in an agonising diary entry, ‘It will remain a gesture.’ On 8th October, to forestall a German counteroffensive, the Arnhem road bridge was destroyed – by Allied bombers.

Antony Beevor retells this sorry story with the clarity and pace that’s helped him shift some seven million copies of his books: for all the maelstrom of detail, Arnhem feels neither stuffed nor rambling. It is viewed, perforce, primarily from the Allied angle; but is contextualised throughout with civilian vox pops and German war diaries. He is particularly strong on the shameful British attitude towards Polish allies, and the vicious reprisals, looting and systematic starvation visited upon the luckless Dutch for their support. (Anyone not well acquainted with the geography of the Netherlands will want a bookmark in page 34’s map – a diagram of the command structure would have been helpful too.)

With the view that Brits are all too partial to a good ‘heroic failure’, Beevor painstakingly details the fact that this was not a plan that went wrong: ‘It was quite simply a very bad plan right from the start and right from the top.’ Montgomery’s official biographer called Market Garden ‘nothing less than foolhardy’. But at the time, commanders made ‘bewildering’ claims about the operation’s success, and Montgomery himself made the unbelievable remark that it had been ‘ninety per cent’ successful ‘since they had got nine-tenths of the way to Arnhem’.

The Germans didn’t end up winning. But Prince Bernhard commented ruefully that the Dutch could ill afford another ‘Montgomery victory’. Nor could the British paratroopers. The 1st Airborne Division was never seen again in combat.