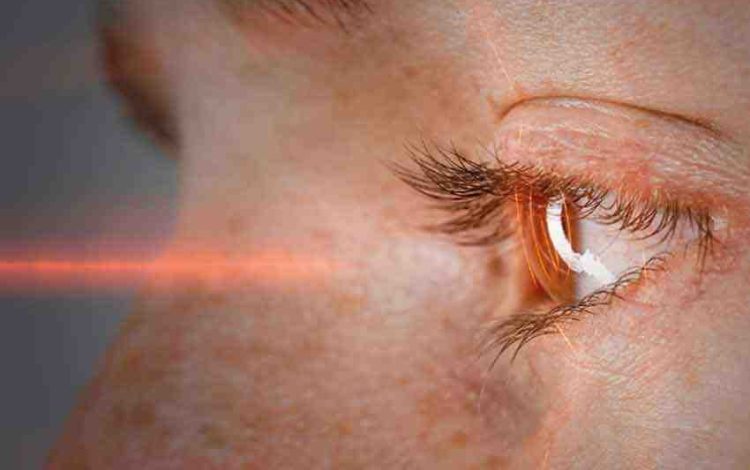 After cancer surgery, Lucy Deedes thought she was tough as old boots – and then she faced the agony of a cataract op

I’ve been in and out of hospital pretty regularly over the last few years.

I was diagnosed with cancer in 2013. So there was surgery, chemo, radiotherapy and the rest. Most of it was far easier to cope with than I expected and, strangely perhaps, it’s been a wholly positive experience. Some people fear hospitals, but I find them a safe place.

So, in spite of an unforgettable operation two years earlier for a detached retina, I breezed fearlessly into hospital for the cataract surgery that inevitably follows eye trauma. I’m as tough as old boots, I thought, and this one won’t hurt at all. Everyone has it! It’s over in a flash! What can possibly go wrong?

Cataract surgery is quick and effective and the most commonly performed operation in the UK. Some 30 per cent of people of 65 years and over have cataracts in one or both eyes, and in England alone 330,000 operations are performed each year: 95 per cent of those will be on those over the age of 40.

At 63, I was much the youngest patient on the morning list, which featured one man and six other women, one in a wheelchair.

Every 15 minutes or so, a nurse gave me eyedrops to dilate the eye, followed by anaesthetic drops just before I went into theatre.

I didn’t smell a rat even when one elderly lady asked, ‘Is this your first time?’ in a solicitous voice, and another confided that it was her second time and that she had learnt some poetry – Wordsworth, Frost – to recite to herself to help her get through it.

In the theatre, my eye with its hugely dilated pupil was clamped open. The eye didn’t much care for this, what with the merciless overhead lights. A sterile cloth was put over my face and an eyehole cut out. Then the irrigation started and the unhappy eyeball was sluiced with water.

A nurse held my left hand and told me to squeeze if I needed, but obviously you don’t want to make a fuss. So instead I plucked holes in my jeans with the other hand and my toes did a ragged Mexican wave. In my head, I was lying on the deck of HMS Victory with a piece of leather clamped between my teeth. The theatre staff asked me to try and keep still.

Then there came a sublime moment when the mask and the eye clamps came off. I half expected them to say, ‘You have a beautiful baby boy.’

Back to the waiting room, reeling, for a cup of tea and some after-care instructions. Luckily my daughter had paracetamol in the car and I have loads of hospital-strength painkillers at home. So I hit the co-codamol and spent the rest of the day rolled up in a ball on the sofa thinking about poor King Harold and his eye.

The next day, it was a different world. I was still in mild shock, but the pain was gone and my sight was restored, after two years of fog, to a wonderful level of sharp though still fractured 3D images, like to be lit entirely by halogen bulbs.

It was a miracle for which I am hugely grateful, and yet I do have questions about the brutality of that procedure. Maybe I am a massive coward, or have been spoilt by the sensitivity – tenderness, even – that I have found everywhere in oncology, but how do thousands of elderly eye patients cope with the trauma, even with William Wordsworth’s help?

Do they just manage because for them there is no choice?

Costs, resources… I get it, of course, but couldn’t a mild sedative be offered, as it is with a colonoscopy or gastroscopy?

Acquaintances who scoff at my spinelessness admit, on further questioning, that they went privately and paid for treats such as anaesthesia.