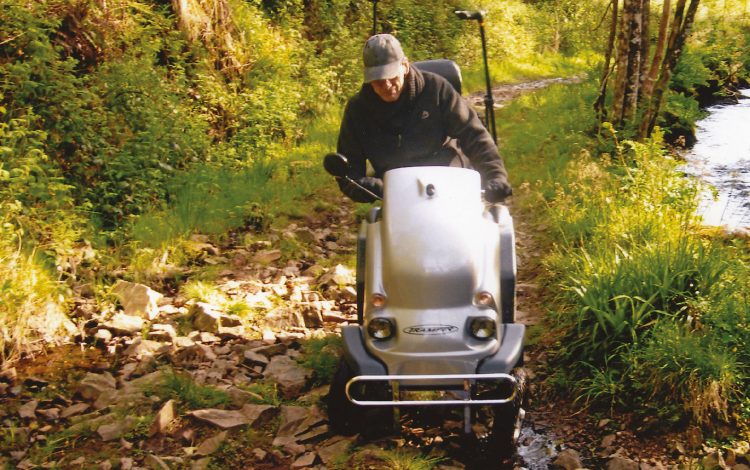 Tony Gould lost touch with the landscape of his childhood and his ancestors. Then, thanks to an off-road mobility scooter, he discovered its beauty all over again

Tony Gould lost touch with the landscape of his childhood and his ancestors. Then, thanks to an off-road mobility scooter, he discovered its beauty all over again

In my seventieth year I bought a Tramper – a mobility scooter with a difference, designed for off-road use. When I first saw a photo of this mini-tractor with larger wheels at the back than the front, I knew I must have one. I had grown up driving tractors on a Devon farm. Initially we’d had a vast yellow MM – Minneapolis-Moline – with cambered front wheels, which gave it a boss-eyed appearance. There is a photo of me at the wheel, aged seven or eight, my head barely visible above the rear mudguard. Then came a chunky red Nuffield and a spidery orange Allis-Chalmers. The Tramper, it seemed, could cross a ploughed field even if it couldn’t do the ploughing.

I had a trial run with one before I took the plunge and parted with the five grand or so it cost. A sales rep called John unloaded the machine from his small van in our driveway and asked where I wanted to go. I pointed to the mound of Trendlebere and Black Hill rising out of the valley below and said, ‘How about up there on Dartmoor?’ I thought he’d demur, but he nodded and said, ‘Let’s go.’ Once I’d familiarised myself with the controls, we were off, John walking behind me as we went down the narrow road into the valley before turning into Pullabrook Wood. The Tramper made light of the increasingly steep ascent on the stony track through the wood to open moorland, where we followed what remained of a once metalled lane (marked ‘Unsuitable for motor vehicles’) to the junction with the Bovey Tracey-to-Manaton road. Less than 100 yards farther on, we pulled into a layby overlooking the Bovey Valley. John, who was not a young man, was puffing a bit and I suggested we turned back.

We did – but I could barely contain my exhilaration. This silent, twin-battery-powered machine was going to revolutionise my life, opening up countryside that had been inaccessible to me for half a century. The whole of the East Dartmoor National Nature Reserve, including lovely Yarner Wood, was on my doorstep and I spent the next five years exploring it, observing pied flycatchers in the spring, picking bilberries – locally known as whortleberries – in the autumn, trying unsuccessfully to learn (or recall) the names of wild flowers and butterflies, sometimes surprising a deer on one of the many paths criss-crossing the wood, or on open moorland spotting a stonechat and once – joy of joys – a yellowhammer, a bird whose song, ‘a little bit of bread and no cheese’, I’d learnt as a child.

With help from the Dartmoor National Park’s rangers, who would transport my Tramper, I was able to explore the moor farther afield,       helping to map and test accessible routes. Several times I traversed the highest section of the defunct Princetown Railway – which once carried granite blocks quarried there down to Plymouth docks – and watched ravens soar above the high tors. And as a member of Disabled Ramblers I made assaults on the heights of Haytor and the rock-strewn Hound Tor, along with other intrepid Tramper users. 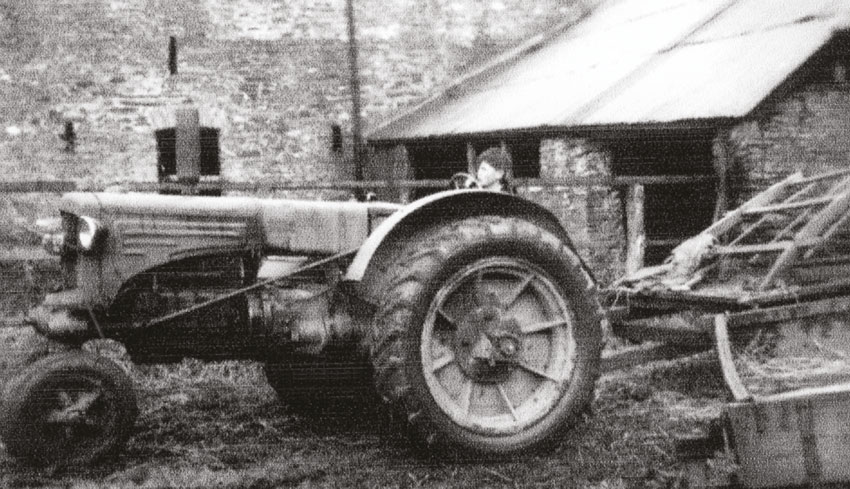 Devon had been home to my family, whose origins were in Staverton, near the town of Totnes, for generations. During the English Civil War James Gould, a merchant and ardent supporter of the king, was mayor of Royalist Exeter, while his nephew William Gould, colonel of horse in command of Cromwell’s force, was governor of Parliamentarian Plymouth  – a striking example of the way the war divided families. My Gould great-grandfather, who died in Exeter’s Wonford lunatic asylum, was vicar of Stokeinteignhead for many years and lived latterly at Knowle, a house bought by his father in the 1820s, just up the road from where I was living in Lustleigh. My father and his brother (who had married sisters) both settled in Lustleigh when they returned from the teak forests of northern Siam shortly before the Second World War, and I was born in nearby Bovey Tracey. My father bought a parcel of land from my uncle, on which he built the house where my brother now lives. At the end of the war I used to go – on my own – to Miss Bodkin’s kindergarten in Bovey on the pretty Newton Abbot-to-Moretonhampstead branch line, later axed by Beeching to leave several sturdy bridges and viaducts as memorials to a more confident age when things were built to last. I would get on the train at Hawkmoor Halt and alight in a cutting at Brimley Halt, where adders basked in the sun in high summer.

Yet, as an adolescent living on the remote farm in the South Hams to which we moved after the war, I could not wait to get away. I felt stifled and longed for a more adventurous life, which in my case National Service provided: called up at eighteen, I was commissioned into the 1/7th Gurkha Rifles and posted to the Far East. During the next year-and-a-half I waded through leech-infested swamps in the Malayan jungle, trekked through the Himalayan foothills of east Nepal, stayed on a tea estate in Darjeeling with a view to becoming a planter, and ended up noting missing light bulbs and cracked washbasins in Tan Mei camp in Hong Kong as acting quartermaster. As our battalion second-in-command wrote to my father, ‘Tony has managed to fit more travelling into a short space of time than any other officer.’ But then that outdoor life – almost any kind of life – came to an end. I contracted polio and found myself encased in an iron lung. Six weeks later I was flown back to England, where I spent the next year in a military hospital and a rehabilitation centre.

By the time I returned to the farm in Devon I was able to walk short distances with a stick and a caliper on my right leg and could drive an adapted car. Unable to do farm work and unwilling to become a cog in a Remploy factory, I seized the opportunity to pick up the threads of an education abandoned at sixteen. Apart from family life, there was nothing to keep me in Devon. London was the magnet and, after completing an English degree at Cambridge, that was where I settled, finding work as a BBC radio talks producer and, later, as books editor of New Society.

Devon came back into my life when we decided to leave London. Jenny, my second wife, found a job in Exeter and we bought a house in Lustleigh, two miles from where I was born. We liked its name – Covering End – and hoped it would cover ours. But despite my roots, it was only after I acquired my Tramper, 24 years later, that I felt I belonged there. The Tramper gave me an entrée into the local rural community. I got to know the rangers in the national park, with whom I worked as a volunteer to improve disabled access on the moor and in Yarner Wood. Normally I am not much of a joiner but now I wanted to give something back and to share my feeling of liberation, the uplift – no other word will do – I experienced in being out on my own in a challenging terrain. 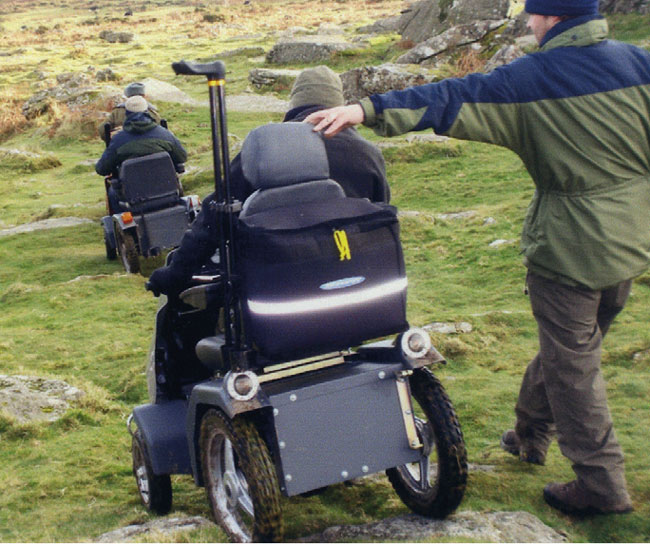 Risks were an important part of the challenge. Could I get up that steep slope, or negotiate a particularly dodgy camber without turning over the Tramper? I did have accidents, and one that might have been fatal, when I crashed into the side of an ancient quarry and was thrown head over heels a yard or two downhill from the stalled but undamaged machine. To my amazement, I was OK; even the glasses hanging round my neck were intact. I was lucky then. But some months later I fell at home at the kitchen sink and damaged my knee so badly I couldn’t stand or walk for six weeks. Soon after, Jenny was told she had Parkinson’s disease. We knew then that our days at Covering End were numbered.

We sold the house three years ago and moved to a retirement village in Maidstone, to be closer to our son in London. Our new home is a flat in an imposing old mansion that overlooks a large park. I go out on my Tramper and occasionally find a new route; but, fine and spacious though the park is, it isn’t Dartmoor. Our final years at Covering End – the Tramper years – had reanimated a dormant love of my ancestral home county, and in particular the wilderness at the heart of it that is Dartmoor. In retrospect, I think of this time as a kind of Indian summer.

Locked down with my daughter - Anne Robinson

Petula Clark, the Oldie of the Year 2020! By Gyles Brandreth