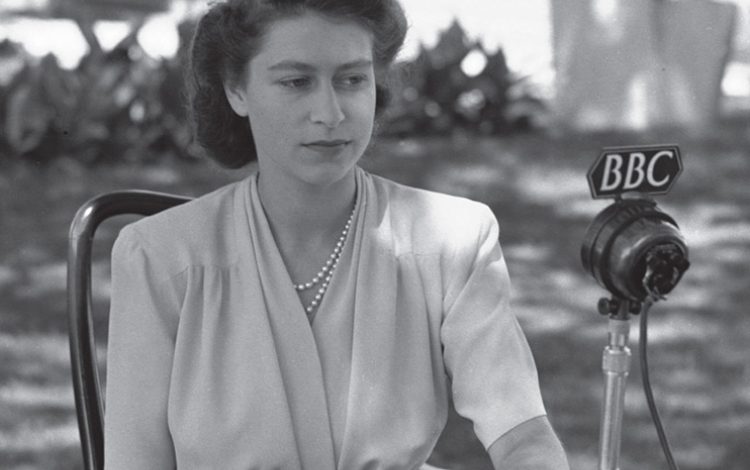 Seventy years ago, the Queen made her most famous broadcast, to mark her 21st birthday. Charles Utley reveals how it came to be written 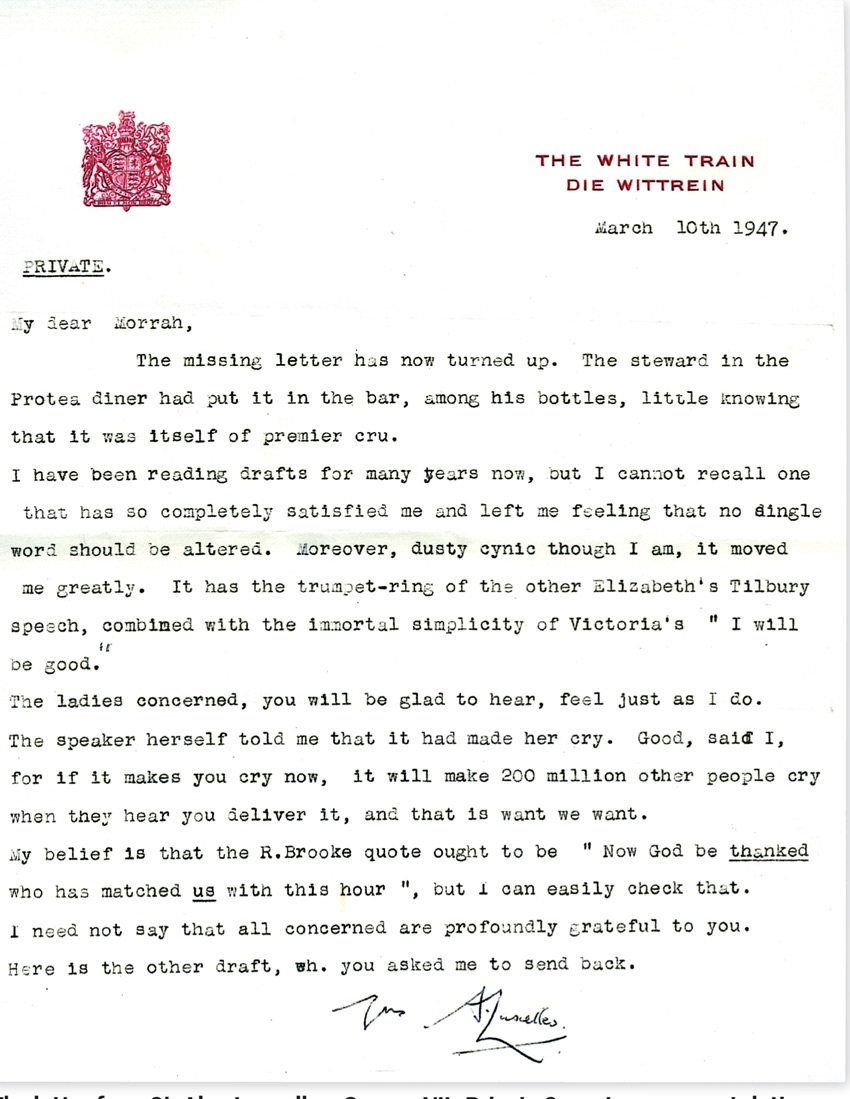 The name of our current royal house changed from Saxe-Coburg-Gotha to Windsor on 17th July 1917, 100 years ago on Friday. We have had four Windsor monarchs but only one of them, the present Queen, was born with that name.

It was thirty years after the change, seventy years ago – on 21st April 1947, her 21st birthday – that Princess Elizabeth made the most famous speech to be made by any Windsor. And, I dare to suggest, it ranks, in fame, with the first Elizabeth’s speech in Tilbury and well above that of Mary I in the Guildhall in 1554.

What is there left to say about one of the most frequently quoted speeches of the 20th century? The answer is that it was written by a fifty-year-old journalist. His name was Dermot Morrah. And he was my grandfather.

The most quoted passage says: ‘I declare before you all that my whole life, whether it be long or short, shall be devoted to your service and the service of our great imperial family to which we all belong.’

I have always thought my grandfather’s genius in writing the speech lay in his ability to put into words what the speaker herself genuinely thought. Her declaration that her whole life would be devoted to our service rang true in 1947, and rings even truer in 2017, because she really meant it. Had those words been put into the mouths of others, they could easily have sounded false. But there was nothing remotely false about them when she said them.

My family still has the letter, headed ‘The White Train’ – the ivory-painted, air-conditioned saloons ordered for the Royal Family’s three-month tour of South Africa. The letter is from the King’s Private Secretary, Sir Alan Lascelles, thanking my grandfather for the speech.

As the letter says, the speech made the Princess cry. I am reliably informed that Winston Churchill was also reduced to tears when he heard it. How proud my grandfather must have been. But he never uttered a word in public admitting to having been the author.

That most famous passage about service came straight from my grandfather’s pen. But I was interested, in looking back at what he had written about the speech later, to see that he didn’t refer to that passage. In his 1958 book on the monarch, The Work of the Queen, he singled out a quotation he had used in the speech. It was from Rupert Brooke, reading, ‘Now God be thanked, who has matched us with His hour.’ Posterity, I suspect, will give the real accolade to the Princess’s declaration of service rather than Brooke’s quotation. I suspect my grandfather was well aware of that, but modesty prevailed.

Who was Dermot Morrah? How was it that he was charged with writing the speech which would come to define the longest reign of any British monarch?

Yes, he was a journalist. But he was a little more than that. He was born in 1896. His devotion to the Royal Family began at an early age. His first memory was of sobbing, at the age of four, on being told of the death of Queen Victoria. Just before the start of the Great War, he went up to Oxford. But he stayed only a year before enlisting and going over to France. Fortunately, he acquired a Blighty wound. He returned to Oxford. Fearing he might not get a First if he resumed his study of mathematics, he changed to modern history. He duly got his First. He became a Prize Fellow of All Souls, where he shared rooms with T E Lawrence. 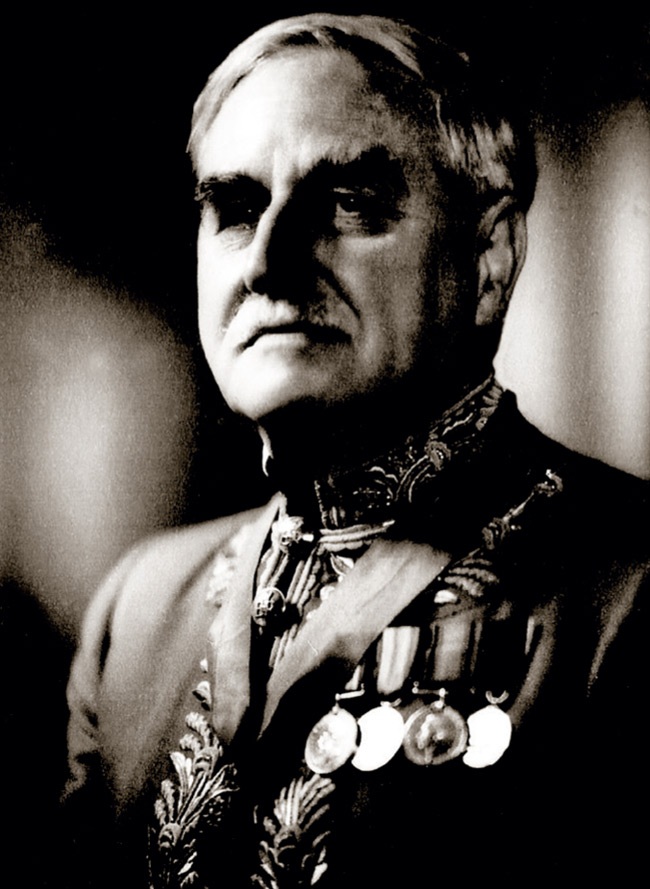 All dressed up: Dermot Morrah in his Arundel Herald Extraordinary uniform, with his First World War medals

Then love intervened. He met my grandmother. He courted her under the watchful eye of a nun who acted as chaperone. They married.

Prize Fellows of All Souls had to be single. My grandfather had to go out into the world and get a job. He decided on journalism. He was taken on by the Daily Mail. After a few years, he was invited by the editor of the Times to edit the history of the newspaper and to write occasional leaders. His particular subject was the constitution and the monarchy.

He was a courtier; he was appointed Arundel Herald Extraordinary before the Coronation (which gave him the best seat in the Abbey of any journalist). He adored dressing up in the playing card outfits heralds wear.

He was wonderfully lazy. There is an anecdote, told by another leader writer at the paper, who had been put into my grandfather’s office. After a few months, the newcomer plucked up the courage to ask Morrah why it was that he came into work at 11am, did the Times crossword in about eight minutes and then left. ‘The editor knows I am here between eleven and ten past,’ Morrah said. ‘If he needs my services, he will tell me.’

The Second World War came. About a year or two into it, the King’s courtiers, and the King himself, felt that his stutter was under control and that he could now make rather more complicated speeches. A new speechwriter was needed. I am told it was the King who said, ‘What about that chap on the Times?’ The chap was my grandfather. So began his royal speech-writing career.

In 1947, the King, the Queen and the two princesses undertook a tour of Southern Africa. My grandfather was sent by the Times to report on it. The King and his heir presumptive realised that something ought to be done about her 21st birthday. She would make a broadcast speech to the Commonwealth. But who was to write it? That ‘chap on the Times’ was there. Give the job to him. And there you have it.