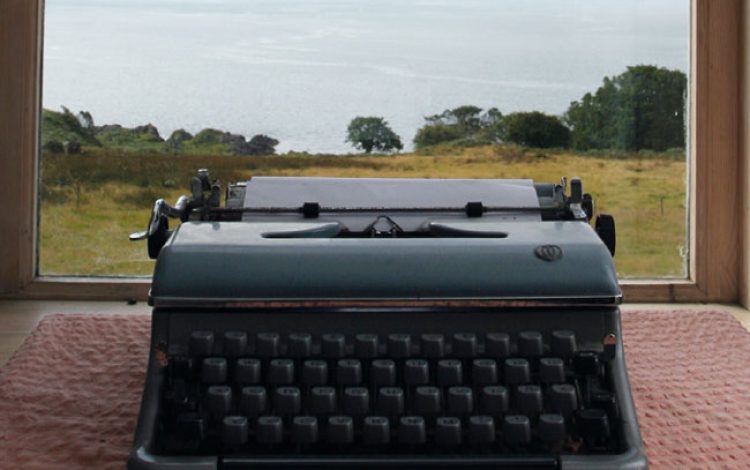 The view from Orwell's desk
View Full Size
1
of 1

The bed and breakfast lady on Islay had seen my type before. A writer on pilgrimage to George Orwell’s last home, Barnhill, on Jura. There are no direct ferries to the island and the only route is via its much more populous neighbour, Islay. Like any pilgrimage route worth its while, the journey is arduous: first a few hours on the road from Glasgow round Loch Fyne down to the port, then a two-hour ferry over to Islay, followed by a second ferry of twenty minutes to Jura and finally the tortuous single-track road for 25-odd miles along the island to an unprepossessing layby in the middle of a moor. Here, the sign to would-be pilgrims is politely fierce: those wishing to visit Barnhill must walk the last four miles.

It’s a round-trip of eight miles across a starkly bleak windswept moor to the house where George Orwell lived for the last few years of his life, and famously where he wrote Nineteen Eighty-Four. There are more signs towards the end of the track, requesting pilgrims to respect the privacy of those renting the house; all you get is the view looking down on Barnhill.

Despite all these deterrents, my Islay hostess sees a steady trickle of aficionados, writers and readers who admire the man for his clarity of thought and are intrigued by his quixotic decision to take himself off, already ill with TB, to such a remote place. She pointed to the large handsome chair I was sitting on to eat my cooked breakfast. It had belonged to Eric Blair (Orwell’s real name). They had lived near him on Jura, and after he died, his household was packed up and her family acquired his chairs. Breakfasts now came with an added appeal; I shared a chair with Orwell.

My pilgrimage was on a blazing sunny day in the summer of 2010. I was stunned by the empty grandeur of Jura. Like any good pilgrimage it inspired an ambition. I would travel the Hebridean archipelago as far as St Kilda, exploring its extraordinary landscapes and the compelling hold they have exerted on a motley company of saints and sinners, visionaries and charlatans. I would write a book.

Six years later, after all the travels and writing, it was fitting that I return to where I had begun on Jura. We rented a cottage a few miles from Barnhill and this time, our landlady kindly gave us a lift to the house and showed us round.

The house has probably not changed much since Orwell’s day. It has the timeless appeal of those well-worn Scottish holiday homes: faded chintz, some Victorian china, old prints, comfortable deep armchairs, board games and big iron stoves. Over the years it has accumulated the memorabilia of Orwell devotees: plenty of editions of Nineteen Eighty-Four, including a magnificent facsimile of the original typescript donated by an American guest.

An old typewriter sits in front of the upstairs dormer window where Orwell used to work. He had chosen to live in an ‘extremely ungettable-at-able’ place, as he put it, but he wanted visitors and would send detailed instructions on the journey to prospective guests. When they arrived however, he often left them to his sister Avril to entertain. One guest hoping for in-depth discussions about politics, complained that Orwell only wanted to talk about Atlantic terns.

On the day I visited, the view from Orwell’s desk was stunning, with a bright spring sunshine glittering on the water and the mountains of the mainland of Argyll and beyond a hazy blue. It was a striking contrast to the fetid, claustrophobic urban squalor depicted in Nineteen Eighty-Four.

Equally impressive were the cowsheds. This may seem insignificant, but in fact some of Orwell’s last letters from the sanatorium were preoccupied by the fate of his cows. He took his small holding experiment at Barnhill very seriously. The cow sheds – cobbled floor, spacious stalls and well built gutters – must have been a source of real satisfaction.

After Barnhill, we walked on to the northern edge of Jura. This area is quite unlike anywhere else on the austere island; here, the original oak woodland comes down to a shore of pebbled coves. A grassy track wound beside sparkling streams, and high overhead, sea eagles with wingspans the size of a barn door circled.

Like many who end up on islands in the Hebrides, Orwell’s arrival was a combination of history and happenstance. It was David Astor, Orwell’s editor at the Observer, who had encouraged his interest in Jura, which Astor knew because his plutocrat family owned a sporting estate on the island, purchased in the days when every self-respecting Victorian businessman needed a summer home in the Highlands. But by the mid-20th century, remote islands had asserted a different appeal to artists and writers – as refuges from what they believed was a collapsing civilisation.

Perhaps a recurrence of that sentiment partly inspires today’s pilgrims: that from the detached vantage point of a remote island it is possible to see more clearly the unfolding of history. That was the case for Orwell, but it has its own dangers; D H Lawrence lampooned the temptation in his short story ‘The Man who Loved Islands’, in which a man attempts to build his own separate world on an island and ends up marooned alone, mad, on a rock. These days, that same longing and destiny can appear uncomfortably familiar.

Love of Country: A Hebridean Journey by Madeleine Bunting is published in October by Granta, price £18.99.

The Two Ronnies: what a fine pair! - Madeline Smith