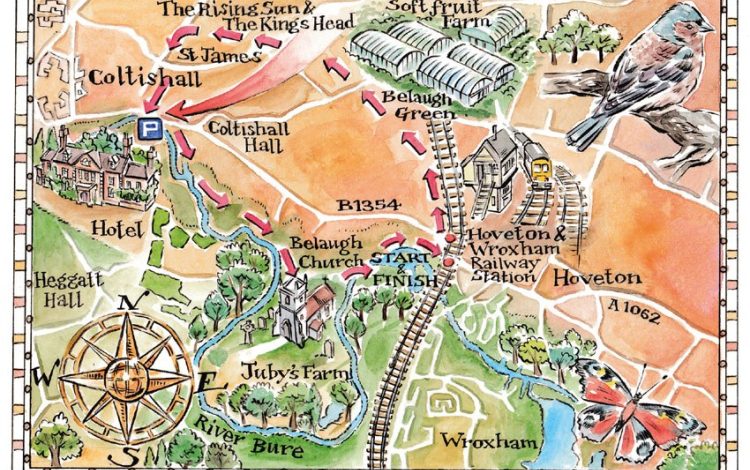 'Who let the dogs out?' asks Patrick Barkham

On the bright side, the humble walk has become almost the only legal activity permitted in public, apart from food-shopping. A daily stroll is a Government-approved, NHS-backed undertaking, providing you maintain a strict two-metre exclusion bubble around yourself. Life on lockdown means probably more humans walking in Britain than at any point in history.

To take the spring from your step, however, if you are deemed to have driven too far to claim your walking ration, you risk being filmed by police drone, fined by officious constables and shamed by social media. And woe betide you if you pause for a rest or to admire the sunset.

Writing this down still feels like a poor attempt at a post-apocalyptic novel, but of course it is a new reality to which we have adapted with startling equanimity.

I had to cancel various far-flung British walks for fear of being arrested by the ‘non-essential’ police. So this is my local lockdown walk, which is currently an option if you are not self-isolating and live close to Wroxham in the Norfolk Broads.

I first noticed walking etiquette was changing when I jogged through the car park of the Bure Valley Railway, a narrow-gauge steam railway which shares the old railway track to Aylsham with an excellent public footpath. A pair of passing walkers jumped away from me as if I were a wolf.

I used to encounter three dog-walkers on this five-mile round. In lockdown, there are twice as many. There may be conflict between walkers and space-hogging, droplet-spreading joggers in overcrowded urban parks, but in the countryside there is still plenty of space. And, if anything, greetings between walkers are cheerier than before.

The old railway line is a ribbon of young oak woodland, a sunlit tunnel for peacock butterflies, chaffinches and buzzards. It hummed with spring. On either side was intensively farmed, high-grade agricultural land. Beyond the first level-crossing were fields of polytunnels, part of an enormous soft-fruit operation, which will this summer need British seasonal workers for the first time in decades to keep us in strawberries and cherries.

At the third bridge, I took the steps down the embankment to head south on a country lane through the hamlet of St James. Where the lane turned sharp left, I continued ahead on a footpath which squeezed between hedgerows and gardens and popped out opposite Coltishall’s twin riverside pubs, the Kings Head and the Rising Sun.

Once a perfect half-way refuelling point, the pubs were, of course, closed. I turned left and crossed the green beside the River Bure, which was as tranquil as ever, framed by reedbeds and water meadows. Several older couples hunched furtively in their parked cars, admiring the view.

I followed the lane east past a row of fine riverside houses and on to the footpath to Belaugh. This is the most beautiful stretch of the walk, cocooned in the valley bottom, crossing green pasture bordered by handsome two-century-old oaks. A pair of kestrels nest nearby; they regularly dash from these trees. I spied them mating in a nearby garden this spring.

To the south were reedbeds, alders and the twisting river, with blue-green woods on the rise beyond. The footpath emerged in the gorgeous little riverside village of Belaugh, with tiny boatsheds, a surprisingly steep river-cliff and a scenic church.

I followed the lane climbing out of Belaugh and crossed the busy Coltishall-Wroxham road to follow a permissive path – of the grudging, rutted sort – on the field edge. Crossing five almost identically sized fields, I reached the railway again and the bright lights of Wroxham. When all this is over, please visit and take a walk.

All of Britain’s cafés, restaurants, pubs and holiday accommodation will be extremely thankful to see you.

This walk starts and ends at Hoveton & Wroxham railway station, which is 15 minutes on hourly trains from Norwich station. OS Map OL40, The Broads