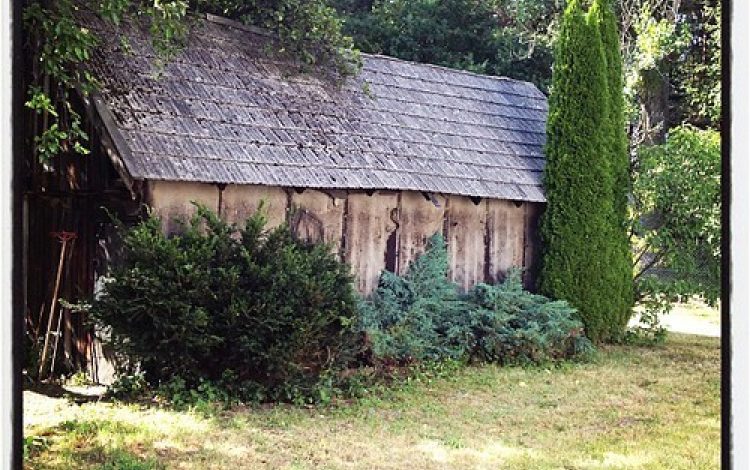 "Świerczyniec" by Jeena Paradies is licensed under CC BY 2.0
View Full Size
1
of 1

I wonder quite regularly these days whether I am completely potty, partly potty or one of the few relatively sane people in the world.

When my former wife and I sold our home (now worth £3m) in Richmond in 1988, I moved into a smart South Kensington flat. In 1994, I took up residence in a stately home with 50 acres of landscaped gardens, along with about 20 other members of the Brahma Kumaris, an Indian spiritual movement I’d joined in the 1980s.

Now, aged 75, I’m living in a wooden shack in Oxfordshire, quite alone. A former chicken house, it can be accessed only by a mile-long dirt track which even dustmen refuse to negotiate.

Despite these reduced circumstances, I have tasted a sense of freedom in the simplicity of my new life, very much as described by Catrina Davies in her new book, Homesick: Why I Live in a Shed.

It’s a big change for me from the stately home, which served as a retreat centre hosting thousands of guests a year until it was forced to close by a deteriorating plumbing system, now undergoing renewal.

Living in a community is demanding – as in fact is the entire spiritual journey. We pooled our resources to buy the lease on the big house, and I was invited to move there when it opened in the mid-1990s.

At first I found a huge sense of relief at being among men and women sharing the time-honoured ‘road less travelled’. I also enjoyed being part of a team doing our best to ensure a peaceful and enlightening experience for our guests.

Soon, however, I learned first-hand about the trials and tribulations of The Pilgrim’s Progress. Bunyan’s hero, in his efforts to escape the City of Destruction, has to pass through the Slough of Despond, the Valley of Humiliation, Vanity Fair, Doubting Castle and the Enchanted Ground – I know them all. And still the Celestial City is an elusive goal.

But here at The Shack, there is no one to rebuke me if my shirt is creased or my trousers dirty. No one to decide what I should eat, or when. No one to miss me at early-morning meditation (although I do regularly join some of the sisters now living in a rented bungalow, half an hour’s walk through woodland). No rage to be suppressed over the hurts, real or imagined, arising in a community of people from very varied backgrounds.

I enjoy a kind of monkish one-upmanship in telling my friends I live in a hut.

It’s unfair that people are more accepting of men living in sheds than of women doing so. During the post-war years, shed sales soared as returning servicemen retreated to the bottom of their gardens to escape their wives. With home lives no longer recognisable after six years of separation, they sought solitary refuge and comfort.

Even today, when a man lives in a shed, he’s thought by many to be in man-cave heaven; when a woman does, it’s a sign of failure.

All credit to Catrina Davies, therefore, for coming up smiling from her own shed experience – especially as it’s much tougher than mine.

A caste system operates in the world of sheds, huts and shacks. My new home is at the upper end of this hierarchy. It is actually named The Shack; even among connoisseurs of the genre, it would be considered luxurious.

A large, wooden structure divided into sections, it has a washing machine and fridge, a separate bathroom and shower room, two tiny bedrooms and an L-shaped living area with a simple kitchen. The pine of the floor, beams and worktop lends a warm, rural feel.

It borders on fields and woods in all directions, standing in the grounds of an isolated (but rather grand) cottage deep in the countryside.

It is vastly more congenial than Davies’s 18ft-by-6ft corrugated-iron refuge in Cornwall. Although her interior looks rather like mine, she has no hot water or electricity. Also, she is vulnerable: marooned on a crossroads, the shed suffered a break-in, in which most of her possessions were stolen; an out-of-control car transporter smashed into it – fortunately while she was out.

My grounds for hoping I am still on the right track lie in the feeling that, despite my relative isolation, the move has brought me closer both to my friends in the spiritual movement and to my family (I have two sons – one is Tom Hodgkinson, The Oldie’s Town Mouse).

My family have been visiting more regularly than when I was in the rather austere environment of the retreat centre. I felt encouraged when Henry, one of my grandsons, asked, ‘Grandpa Nev, are you enlightened?’

‘No,’ I replied. ‘But there is a lot more light in my life than there used to be.’

It’s now nearly 40 years since I began practising an utterly contrarian way of thinking. It’s been a puzzle to most of my family and friends, but I find that my spiritual study and associated meditation practice help me survive in a difficult and distressing world.

Letter to a dying friend from Roger Mortimer - Charlie Mortimer

God save the Queen!