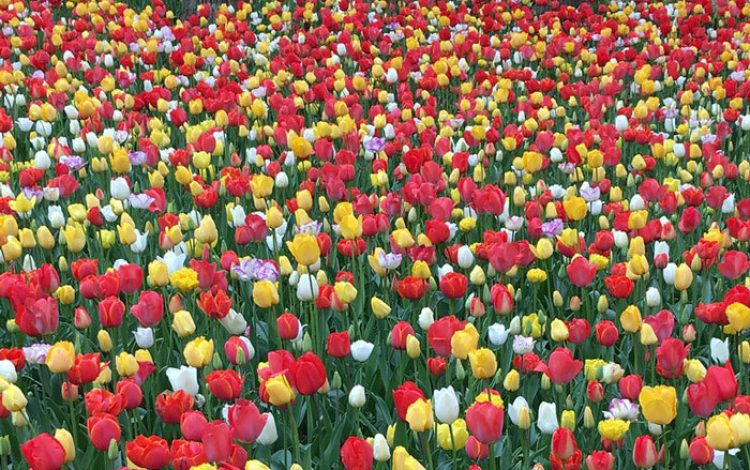 David Wheeler on the endless appeal of tulips

Bring on the tulips.

‘Buried deep in the make-up of the flamboyant, cultivated tulips that fill flower shops in spring must be the ghostly genes of their wild cousins.’

Thus wrote Anna Pavord, whetting our appetites for a small, brown, onion-like bulb – maker and breaker of long-ago fortunes – in her convoluted, occasionally mysterious, sometimes reckless, wholly engaging saga, the 1999 classic The Tulip. Only roses have a more colourful and, yes, more fragrant story to tell.

So fond of tulips am I that in 1987 when I launched the gardening quarterly Hortus, I chose them as my company logo. Just before she died in 2010, I asked eminent wood-engraver Yvonne Skargon to revamp the image (pictured). The last engraving she made, it’s crowned the contents page of every issue since.

Tulips enthral gardeners. Easily cultivated, they come in an assortment of colours, from the chalkiest white to near- black. Some bear beguiling stripes and featherings (thanks to an otherwise benign virus) seldom seen in other plants.

Moreover, their numerous species and varieties – wild and cultivated – please us with a flowering season that lasts from mid- February to late May. Some flaunt their beauty a mere three or four inches above ground; others stand up to two feet tall.

Plant the bulbs deep: the tallest can cope with a depth of ten inches, which will also enhance their longevity, guaranteeing annual extravaganzas for years to come.

Forget what you’ve learned from that song: tulips did not originate in Amsterdam, although it remains a major trading post and they’re grown throughout the city and widely across the Netherlands.

Where, then, did these wild darlings, holders of those ‘ghostly genes’, so cleverly ‘improved’ (depending on your point of view), come from?

Their homelands stretch from eastern Mediterranean islands across Turkey and through semi-desert and steppe locations from the Caucasus in the north to Kurdistan. They were the small, profitable cargo of countless forgotten Silk Road carpetbaggers and latter-day botanists.

My many April visits to Istanbul have coincided with its Tulip Festival, a prolific blossoming in parks, on roadsides and traffic islands and just about any place where a fistful of bulbs can be dug in.

Sixteenth- and 17th-century Iznik ceramicists adopted the pointy-petalled Tulipa acuminate. And so they brought mosque and palace interiors to floriferous life. The tulip’s stylised representation is still seen everywhere on walls, billboards and municipal publications. Symbolically, the tulip is to Istanbul what bamboo and pandas are to China.

At home, I grow some of the diminutive species in pots to bring into the house when they’re flowering. In the garden, we plant taller, cultivated, modern varieties in colours that catch our eyes when those seductive bulb catalogues hit the doormat every autumn.

My liking for wild species embraces almost any I can get my hands on: tall, guardsman-red Tulipa sprengeri from Turkey’s Pontic coast (which better gardeners than I manage to raise and naturalise from seed), mid-height yellow-and-white T tarda and multi-headed star-like T turkestanica, whose name boldly proclaims its motherland.

Finally, a confession: I buy bunches of tulips from supermarkets – before the season begins. These acts of anticipation prepare me for the embryonic flowers readying themselves below ground; flowers certain to gladden the heart and cheer our Easter garden visitors.