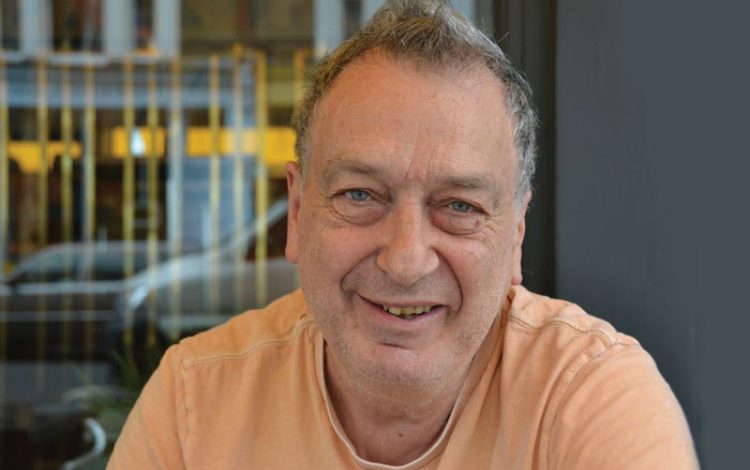 With hits including My Beautiful Laundrette, Dangerous Liaisons and Philomena, Stephen Frears is one of our most versatile directors. He talks to Melanie McFadyean about his Leicester childhood and his journey to the top

Stephen Frears makes an art form of looking as if he doesn’t fit in and couldn’t care less. He looks like a raddled, handsome French or Italian roué who has been up all night. His is the worse-for-wear look, and it suits him. Yet despite his refusal to play the part of smart top film director, I suspect he fits in whenever and wherever he wants to.

As you might expect, the cinema played a big part in his childhood. There was nothing to do in wartime Leicester so his mother took him to the pictures – there were forty cinemas in the town then. ‘I remember having to be taken out of Pinocchio because it was too frightening – I must have been three. She would also take me to slightly unsuitable films. There wasn’t much sex and violence in those days, but I remember seeing Anthony Asquith’s The Way to the Stars, written by Terence Rattigan. It’s about sex – quite innocent sex – and love and death getting mixed up with other bits of life, in this case the RAF during the war. As a child, alone with my mother, I must have found this picture of adulthood heady and glamorous. More interesting than my childhood. One rather seedy cinema, the Floral Hall, was next door to the circus – you could hear the elephants trumpeting during films. Then when I went to boarding school [Gresham’s], they showed two films every weekend.’

I asked Frears about being alone with his mother, his older brothers having been sent to school and his father away at the war. His mother comes up in conversation quite often. She was a hysteric, he says, a Mrs Thatcher. He is unfair to her, and of course she loved him very much, maybe too much, he says. Curiously, his mother never told him she was Jewish – he found out when he married Mary-Kay Wilmers, his first wife. At his grandmother’s ninetieth birthday, she said she was glad he had married a Jewish woman and the story came out. Frears isn’t sure what impact this revelation has had, except possibly, he says, ‘it might make sense of some notion of not fitting in.’

After Frears’s father returned from the war the family moved to Nottingham. His father trained as a doctor, while his mother worked as an almoner, a hospital social worker, he explains, adding that she often took him to the YWCA where he played with the women in the kitchen.

When Frears left home he went to Cambridge to study law. He found the world beyond the family confines intimidating; other students seemed so rich and clever.

Law bored him. If Frears is frightened of anything it is boredom. He’s not a man who will retire. ‘If I stopped working I’d die. The idea, as it were, of playing golf is horrific. I don’t like having nothing to do, I’m hopeless at that. When you find a film you want to make, you think, oh good I’m going to be thinking about this for the next year, how interesting, so everything becomes purposeful.’

Maybe that fear of boredom is what stops him repeating himself. The films are strikingly different, comic, light, dark, political, turning their gaze on subjects as different as modern Britain’s ill treatment of immigrants (Dirty Pretty Things) to the jokey rendition of love, sex and writer’s ego in Posy Simmonds’s Tamara Drewe. My Beautiful Laundrette, The Grifters, Gumshoe, Mrs Henderson Presents, Dangerous Liaisons, The Queen, Muhammad Ali’s Greatest Fight – all so different.

His latest film, Philomena, a tragic story in which he takes on some of the greatest cruelties perpetrated by the Catholic church, is shot through with humour. It’s based on the book by Martin Sixsmith about Philomena Lee, a girl who becomes pregnant in 1950s rural Ireland, endures terrible cruelty at the hands of the nuns with whom, in disgrace, she is left to have her baby, and sees him taken away three years later. Co-written by Steve Coogan (who plays Martin Sixsmith) and Jeff Pope, Philomena has received rave reviews and has won several awards, including best screenplay at the 2013 Venice Film Festival.

Judi Dench, who plays the title part, is brilliant, as ever, and beautiful. There is no attempt to disguise her age. When I asked him what it is he likes about older actresses, with whom he often works, he replied: ‘Speak to my mother’ and ‘I don’t know, ask an analyst. In China they said you only make films about old women.’ Most directors are interested in younger women but he is at ease with his own generation. ‘You could be one of those horrible Hollywood sleazes who ogles 25-year-olds in short skirts,’ I say. ‘Sounds like heaven,’ he replies. ‘It’s probably what I’ve always wanted to be and failed miserably.’

When we met Frears had just finished Philomena. I asked him if he was pleased with it.

Frears’s career began when he met director Lindsay Anderson by whom, he says, he was ‘absolutely gobsmacked’. He went to work with him at the Royal Court in his mid-twenties, and while there he met Karel Reisz, who invited him to work on the set of Morgan: A Suitable Case for Treatment. ‘I’d never been on a film set before. I was a pupil to Karel, an apprentice. From Karel I was passed on to Albert Finney to work with him on Charlie Bubbles. Albert had to be taught how to direct a film and I sat in on the lessons. Then I worked for Albert’s company Memorial Enterprises and I made The Burning, a short story about apartheid, filmed in Tangier. It was such a good story and had very good actors. It ended up as a B-feature with Truffaut’s The Bride Wore Black. I was thrilled.’

Meeting Reisz offered new dimensions to life: ‘When I met Karel it was as though I started again. As though until then I hadn’t made a very good job of it. It was like being taught how to live. His life was glamorous in the ordinary sense and also intellectually. There was always something very interesting going on round the table – it wasn’t like that when I was a child. I was invited into this very interesting world which was Jewish and intellectual and glamorous and really good fun, and Karel was the most wonderful man, very humane. I saw him the day he died. I couldn’t have used the word love before I met Karel, I wasn’t brought up to love people, a ridiculous idea.’

Frears has thousands of friends. But he says he hasn’t always. ‘For a long time I scarcely had friends. Perhaps because I wasn’t very nice. You’re so crippled by ambition, jealousy and stupidity. It’s humiliating to think about it.’

It was in part the success of My Beautiful Laundrette, written by Hanif Kureishi, starring Daniel Day-Lewis, which changed him. He accepted who he was, saying self-deprecatingly, ‘I realised I was a middle-aged man with four children.’

And what of these later middle years? Anything to be said for them? Wisdom etc? ‘It’s vile. You ache and sleep badly. I go to Pilates in a desperate attempt to stay alive. Your children drive you mad. I have four children [two from his first marriage to Mary-Kay Wilmers, editor of the LRB, and two with Anne Rothenstein, a wonderful painter whom he has been with for forty years] and two grandchildren in Brooklyn aged two and six months. If you are a congenital worrier you worry about them.’

Frears, the congenital worrier – not that you’d know it – has been in therapy for many years and, while being open, has a way of deflecting anything too probing.

‘What does that mean?’ he replies, a shade testily.

‘Do you go into the cupboards in your head and dwell on every little thing?’

‘I have a psychotherapist who does that for me.’ He chuckles, thinks for a moment.

‘The whole thing has come as a big surprise.’

‘My life being so interesting. I’m