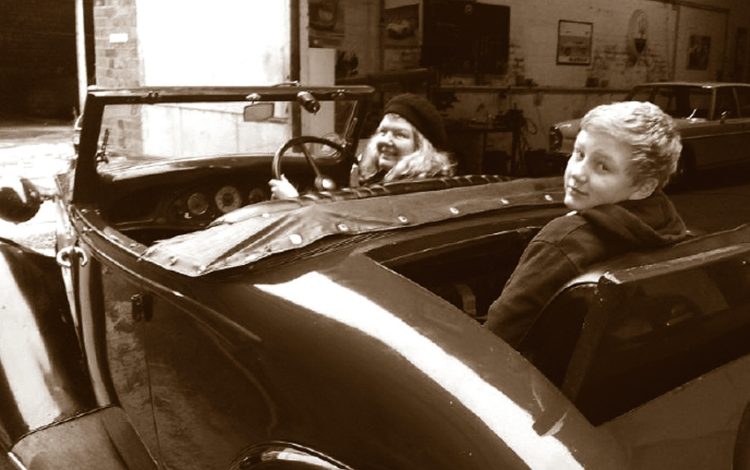 When my father was demobilised in 1946, the first car he bought was a pre-war Renault coupé with left-hand drive and a dickey seat. This was a well- upholstered seat that folded out from the back, where the boot would usually be.

The potential downside was that it was open to the elements; the upside that it was isolated from the two front seats. My sister, aged ten, and I, aged eight, loved the excitement of clambering in and travelling with the wind in our faces – a thrill that would certainly transgress today’s health and safety rules, given that seatbelts were then no more than a glint in the eye of a future transport minister.

We relished the sense of freedom and independence, of being out of range of parental admonitions. Mum and Dad were happy, too, enjoying the luxury of sitting quietly in the front, sealed off from our squabbles and queries about whether we were nearly there yet. They didn’t seem to worry that we might fall out.

Dickey seats in early motor cars – sometimes called ‘mother-in-law seats’ – were inherited from horse-drawn carriages, where they were customarily occupied by servants or by guards on mail coaches. Originally they were called simply ‘dickeys’; the Oxford English Dictionary traces the first use of the term back to 1801. The earliest cars were essentially motorised carriages, many of them custom-built. In 1912, the magazine Motor Manual advised, on most two-seaters, ‘A dickey seat can be arranged for if specially desired.’

As the market for cars grew, makers introduced standardised bodies, some incorporating dickey seats. Most such models had just two seats in the enclosed front and a dickey for two in the rear. But some large ‘tourers’, made by the likes of Ford and Hudson, could take five passengers inside, plus two in the dickey.

The outdoor seats gradually fell out of favour from the 1930s, when car ownership was extending beyond petrol-headed enthusiasts to the public at large. Manufacturers calculated that, to appeal to that broader market, they would have to place as much emphasis on comfort as on performance; so all seating went under the roof. The last British car with a dickey was the Triumph Roadster, built from 1946 to 1949.

The dickey seat is a symbol of the years before motoring became a chore. For my parents’ generation, taking to the open road was a liberating adventure, unrestrained by speed limits or even driving tests. Inspired, perhaps, by Mr Toad, they relished driving as fast as their engines would allow, hair streaming behind them.

In an article in the Spectator in 2003, Paul Johnson reminisced about a romantic night when, as an Oxford undergraduate in the 1940s, he was a passenger in a scarlet MG belonging to two young dons, Tony Crosland and Raymond Carr: ‘I sat in the dickey, my arm around the slender waist of the ravishing Hilary, the girl we shared, and in front these two academic buccaneers, one to become foreign secretary, the other the august Warden of St Antony’s College. The driving itself, through a midnight Oxford then mercifully free of traffic, was an invigorating education in the hazards of life among the intelligentsia.’ Poop-poop!