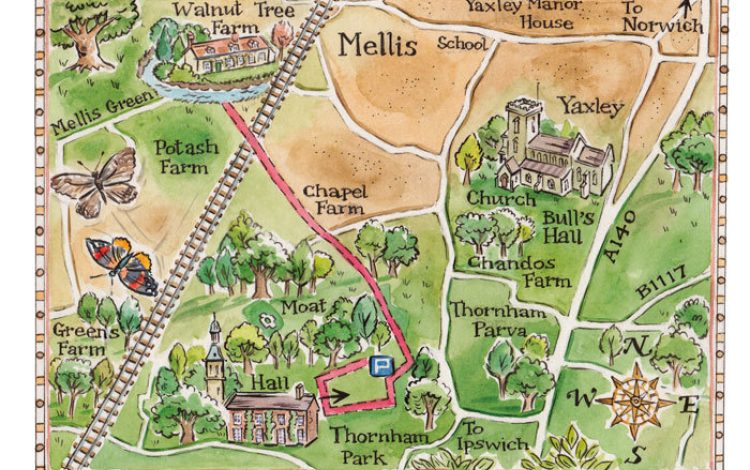 Cowpasture Lane in Suffolk is a delicious green tunnel in summer. Ash, oak, hazel and field maple rise on each side of a grassy track and meet overhead.

When I walked there one boiling midday, red admirals and speckled woods flitted through the dappled sunshine and the lane was as cool as an air-conditioned supermarket. When I strolled there one evening, imbibing the delicious scent of damp air sinking onto dry grass, bats took the butterflies’ place, darting against the darkening sky.

I came to Mellis, a small Suffolk village set round an extremely large common, to walk the home terrain of the writer Roger Deakin, best known for Waterlog. His aquatic jaunt round the British Isles changed the way many see the countryside – and helped set the tone for two decades of what’s now called nature writing.

Every enduring special place has been saved from a more mundane fate by someone, but I did not immediately realise that this beautiful stretch of Cowpasture Lane, a 900-year-old drovers’ way, owes its existence to the man who lived next door: Deakin.

Deakin, who died aged 63 in 2006, was a bohemian adman in the Swinging Sixties. Echoing many of his generation, in 1970 he lavished a couple of grand on a dilapidated farm to live closer to the land and practise self-sufficiency. He chose a long, low, timber-framed ruin built by a 16th-century yeoman farmer. Helped by his many friends, he rebuilt it from its 323 timbers upwards and named it Walnut Tree Farm.

I began this walk heading south-east on Cowpasture Lane beside the oasis of overgrown hedgerows that mark the 12 acres of Deakin’s former home. In January 1981, this tree-lined track was attacked by men with diggers and chainsaws. The local landowner had heard Deakin was seeking a Tree Preservation Order to preserve the lane. He preferred to clear its billowing hedges to prevent their harbouring unsavoury characters such as crop-devouring rabbits.

Deakin tried to persuade the men to stop. When that failed, he mobilised the media, and soon reporters’ notebooks and cameras bore witness to the lane’s destruction. After a legal battle reached the High Court, the lane was saved. With a panache that contemporary environmentalists would do well to imitate, Deakin sought to soothe both sides by describing the destruction as ‘only a temporary setback in the long life of Cowpasture Lane whose boundary hedges and trees have probably been coppiced at regular intervals since medieval times’.

He was correct. Today, ‘his’ section of the lane is a marvellous green tunnel, the 38-year-old coppiced hedges as enveloping and life-affirming as ever.

Cowpasture Lane once linked medieval livestock markets in Redgrave and Botesdale with the old Roman road that today thunders between Ipswich and Norwich; it was the railway line between these two cities that I first crossed.

Beyond, I entered a landscape bereft of Deakin’s positive vibes: vast fields of barley more typical of north Suffolk. This section was obliterated in the 1960s and a mean footpath traversed one prairie field before the lane reasserted itself, with dense thickets of elm and blackthorn.

Eventually, it wound into the enlightened grounds of Thornham Hall, where there was a maze of permissive paths through mature woodland and refreshments inside the hall’s splendidly refurbished Victorian walled garden.

Returning the way I’d come, I finished this walk with a dip in the moat beside Deakin’s former home – a glorious, head-cooling option available if you book a night in one of Deakin’s old writing huts via Airbnb. Afterwards, Walnut Tree Farm’s current owners, Jasmin and Titus Rowlandson, relayed the cheering news that the missing part of Cowpasture Lane could soon be reinstated, thanks to conservation grants and the goodwill of the landowner.