On the track of a good story 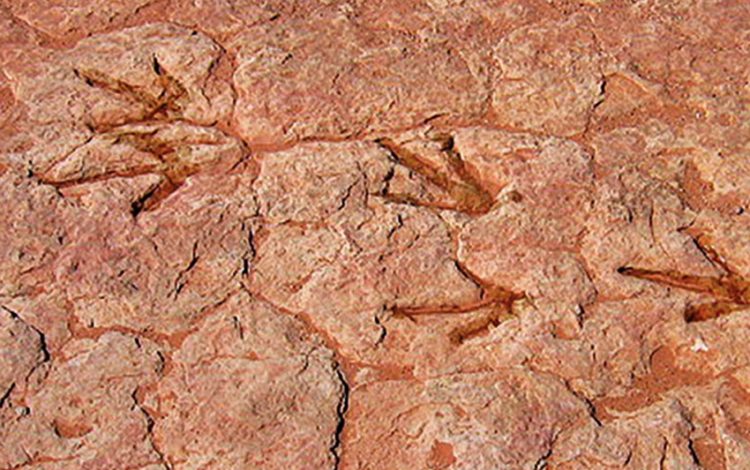 The distinctive tracks of Coelophysis
View Full Size
1
of 1

Autumn in New York, late 1950s, and my wife and I had been there long enough to call autumn the fall. Everyone who heard our English accents told us that we must go to New England to see the trees. So we did, and they were right. They were indeed spectacular. As an aspiring journalist, I was always on the lookout for something that would make a good piece. But the trees weren’t it. Everyone had written about them. The guidebook even quoted Kipling writing of ‘roads paved with crimson and gold’ and that was back in 1900.

Then, on our second day, near Springfield, Western Massachusetts, we stumbled on ‘Dinosaurland’. It was an open quarry, fronted by a large souvenir shop proclaiming: ‘Buy a Dinosaur Track – Petrified Footprints for Moderns – For the Man who has everything. Propr: Carlton S Nash.’ It was clearly a quiet day in Dinosaurland as Mr Nash, was quickly on to us. He must have detected my British incredulous look. Mr Nash was very passionate about his tracks. They were Triassic, about two hundred and fifty millions years old.

He took us to the foot of the quarry and explained that it had been a dinosaur watering hole. There were sixteen layers of shale, and he had dug most of the tracks out himself. He took us into his shop to show us examples he had varnished and now sold as conversation pieces. They were mostly three-toed tracks looking like large maple-leaves. He said they looked great on a lawn or laid into a patio.

I could hardly ask him if they were genuine, but I did ask what they cost. According to size, one was between $500 and $4,000 (multiply by ten for today). I explained to Mr Nash that we lived in an apartment – no lawn, no patio. But he still pressed his brochure on us. Later, apart from wondering if they really were genuine, my wife and I discussed what sort of conversation you would have with guests after you had shown them your dinosaur track. On the way back to New York, I felt I had a piece coming on, and it started: ‘In America you can sell anything – even dinosaur tracks.’

The next thought was that a piece, satirising American domestic habits would be more acceptable to a British rather than an American magazine. Then I remembered Malcolm Muggeridge. In an attempt at resuscitation, Punch had appointed the controversial journalist and broadcaster as its editor. Dinosaur tracks might be just the conversation piece for Muggeridge.

First I’d better get the facts rights. I took myself to the Natural History Museum. The palaeontology curator was very helpful. Dinosaurland’s tracks were genuine; they are common in the Connecticut River Valley. It is a Triassic geological area, where the earliest dinosaurs wandered around leaving their hefty footprints as conversation pieces for posterity. There are double profits to be made too. One layer of rock contains the imprint, while the layer above contains a natural cast, and both can be sold.

The phone rang announcing the curator’s next visitor. The curator motioned me to stay. ‘You must meet him – Leonard Hungerford, an Australian concert pianist who collects dinosaur tracks.’ Hungerford was a hefty man in his mid-thirties, carrying a large holdall. I was introduced as an Englishman interested in dinosaur tracks. Hungerford greeted me like a kindred spirit. He opened his holdall and produced a small three-toed dinosaur track, his latest find. I listened in awe as they set about the identification. They decided it was a young Coelophysis.

Afterwards I went for coffee with Hungerford. He told me on a recent trip he was digging within a couple of hundred metres of Connecticut jail. A police car arrived. Two policemen got out and asked him what he was doing. ‘Digging for dinosaur tracks,’ he said. The policemen looked at each other. One got back in the car and Hungerford heard him saying into his radio phone, ‘Hey, you heard of guys trying to dig their way out of jail. Well, we’ve got a nut here trying to dig his way in.’ Eventually, Hungerford managed to prove his identity and his sanity.

Back home that evening, I started writing. I airmailed the result to Muggeridge. It was a few weeks before I had a reply. He liked the piece and was going to run it. This would be my first byline in a British publication.

Hungerford became a good friend. We were invited to his home outside New York, a great jumble of prehistory and music. We went to a recital he gave at Carnegie Hall. On our last visit to his home – we had decided to go back to the UK – he gave us a farewell gift: the young Coelophysis footprint. Naturally, we brought it back with us. Initially we lived in a flat, then another, and neither had a garden or a patio. When we finally moved to a house, our conversation piece had vanished – maybe recognised and taken by a knowledgeable removals man. Millions of years after it had been made in Western Massachusetts, we had lost it in north London. But I still have an LP of Hungerford playing Bach and Beethoven, as well as a copy of the piece that I wrote for Malcolm Muggeridge.

PS I checked and Dinosaurland is still going strong.

My work is much more fun than fun - Liz Hodgkinson