Our debt to Mussolini 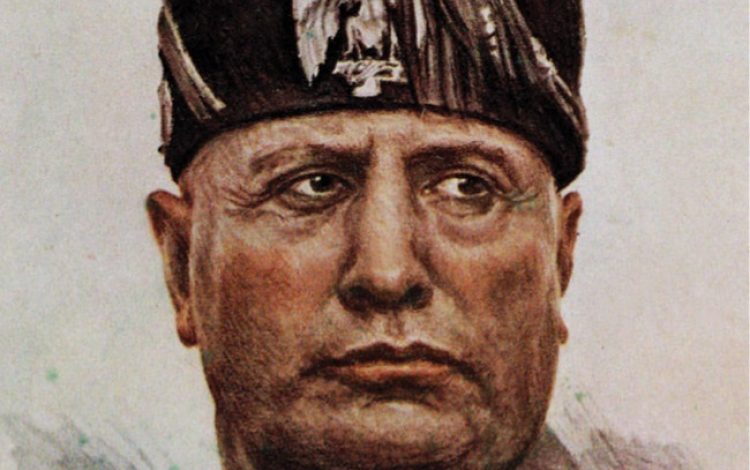 Allan Massie argues that if Italy hadn’t entered the Second World War, Hitler might have won it

The death of Bruno Lonati, a wartime Partisan who, somewhat late in the day, claimed to have been the man who shot Mussolini, reminded me of a conversation, forty years ago, with an Italian friend in a Roman .

‘You British,’ he said, ‘should put up a statue of Mussolini in London.’

‘Why on earth should we do such a thing?’

‘Because, but for Il Duce, Hitler would have won the war.’

A crazy statement? That was my first reaction. Yet, the more you think about it, the more justifiable it is.

Mussolini entered the war late in May 1940. He did so hesitantly. Nevertheless he wanted his share of the spoils. All the same it was rash. His Chief of Staff, Marshal Pietro Badoglio, told him it was ‘madness’.

Badoglio was soon proved right. In the autumn and winter of 1940–41, General Archibald Wavell and his small British army routed the Italian forces commanded by Marshal Rodolfo Graziani. The Italian African Empire was wrapped up, the Emperor Haile Selassie restored to the throne in Ethiopia. Wavell’s victories boosted British morale on the Home Front. Without them there was precious little to cheer about. Moreover, without Mussolini’s intervention, British forces would hardly have been engaged in action anywhere. The peace movement in Britain would have been strengthened. Why, they would have argued, continue to prosecute a war when there is no one available to be fought? Why not come to terms with Germany? Hitler then would certainly still have welcomed peace with Britain, but it would have been peace on his terms, a sort of victory.

As a result of Wavell’s success in the western desert, Germany would come to Italy’s aid in North Africa with Rommel’s Afrika Korps sent to engage the British. This was, for Hitler, an unwelcome diversion.

That same autumn of 1940 Mussolini had invaded Greece. He was soon in difficulties. Once again Germany had to intervene; another diversion, and a more important one. According to Hitler, this ‘delayed in a catastrophic way our attack on Russia. If the war had been conducted only by Germany and not by the Axis we would have been able to attack Russia by 15, May, 1941’. Had that attack not been delayed by six weeks, Moscow might have been taken, the Soviet armies over-whelmed before winter set in. But troops which would otherwise have been available for the Russian campaign were tied up in Greece and the Balkans, and also in North Africa – thanks to Mussolini. Hitler came very close to defeating the Soviet Union in 1941. He might have done so but for these diversions.

The Desert War in North Africa continued. Montgomery’s victory at El Alamein in October 1942 was followed next month by the Anglo-American landings in French Algeria and the mopping-up of Axis forces. The war on the southern shores of the Mediterranean provoked by Mussolini in 1940 was over. However, the consequences of his decision to ally himself to Hitler were not yet played out.

Stalin was urging his Western Allies to launch a Second Front in northern Europe as soon as possible. The Americans were also eager for this. Churchill was aghast. He knew how perilous a cross-Channel invasion would be. Both he and the Chief of the Imperial General Staff , General Alanbrooke, believed any such attempt in 1943 would be disastrous. But something must be done to placate Stalin and satisfy the Americans. Churchill argued for a continuation of the Mediterranean strategy. The Allies should strike at what he called ‘the soft underbelly of the Axis’. The Second Front should be in Italy, not France. A successful invasion of first Sicily and then the Italian mainland would lead to German divisions being diverted to support Mussolini. This would appease Stalin.

In fact the underbelly proved anything but soft, even after Mussolini was dismissed by King Victor Emmanuel, and the new Italian government sued for peace. The campaign in Italy against the German army was arduous and bloody; the war there continued right up to May 1945. But Churchill’s argument had gained a year in which to prepare effectively for the cross-Channel invasion of France. Even so, D-Day was a close-run thing.

Mussolini made a dreadful mistake by going to war. He brought great hardship on the Italian people. He destroyed himself and his Fascist movement, which, you may reasonably say, was a good thing. Viewed objectively in a wider perspective, his engagement in the war benefited the Allies, particularly Britain, for it gave us victories that were much needed for national morale. It weakened Germany by – very probably – delaying the attack on Russia and by compelling Hitler to spread his resources too thinly and eventually fight on three fronts rather than only two. Moreover, by enabling Churchill to argue for an invasion of France in 1944 rather than 1943, it averted the disaster he feared, and gave the Allies a better chance of succeeding. Quite possibly Germany would have lost the war anyway, but Mussolini’s rash and stupid intervention made Hitler’s defeat certain. So we are indeed in debt to Il Duce – even if erecting a statue of him in London might be going just a bit too far.

The neglected face of English art