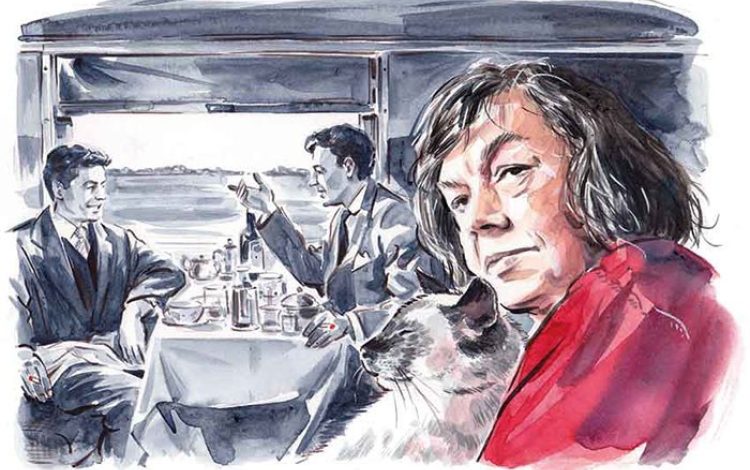 Patricia Highsmith's journals brim over with the over-emphatic, incomprehensible and rambling ruminations of an old soak. By Richard Davenport-Hines

She was also the novelist who achieved early acclaim with Strangers on a Train (1950) and later made the murderous sociopath Tom Ripley into the quasi-hero of five novels.

The existence of intimate diaries is a surprise, too. In her lifetime, Highsmith defended her privacy with fearsome aggression. She lived in Switzerland in a brutalist bunker with arrow slits for windows. Interviewers seeking intimate admissions were repelled. She unpicked other people’s efforts to thread her novels and her personal life together.

Yet it now transpires that the reticent and covert Highsmith left 56 identical, spiral-ringed cahiers, totalling some 8,000 pages and written over more than half a century, secreted at the back of her linen cupboard, to be found after her death. These comprised the working notebooks of a professional writer, written almost entirely in English, intermeshed with the intimate diaries of a conflicted and increasingly irritable malcontent, which were written, at different times, in French, German, Italian and Spanish as well as English.

These literary leavings have now been abridged and arranged by a conscientious and admiring Swiss editor, Anna von Planta, who knew Highsmith well.

The text sketches Highsmith’s rackety, emotionally chaotic youth in New York during the 1940s, her next phase of transatlantic restlessness during the 1950s, her settling in Suffolk in 1963, her life in provincial France from 1967, and her last 15 years in Switzerland.

Nearly a thousand pages of unpublished writing by the killer-clawed, raging Highsmith sounded an exciting prospect. But if her eager aficionados hope to be absorbed by this book, to understand and sympathise with her or to make new sense of her literary work, their disappointment will dawn swiftly.

The diaries are not only morbidly self-absorbed, but monotonously so. Who else but a hopelessly vain egocentric could write – with complacency or indignation it is not clear – ‘God is completely indifferent as to whether I behave well or badly’?

Her sexual affairs with other women are tempestuous, but her intensity often seems histrionic and self-regarding, as if she is admiring herself playing a rather ham part. As a lover, she sounds like Donald Sinden or Robert Hardy rather overdoing their lines.

A lot of callow political opinions are blurted out, to the evident embarrassment of von Planta. Once again, they are stagey, combining the obstreperousness of Russell Brand with the obstinacy of Laurence Fox.

Through the years, Highsmith notes meetings with interesting people – Margaret Atwood, Stephen Spender, William Trevor and Gore Vidal – but seldom assesses or describes them. One rare exception comes in 1952 when she visits Ischia, where she calls on a barefoot W H Auden. They talk mainly about a subject of consuming interest to them both – money. There are, indeed, many uninformative references to accountants, tax liabilities and graduated earnings in Highsmith’s diary.

On another occasion, she goes to bed with Arthur Koestler. ‘A miserable, joyless episode,’ she records. ‘Absurd and blush-making to set down.’ Koestler, however, is not the inexperienced sexual partner to whom she sent an egg-timer with a covering note reading, ‘The best things in life last at least three minutes.’

‘I am the drunken bee wandering into your household,’ Highsmith wrote in 1962. Drunken bee is about right, for she was an alcoholic who had whisky for breakfast, and latterly limited her solid intake to peanut butter.

The journals brim over with the over-emphatic, incomprehensible and rambling ruminations of an old soak, along these lines:

‘Beauty, perfection, completion – all achieved and seen. Death is the next territory, one step to the left. I don’t want to see any more, to feel or experience any more. Anything else would be a lowering; would put me into the vegetable category. I have known beauty, dear boys, more than I – or if the truth be told, anyone else – would ever expect or extort by worldly ransom for worldly good behaviour.’

There are some reasonably evocative descriptions of a visit to North Africa, but most of the travel writing is holiday-postcard stuff. In Lisbon, she records that she bought a gold chain for $30, using American Express cheques, that the taxis are all Mercedes-Benz and that ‘mostly the people look well-off’.

Von Planta has made an incomprehensible decision to preserve the anonymity of people mentioned in these mainly banal journals, most of whom are long dead, which lends a factitious mystery to the proceedings.

She has also used a cryptic footnoting system of symbols such as ¶ and †, sometimes doubled as §§ or ‡‡ (though mercifully not ‼), which gives unnecessary trouble in deciphering.

Steeped in the stage