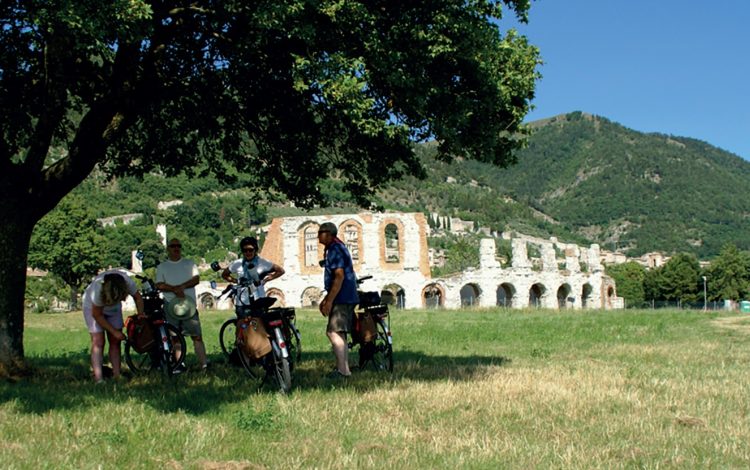 E-bikers in front of the Roman theatre below Gubbio, built in the first century BC
View Full Size
1
of 1

Don’t imagine an e-bike will do all the work for you – you still have to make quite a bit of effort. That suited Deborah Maby

On the day of my first e-biking experience, I made my partner, Christian, get up at 7am to play tennis before we left because I was afraid we wouldn’t get enough exercise, such was my ambivalence about the idea of a motor-powered bicycle.

I had imagined that riding an e-bike entailed nothing more than pressing a button, and off you went. This may be true of some models, but the ones we were on were far superior, I was assured by their owner, Tim Hudson, who, along with his wife, Louise, and an engaging young Italian called Matteo Baffi, runs Inspired Italy, which has just ventured into e-biking tours.

We met the couple because Christian part-owns a house near them in Umbria. There is a large expat community here, but Tim and Louise are rather different from the rest: they are younger, for a start, and are still working – very hard. Every winter they decamp with their four dogs to a rented flat in the Dolomites, from where they organise so-called ski safaris, taking punters on five-day tours around the area. These have proved so successful that they have now decided to adapt the same principle to e-biking tours in Umbria in the summer months.

We had no intention of doing the whole tour but were persuaded by Tim to try out a sample day, with him as guide. As keen and fit cyclists, we had always made it clear we thought e-biking rather more suited to real oldies or people who were extremely lazy or unfit. Tim was determined to prove us wrong.

We picked the bikes up at their showroom in Lisciano Niccone, which is full of e-bikes, panniers, water bottles and maps. I was pleasantly surprised by the bikes’ appearance – they were not at all the frumpy old-lady contraptions I’d imagined. (They are made by Raleigh, sadly not in Nottingham but China, and powered by Bosch.) They are fitted with thick canvas panniers but if you do a tour, your serious luggage is taken to each hotel by car.

Tim explained the different settings on the bikes. You always have to pedal, and the harder you pedal the more power the bike gives you back – a bit like paying into a workplace pension scheme. There are five settings: the lowest simply neutralises things, so the weight of the bike is offset by the power, making it the same as riding a standard push-bike. Then comes Eco, which gives you a bit of extra oomph, Tour, Sport and finally Turbo for really steep hills or when you’re late for dinner. ‘I use Turbo all the time,’ said Tim cheerfully, ‘because I’m a fat lazy bastard’ (not true).

Christian and I spent the first half-hour boringly discussing which mode we were in. He claimed to be in Off a lot of the time, which I didn’t believe, while I was very happy in Eco, with occasional spurts in Tour, and Sport for hills. I am only an averagely fit cyclist but I am rather good on hills and take great pleasure in sailing past people when they least expect it, so it was annoying to know that if you did that on an e-bike they would simply assume you had just whacked your bike into Turbo.

Tim had planned a 65km round trip, which included a castle, a lunch stop, a stretch on a traffic-free track alongside Lake Trasimeno, and a visit to the site of the Battle of Trasimeno in 217 BC. All of these are included on one or more days of the week-long tour.

We set off and climbed up to Castello di Pierle, a mediaeval castle that stands guard above the Niccone Valley to protect Cortona from the enemies of Perugia. It is ruined, but still commanding. There were feral cats running around and an old woman sweeping in front of her house.

Our next stop was the Castello di Sorbello, an extraordinary, partly ruined fortress, still lived in for some of the year by the Marquis Ranieri Bourbon del Monte, whose name suggests he is the sire of several dynasties, and his wife and sister, who allowed us to look into their dungeons. He was sitting outside, two dogs at his feet, a book on his lap, baggy corduroy trousers held up with string, looking like something out of a Molly Keane novel about faded Anglo-Irish aristocracy.

On we cycled towards the wonderful hilltop town of Preggio, location for several music festivals in the summer, but turned off before the road rose steeply and spent the next half-hour or so on a completely deserted route running through a lush valley. Umbria manages to be both green and rugged and wild, and is to my mind infinitely preferable to the manicured beauty of Tuscany. Then we whacked the bikes into Sport mode and up we climbed to the Pian de Marte for lunch in a beautiful country house hotel, and to charge up the batteries – the modern equivalent of watering the horses. After lunch, up, up and up we went to Castel Rigone, with its stunning views of Lake Trasimeno. This was where the bikes really came into their own, as we felt we were pushing ourselves, but didn’t arrive at the top completely wiped out and needing to collapse onto the grass panting for ten minutes to recover.

The descent and a long ride along the lake were rewarded with an ice cream in the town of Passignano and the return to Lisciano Niccone was via the site, near Tuoro, of the slaughter by Hannibal of 15,000 Roman legionaries in 217 BC.

Out of interest, Christian and I rode our ordinary bikes up to Castel Rigone a few days later. The difference was astonishing: I felt the hill would never end. This makes me wary of e-bikes, as you could so easily get spoilt and seduced by the ease of it all. While you do build up a sweat, it’s nothing like the feeling at the end of a day’s normal cycling.

I’m not quite ready for an e-biking holiday myself yet, but I can certainly see the attraction. You can cover so much more ground for one thing and, because you’re not so intent on the physical effort required, you are free to enjoy the scenery much more. And they are perfect for those who either don’t want to or can’t push themselves too much. I can certainly imagine myself on one very happily in a few years’ time.

‘You’ve burned off 1,700 calories,’ Tim informed me, consulting some app on his phone. ‘That’s only 792 fewer than you would have done on a push bike.’ Great – let’s go and have that pizza, then. And I really needn’t have bothered with the tennis that morning.

Inspired Italy offers a seven-night, six-day Electric Bike Safari through Tuscany and Umbria, following roads and routes once favoured by St Francis of Assisi and Hannibal. The per person price of £1,895 excludes flights and wine but includes airport and daily luggage transfers, all meals and coffee stops (except for a day in Assisi) and e-bike. Full details at www.inspireditaly.com.