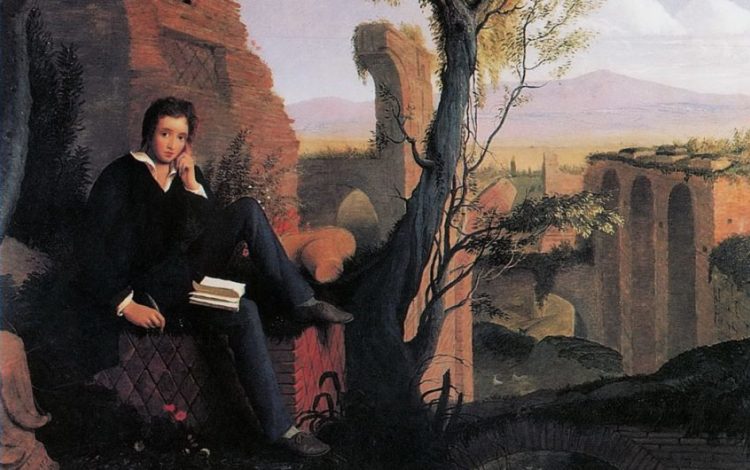 When we were reading English at St Anne’s, Oxford, my friend Cathy and I loved hearing John Carey lecture on Elizabethan poetry.

He was by far our favourite lecturer. We admired his air of energy and insouciance as, having imparted wit and wisdom about Marlowe, Sidney, Spenser et al, he would fasten his bicycle clips round his chunky, earth-coloured corduroys and wheel off, tweed jacket aflap.

Cathy and I would then repair to a tea room in Longwall Street, eat florentines among the macramé baskets holding drooping spider plants, and discuss what we’d heard.

Carey was a real influence on the way we read – so I’m delighted, 40 years later, to review A Little History of Poetry.

Yes, 40 years on, he’s still got it. At 85, John Carey is an oldie to be proud of. This is the latest in Yale’s Little History series (digestible books on big subjects by eminent authors – alas, none of them female). Carey’s task is to condense worldwide poetic achievement over 4,000 years into 295 pages.

There are no scholarly footnotes; no discussions of critical theory. Carey tethers the poems lightly to the time and place within which they were created, and asks us to consider why these have survived when countless others have not. Poetry, says Carey, is ‘language made special’; he wants to show us how.

One problem is that it’s difficult to show what’s special about the language of poems in translation. He starts with Gilgamesh, the Mesopotamian epic preserved by the pressing of wedge-shaped bits of reed onto wet clay tablets, and admits that we have no idea what it sounded like. So is Gilgamesh a poem at all, or just a story?

Our knowledge of Homer’s Greek and Virgil’s Latin is so very much more sophisticated that we can justifiably claim to understand something about their use of language. But, in covering works written in 15 languages ancient and modern, Carey often resorts to describing subject matter rather than sound and rhythm – the qualities that make poetry resonant and memorable.

Not that subject matter isn’t important. It’s fascinating to trace the emergence of dominant themes – love, death, suffering, heroism, worship and immortality; in essence, ‘the meaning of life’. And by ranging from China to Chile by way of France, Russia, Germany and more, Carey draws comparisons and contrasts which illuminate the English-language poetry that is his prime territory.

Carey can condense such a mass of material in a helpful and entertaining way because of the clarity of his thought. This is his unique selling point. He can summarise without triteness; we see exactly why he thought this poem or that poet mattered. Here he is on Satan’s defiance in Paradise Lost: ‘We can all recognise that as heroism, and the poem teaches us that heroism can be evil.’ Whitman’s Song of Myself is ‘an epic of the new America … voiced by a giant consciousness that spans the whole continent and all the spaces beyond, and tells its readers that they are part of him’. Burns’s ‘great gift is authenticity’. He writes, ‘How people speak, move, dress and look are vital for Browning’s art – even their proneness to catarrh.’ Ted Hughes’s ‘aim is to reinvigorate language’. ‘What makes [Donne] new is that he is always arguing,’ he says.

Carey, like his admired Browning, has a gift for the specific. Marianne Moore’s poems ‘often feature small creatures in cramped or menacing surroundings’; in Shakespeare’s art, ‘abstract nouns are made agents, performing real acts’.

Carey’s preferences peep through. He particularly loves Edward Thomas, rates Larkin as the poet of his generation, and thinks Kubla Khan the most marvellous poem of all time.

His judgements, occasionally, are too strong – he’s out of sympathy with Dante and Petrarch, is dismissive of lovely James Thomson and decides Tennyson’s greatness ended in 1855.

Inevitably, there are omissions. My chief regret is for English medieval lyrics, the Scottish makars, dear Edmund Blunden and nursery rhymes or any other children’s poetry. Others will search in vain for contemporaries such as Duffy, Armitage, Oswald and Nagra, groundbreakers such as e e cummings, or the influence of rock and pop. And surely we should glance in the direction of the King James Bible and the Book of Common Prayer?

But Carey simply couldn’t include everything in his Little History, and overall it’s a miracle of compression. Carey guides his lucky reader with the confidence of experience and – dare I say it? – the wisdom of age.

Lenin the Dictator: An Intimate Portrait by Victor Sebestyen