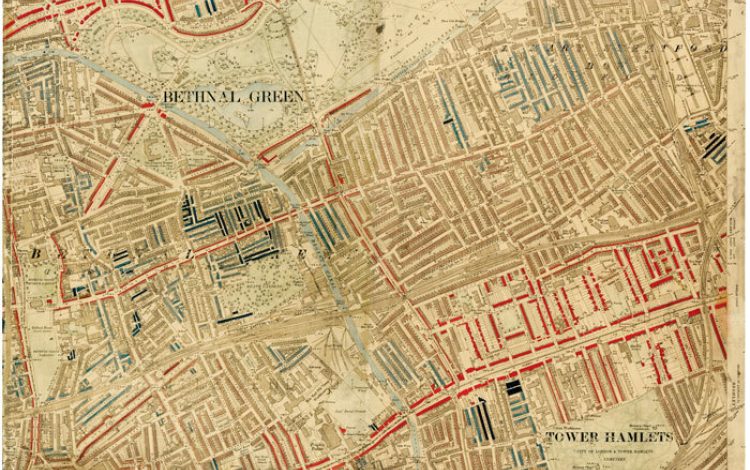 A new, giant edition of Charles Booth’s maps shows Victorian London in all its lurid misery

Booth highlighted the capital’s squalor via brilliant means – he mapped it.

Together with his team, Booth walked every street in the city, recording their research in over 450 notebooks. His masterstroke was to illustrate that research in 12 colour-coded maps, printed in giant, supersharp form in a new edition.

His system divided the city between the carefully-chosen colours of gold (‘Upper middle classes and Upper wealthy’) and black (‘Lower class. Vicious, semi-criminal’).

As the volumes of maps and research were published, between 1889 and 1903, Booth’s maps had a revolutionary effect on the public understanding of London’s – and Britain’s – poverty.

The books revealed that 35 per cent of Londoners were living in abject poverty. They also showed quite how starkly rich and poor London were divided by geography. The East End (pictured) was painted heavily in black (‘Semi-criminal’) and dark blue (‘Very poor’). As you move west, the streets turn red (‘Middle Class, Well-to-do’) and wealthy gold.

This was partly to do with the East End docks; Victorian docks tended to be poor areas. It was also explained by the prevailing south-westerly wind. Soot and smoke from London’s rich south-west were deposited on the poor north-east.

How little things have changed. For all east London’s gentrification, the super-rich are still concentrated in the west.

Jezza, my friend and right-hand man