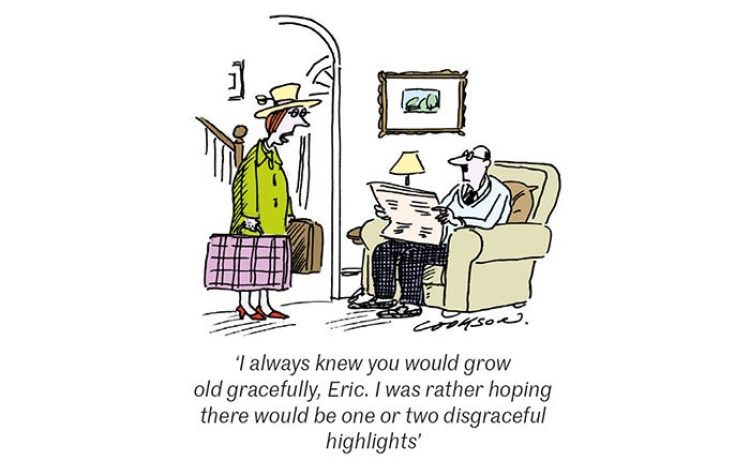 Liz Hodgkinson, 77, says oldies were born to be wild

Old people are usually thought of as crusty fuddy-duddies.

They’re supposedly behind the times, old-fashioned and out of it, muttering about the sad decline of standards and the lax morals of modern youth. As Shakespeare wrote, ‘Crabbed aged and youth cannot live together. Youth is full of pleasance; age is full of care.’

Now we’re seeing a reversal of the stereotype. These days, oldies are the carefree ones and the youngsters are stick-in-the-muds. Today’s youth are the most conformist of all time; they hardly seem to have a rebellious bone in their bodies.

We oldies couldn’t wait to leave home and establish our independence. We thought even the grottiest flats were heavenly.

Our young counterparts are happy to stay in their cozy parental nests well into their twenties or thirties, waited on hand and foot.

‘If only mum could see me now!’ was our proud boast. We imagined her horror at the dirt and clutter we unashamedly accumulated around us, including unsuitable boyfriends and girlfriends who stayed the night.

Today’s youngsters don’t smoke, drink or even have boyfriends or girlfriends. When my late teenage and early twenties grandchildren last visited, they were drinking Coke while I, aged 77, got tipsy on wine. They’re the new puritans.

And they unquestioningly obey the law, sticking rigidly to whatever virus restrictions might be imposed on them. They tell us oldies to do the same while our instinct remains to rebel. We question everything and demand answers before we agree to kowtow. Today’s youngsters are far more timid than we were, and this has got worse in COVID-induced lockdowns. But, for us, pushing boundaries is a habit.

It’s a habit established over decades, and not about to change. When we were young, we studied all political creeds and established viewpoints, and fought for the right to have our voices heard rather than to be silenced. It was only through intense campaigning that we got the voting age lowered from 21 to 18.

And we are still in the habit of asking awkward questions.

Why is this? It’s because we were young people in the Sixties, when youth culture was a brand-new phenomenon. We constituted a separate section of society and asserted our individuality by cocking a snook at our elders. Mind, we had a lot to rebel against.

For the first time, we had our own subversive music, scandalous style of clothes and our own vernacular.

The more shocking the older generation found our behaviour and dress, the more we revelled in being outrageous. We took particular delight in overturning everything our timid parents stood for, from three-piece suites to Gilbert and Sullivan operettas and the prohibition on sex before marriage.

We were the first generation to have actual birth control, in the form of the Pill, separating sex from conception. We were the first to live together without being married. We campaigned for legal abortion, equal pay, equal opportunities, gay rights and decriminalised cannabis.

We were the first cohort, in large numbers at least, to smoke pot, defy the laws of the land and risk being fined or imprisoned for doing so.

Our attitude was: why should these boring oldies tell us what to do? We went on Ban the Bomb marches and, once again, risked imprisonment for sitting down in Trafalgar Square.

Our parents were horrified that we were taking the law into our own hands rather than meekly obeying. But they could not stop us.

Yes, some of the young go on school strikes to protest against climate change – encouraged by 18-year-old activist Greta Thunberg – but from a safe distance. Society smiles on these protests and, again, there is no chance of them getting arrested, let alone imprisoned.

Even when we left youth behind, we carried on fighting injustice. It was now in our blood and we have grown old with that same attitude of defiance. That spirit of pushing boundaries has never left us and the young hippies of yesterday have become old hippies today.

Many of the battles we fought have been won and present-day youths have little to fight against.

Unlike us, they have been cosseted and helicoptered from their earliest days and see no need to defy their parents or the law of the land. They have been too indulged all their lives to have inculcated a revolutionary attitude. They even like and listen to the same music as their elders.

They are chauffeured all over the place and their bedrooms are havens of luxury and opulence, containing all the latest technology, duvets and sofas. Our bedrooms were cold, miserable places that we were sent to as a punishment and, therefore, wanted to flee.

No wonder they have little desire to bestir themselves, to rise up and rail against society. You cannot be an angry protester from a comfortable billet. You have to desire a better world for yourself and be prepared to strike out for it. We struck out and we are still doing so.

And, in much the same way that we made the older generation shudder, today’s teenagers are shuddering at our attitudes.