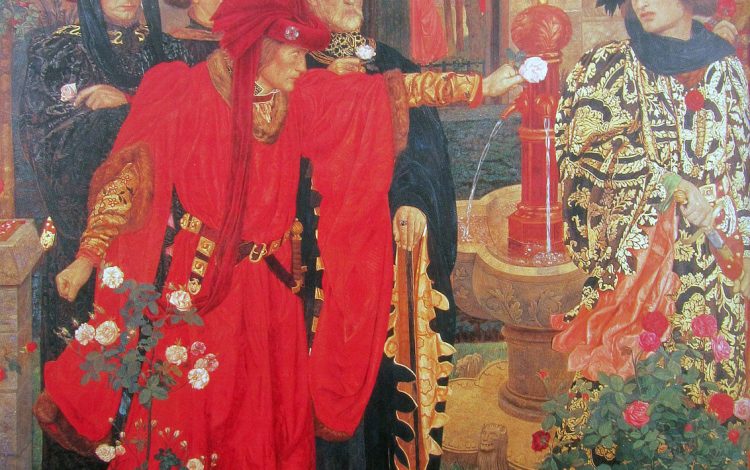 David Wheeler examines the history of the 'English' rose

‘Introduced from another country’ and ‘alien’: those two definitions of ‘exotic’ are familiar to gardeners everywhere.

Is exoticism eternal? And if not –plants of course being seen differently from human beings – how long might it take for a vegetable incomer (en- or discouraged) to claim native status?

Few plants seem more at home in an English garden than roses, yet only a few – Shakespeare’s eglantine (the sweet briar, Rosa rubiginosa), for example, and the burnet rose of Pembrokeshire (R pimpinellifolia) are deemed truly native.

Another, our familiar hedgerow dog rose (R canina), once had quaint medicinal functions, according to Geoffrey Grigson, when ‘used against a hundred ills, from St Anthony’s Fire [ergotism, a hot, bright red skin infection common in the Middle Ages] to the French pox [syphilis]’.

Earlier still, roses were sufficiently well settled in our soil and mindsets to enable the Houses of Lancaster and York to be represented by them – red and white respectively, supposedly plucked in Temple Gardens in London (pictured).

The question remains, though: whence came these prickly bushes? Did an ancient wind or wave ferry their seeds from afar?

I wouldn’t want to see or join a fight between sole collectors of either the native or the exotic. My largely exotic collection of woodies is skilfully ‘nursed’ by many British natives – principally silver birch (Betula pendula). They grow fast, have attractive gnarled bark – even as juveniles – and their minuscule seeds provide life-saving winter foraging for flocks of long-tailed tits. Importantly, birch shade is dappled, less dense than that thrown by other commoners such as oak, sycamore, chestnut, beech and lime, so other plants can thrive in its understorey.

I also nurture two species of native cherry: Prunus padus (bird cherry or hackberry) and P avium (the gean, Housman’s ‘lovliest of trees’). Both wear ‘white for Eastertide’ (Housman again), the first sporting several-inch-long racemes of clustered flowers, the other exhibiting corymbs of up to six individual blossoms bunched together like miniature single roses – appropriately, as cherry trees, botanically, belong to the rose family.

The fruits of both – botanists call them drupes – are small and beloved of many garden birds, often before they are fully ripened. Our dogs mindlessly truffle fallen ones, oblivious of their tiny amounts of cyanide (the same flavour-giving chemical compound found in almonds), and so we try not to linger in the grove in that season.

Human fatalities from overeating bitter almonds (the nuts of P dulcis) are not unknown. While both our wild cherries are British natives, they are also found throughout mainland Europe, across Asia and in cooler parts of North Africa. The bird cherry also lodges in Japan, a country famed for outrageously beautiful cultivated flowering cherries.

The wayfarer’s kin, the guelder rose (V opulus) gave Grigson a delightful flight of fancy: ‘Get [the flowers] close and they smell like crispy-fried, well-peppered trout [his wife, remember, was a cookery writer], if you can imagine that trouty, peppery smell with a touch of sweetness.’ Gardening: I'm in the pink