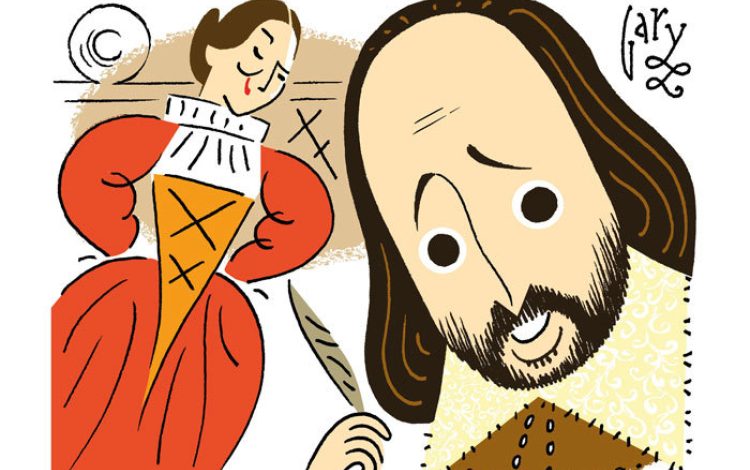 As I was sitting almost stony-faced in the stalls of the Gielgud (now closed due to the virus – please consult the theatre website for production updates) while all around me the audience exploded with mirth, I tried to account for my mood.

I was a little unwell, but then I had been so the previous evening, when I had binge-watched, with increasing delight, the first series of the TV show that this play is a version of.

Written by Ben Elton and starring David Mitchell, it came out in 2016, and was a comic, very Blackadderish take on Shakespeare’s genius, and if it looked as if it wanted to be Blackadder then that was fine, because Ben Elton wrote both, and writers are allowed to rip themselves off.

So I went back home and watched the second series, to see if I had gone off the whole idea of the show. Nope: the second series was, if anything, even better than the first: beautifully written, tight as a drum, with jokes so good and clever, and delivery so perfect that at times I was crying with laughter – and, once or twice, with more complex tears, for at times the show dares poignancy, and achieves it.

I suppose part of the stage show’s problem is that it’s more or less critic-proof. (The title comes from the very fact that Shakespeare was called ‘an upstart crow’ by his contemporary, the critic Robert Greene.) Look at the wall of the Gielgud, and look at all the five-star reviews. I’ve never seen so many.

So I was really looking forward to seeing the play. It had David Mitchell in it. It was written by Ben Elton. Several of the other stars from the TV show resume their roles on stage. What could possibly go wrong?

The play opens on to bare, wood-panelled walls: like the series, the stage show makes a virtue of its cheapness.

An African princess is washed up on shore (the sea being a gloriously cheesy blue sheet being manipulated in the wings). She makes her way to London and … look, there’s really no point in following the plot. It’s a mash-up of Twelfth Night, A Comedy of Errors, Othello, The Winter’s Tale and just about every convention of Shakespearean stagecraft that Elton can cram in. There’s a dancing bear, Mr Whiskers, who is a big hit with the audience, and is brought on to supply Shakespeare with his most famous stage direction. You know the one I mean.

The whole thing is very silly, you might think, when you notice that Dr John Hall (Mark Heap)’s codpiece gets bigger and bigger with each scene – but that’s not necessarily a bad thing. There’s a lot of Getting Back at Shakespeare in this, and that’s entirely understandable. For Shakespeare unites a nation in frustration at the fact that the greatest writer in all human history wrote plays that went on for hours, and not only that, but in Elizabethan English.

Actors and writers have to study him; even more so than everyone else. But the show, both TV and stage, always keeps in mind the fact that Shakespeare is great; and when, in Act 2, a five-minute scene from Othello is done straight, the audience is silent and reverent. That this was the highlight of the evening is telling.

But let’s concentrate on David Mitchell. It’s his show, and the stage feels empty when he’s not on it. Amazingly, this is his first West End role, and he throws himself into it. There is something hugely generous about this. He is one of the great adornments of the age, and we should be grateful to have him.

His schtick, as we all know, is vigilant and occasionally appalled self-awareness; and you’d think that, after 25 years or so, this could get exhausting, or exhausted. But it doesn’t look like that: not only do we not tire of him, but he doesn’t tire of himself, because he started tired. (Actually, I begin to think he’s the Greatest Living Englishman, or at least our most beloved comedian, Stephen Fry having handed over the crown.)

Mitchell is superb, of course, as Shakespeare: he plays Shakespeare as David Mitchell – the tetchy little-Englander grump who knows he’s brilliant but has been condemned to live in a country where people who are brilliant are routinely put down, in one way or another, by almost everyone they meet.

But the play, lacking the disciplined format of the 30-minute episode, fails to ignite in the way the TV show does. Here, then, is a lesson in the anti-magic of theatre. Mitchell has to deliver all of his lines forte, because otherwise you won’t hear him, and this means much of his nuance is missing. And the audience doesn’t care, because – look! It’s David Mitchell! And Mr Whiskers, the dancing bear!