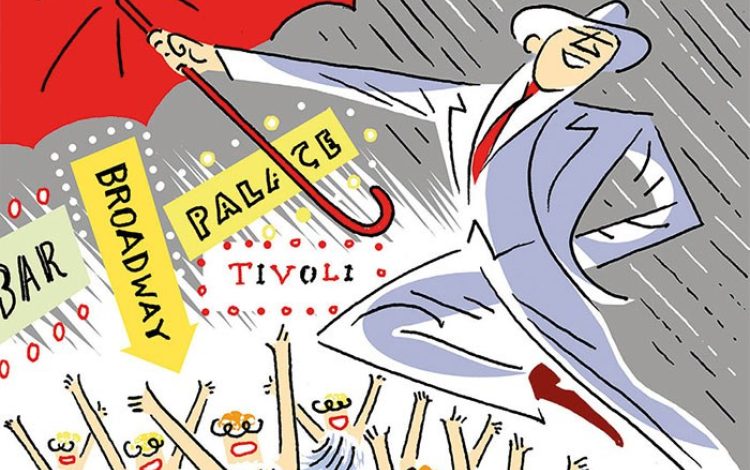 Dancin’ in the rain: Sam Lips as Don Lockwood
View Full Size
1
of 1

The toe-tappin' classic is a joy, says William Cook

Cinema used to look to the theatre for inspiration. Nowadays, it’s the other way round.

The best musical I saw last year was Mary Poppins, a brilliant stage version of a classic film, and the best musical I’ve seen this year (or will see all year) is this silky adaptation of that timeless movie Singin’ in the Rain.

Singin’ in the Rain premièred at Chichester Festival Theatre back in 2011 and then went into the West End. It had a run at Sadler’s Wells last summer, and now it’s touring, with a new cast. It’s a perfect tonic for these troubled times – a seamless show full of wonderful songs which makes you want to dance your worries away.

The film is now 70 years old, but it hasn’t dated in the slightest (I saw it again just the other day and it still felt as fresh as ever.) Sensibly, this stage version sticks pretty faithfully to the MGM original. After all, it’s commonly – and quite rightly – regarded as the greatest musical movie ever made. Why change a winning formula?

What made the film so good? The songs, of course, and the dancing, but above all it was the interplay between the three principal performers: Gene Kelly, Debbie Reynolds and Donald O’Connor. Naturally, the stars of this stage show can’t hope to imitate them, and thankfully they don’t try. Rather, they create a relationship that’s all their own.

American Sam Lips has the unenviable task of filling Kelly’s dancing shoes, and although there’ll only ever be one Gene Kelly, he brings something new to the part of Don Lockwood, the silent-movie star whose career is thrown into crisis by the arrival of the talkies. His footwork is faultless, and beyond even that his sensitivity brings the role alive. His Lockwood hides insecurity beneath a brash Hollywood veneer. But when he falls for aspiring starlet Kathy Selden, his compassion shines through.

Charlotte Gooch is enchanting as Selden – her rich singing voice illuminates every note – and again it’s the quality of her acting that elevates her performance above the level of showbiz razzmatazz. It’s relatively easy to wow an audience – far harder to make them feel.

Ross McLaren is full of fun as Cosmo Brown, Lockwood’s faithful sidekick, with an instinctive flair for comedy and a smile that lights up the stage. His gutsy rendition of Make ’Em Laugh deservedly brought the house down.

You really believe in these characters. This belief sustains the drama, making this production far more than just another jukebox musical. Yet ironically, a jukebox musical was exactly how Singin’ in the Rain started out. It began as a ragbag of golden oldies, nearly all of which had already featured in other MGM films. The title song was a number one hit for ukulele-player Cliff Edwards way back in 1929.

The thing that saved Singin’ in the Rain from B-movie status was the warm and sassy screenplay by Betty Comden and Adolph Green, the writing team behind Gene Kelly’s On the Town. Since most of the songs were old favourites, they decided to set it in 1927, focusing on the opening of The Jazz Singer, the first talkie, which killed off silent movies. I was glad to see that so much of Comden and Green’s script has survived.

Every aspect of Jonathan Church’s production is faithful to the spirit of the film, without ever descending into pastiche. Andrew Wright’s choreography is spectacular and often steamy, but it’s sensual rather than raunchy, and never overly acrobatic. It was Kelly’s naturalism that was most impressive, not his athleticism. Somehow, he seemed to stroll through these numbers, rather than dance. This cast all do him proud.

But the big surprise – for me, at least – was Faye Tozer’s feisty performance as Lina Lamont, the leading lady with the awful voice whose inability to sing, dance or act is revealed by the advent of the talkies. I knew Tozer was an accomplished singer and dancer (you have to be very good at these things to send them up) but I had no idea she was such a fine comic actress.

How refreshing to see a show that makes you feel better about the world around you. And how nice that these evergreen songs still make you hum along, a century after they were written.