My Fair Granny – Gladys Cooper by her granddaughter Justine Hardy 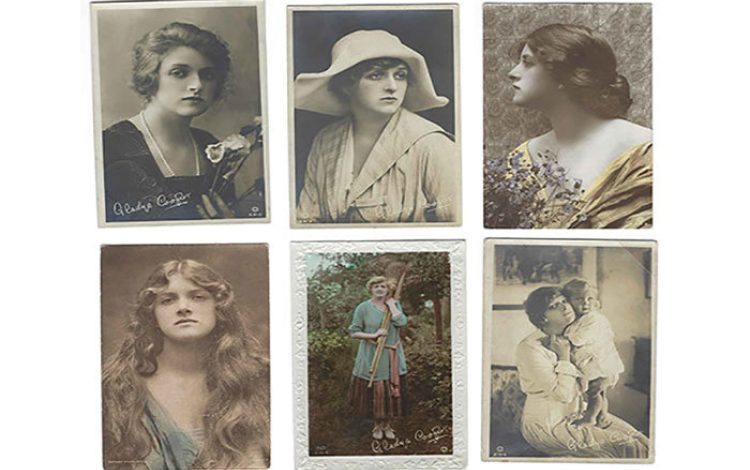 Postcards of Cooper, cherished by soldiers in the First World War trenches
View Full Size
1
of 1

His mother silences him with two words: ‘Oh Henry!’

It is a voice of crackle and silk, formed by Edwardian England, with a stretching of vowels and a stabbing of consonants that turn the pronunciation of Edwardian into ‘Ed-waar-dyn’. It is Gladys Cooper (1888-1971), actress and star of another era – and my grandmother.

I limit how often I watch My Fair Lady (1964) because I never want it to lose the power to conjure up the strong sense of my grandmother that it does – the sound, scents and colours of her.

Beyond that performance as the elegantly sharp Mrs Higgins, she played another kind of steely woman as Bette Davis’s mother in Now, Voyager (1942), and a different kind again as Laurence Olivier’s tweedy-smart sister in Hitchcock’s Rebecca (1940). These are just three of hundreds of roles that spread across twentieth-century theatre, film and television. Gladys was Somerset Maugham’s theatrical muse who then moved into film as Flora MacDonald – to Ivor Novello’s very pretty Charles Edward Stuart – in the silent film Bonnie Prince Charlie (1923).

While busy being a London stage star, she also became the first female manager of a West End theatre, the Playhouse. And then she went to Hollywood.

It was Rebecca who took my grandmother to California in 1939, and to the sparkling inner sanctum of the ‘Hollywood Raj’ – those Brits who quietly invaded Hollywood through the 1920s and ’30s, spearheaded by Charlie Chaplin.

As she continued to rise through this elegantly dressed and quick-quipping circle towards damehood, she would shrug off the story of where it had all begun – in her life as an early-20th-century version of a pin-up girl.

‘But it made you such a well-known face – surely that helped?’ Roy Plomley asked her on Desert Island Discs in 1967. He was referring to the huge sales that had made her the most popular ‘picture-postcard genuine BRITISH beauty’ of the pre-First World War era.

‘Not really; actually it was a hindrance at a time when one was trying to make a name for oneself on the stage,’ she said. ‘You know one’s favourite notice helped one to escape from it: “Gladys Cooper was a surprise”.’ Then she laughed – pure crackle.

That was the version of her that had the capacity to rile some. Dirk Bogarde said, in his prickly fashion, she had ‘all the charm of an electric carving knife’.

Yet that character was underpinned by a particular kind of confidence that was the solid ground to my sister and me, her two youngest grandchildren.

That voice, coming from the screen, or from old recordings, calls to my mind an upturned stool, on top of the kitchen table in her last home in the Thames Valley. A marmalade muslin is strung up between the stool legs, the scent of simmering oranges all around, as G prods the delicious mulch with a wooden spoon. It was always G, Gladys having become just too everyday a name as she grew in fame. And there she is again, in a perfect, straight-legged forward bend, weeding among very upright roses; G still streamlined at 80, in capri pants and a short-sleeved silk jersey the dusty coral colour of longingly remembered sunsets.

She may not have wanted to be remembered as a postcard beauty, but that part of her has spun out through time in a thread as fine and strong as any other in her life.

In the earliest pictures, she gazes out through a tumble of hair – a little bit gazelle, a lot English garden – and there is a defiance, too, a sliver of the electric-carving-knife drive that would hurtle her upwards.

When G died in 1971 (when I was four), the postcards began to come back to us. At first, they were sent by First World War veterans, paying their respects to the beauty they had carried in their uniform pockets through trench filth and home again, her image a talismanic connection with the country and way of life they believed they were fighting for.

As the veterans died, the postcards were returned by their children, honouring a part of their fathers’ lives that had rarely, if ever, been spoken of.

Then it was the grandchildren, tracking us down online, as they tried to thread together partially-known family stories. Gladys Cooper was not a familiar name to them, and they wanted to know if ‘this was my great-uncle’s girlfriend’, or ‘the rumoured fiancée who we think disappeared while my grandfather was fighting in France’.

There is barely a trickle now, and yet still some greats or even great-greats – grandchildren, nieces and nephews – reach through time, hoping to draw together threads that might connect them back to another time … of quiet heroism, those coral-coloured sunsets, and the kind of marmalade that makes everything seem right with the world.