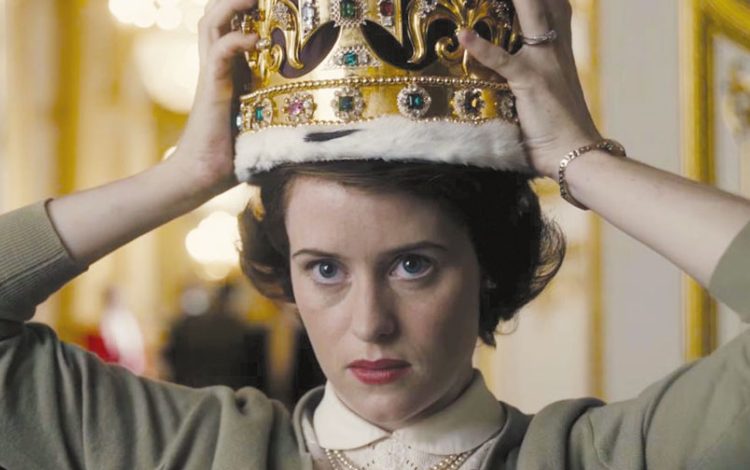 A slave to duty: Claire Foy as Queen Elizabeth in The Crown
View Full Size
1
of 1

Roger Lewis on The Crown

We signed up to Netflix to watch The Crown. I am hopeless with knobs and buttons, however, and as Lady Lewis was away, and I had to sort out the remote control gadget on my own, once I’d located the first episode I was stuck there for eight hours as I didn’t know how to make it pause. I was veritably pinioned. Luckily I was engrossed from the very opening moment, when Jared Harris as George VI coughed up blood into the lavatory bowl and immediately lit another cigarette.

Apparently £100 million was spent on this panoramic series about the Queen’s reign, so the costumes are lavish, the sets extravagant, the casting luxurious. Eileen Atkins floated about the dank palaces, a horror movie apparition in black and purple. Ronald Pickup wittered the Coronation liturgy as the Archbishop of Canterbury. Greg Wise played Mountbatten as a lounge lizard. John Lithgow’s Churchill was a monumental humped pantomime goblin – at first I couldn’t decide whether the performance was atrocious and mannered or deliberately overblown and Shakespearean. After seeing the episode where he had his portrait painted by Graham Sutherland, and the warrior’s vanity and vulnerability got to be exposed, I decided the latter. Lithgow’s Churchill is a portrayal of sensitive, gruff genius, and he was ably balanced by the brittle strength of Harriet Walter as Clemmie.

If the pedigree was sheer Downton Abbey – posh folk in nice big houses; the Establishment thwarting any innovation and terrified by change – the Queen herself was like one of the midwives in Call the Midwife. Claire Foy, with her big blue unblinking eyes, played Her Majesty as starchy, good, kind, and as a slave to duty. As for Matt Smith’s Prince Philip, however, he seemed far too juvenile, priggish and annoying. Openly contemptuous of his wife, sneering and sulking, he stalked off to bachelor parties with his Hooray Henry mates and returned in the early hours, possibly with lipstick on his flies.

The danger, not entirely avoided, was that the episodes might become episodic, with the amplitude and subdivisions of soap rather than the shapeliness and concision of art. The saga of Princess Margaret and Group Captain Peter Townsend, for example, was very protracted. Her sense of bitterness – that she was her father’s favourite but now she is lost – was clumsily done. In quite another class, however, was Alex Jennings as the Duke of Windsor. He was a match for Lithgow, lifting the show to special heights. He conveyed the empty despair of the man, as well as his rapacity and ego. Exiled in Paris, he watched the Coronation ceremony on television. But as he tried to laugh it all off, with a silly running commentary, the tension on his face and in his eyes told another story. Here was an ex-king confronted with everything that he had thrown away.

London, in the first ten episodes, was winter-bound and sulphurously foggy – very much still the Victorian city, haunted by the past. The sense of urgency and doom hanging over everyone was meant to stem from the abdication crisis, to which there were frequent flashbacks. The Queen Mother, for example, believed that what killed Bertie was being made to ascend the throne, not the cigarette addiction. Peter Townsend was banished to Brussels as to the block, because as a divorced man he was morally compromised.

Indeed, nothing was more scandalous and precarious, to these people, than the idea of divorce – Wallis Simpson hovered in the background as a bat-winged she-devil. There were also huge histrionics about whether Mountbatten could be the surname of the Queen’s children, and whether, having spent £70,000 on the renovations, the newly-weds could remain at Clarence House. Putting a stop to everyone’s fun, putting the monarch in her place, was Tommy Lascelles, played as a boo-hiss villain by Pip Torrens. Full of veiled threats and with an undercurrent of coiled-spring violence, Pip’s Tommy was a bit Third Reichy.

Overall, and despite the opulence and the pageantry, The Crown made a powerful, if inadvertent, case for republicanism. It was dinned into the young Queen that she was not to betray any sign of individuality, that her hive must lack humanity. She must not possess personal thoughts or desires or imply partiality – she couldn’t even appoint her own private secretary. The royal family must be deliberately dull, defined by negation – something the Duke of Windsor had failed to grasp. Yet if the monarchy is purely ceremonial and symbolic, put the poor old souls out of their misery, is what I felt by the end, as their existence is giving them no happiness.