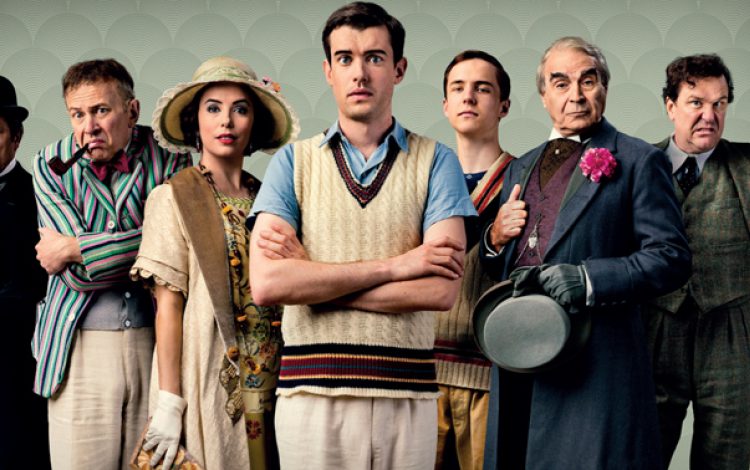 My friends Michael and Hilary Whitehall will have had a hell of a shock when they watched Decline and Fall. They were not to have anticipated that their little Jack would one day stand revealed as the reincarnation of Ian Carmichael.

On the other hand, when will television executives realise that great comic prose cannot be adapted into a visual medium? Waugh is funny and cruel through his deployment of the English language. Shift a comma, alter the emphasis, and jokes vanish. You are left with nothing but the plot.

Like Kingsley Amis – and Ian Carmichael was in the duff Boulting Brothers’ adaptation of Lucky Jim – the genius resides in the tone of voice, which is only robust on the page.

Once Jack’s Pennyfeather had taken up residence in the dilapidated Welsh public school, with its damp, mottled walls, freakish pupils, single shared lavatory, and a staff of alcoholic sadists and defrocked priests, the series became one big bore about nymphomaniacs in art deco mansions and fireworks going off accidentally.

A thin David Suchet was Dr Fagan. Suchet does not possess funny bones. Douglas Hodge made a good fist of Captain Grimes, but Waugh’s character would have found the chauffeur far too old for his tastes. By the way, Harry Worth was once in a dramatisation of Scoop – does anyone know if a print exists of that, or was it wiped ?

What I always perversely enjoy about Line of Duty is how the police in AC-12 maul the English language, turning it into the empty, jargon-ridden, abstract speech predicted by George Orwell, who you will recall argued that ‘The slovenliness of our language makes it easier for us to have foolish thoughts.’

In a series that is now about the cross-contamination of forensic evidence, with lots of diddling about with bags of blood, we heard the Assistant Chief Constable say, ‘We need a breakthrough. They’ve been killing us on Twitter.’ A prison warder was called ‘an offender management officer’. When it was thought a good idea for two teams to pool resources, Vicky McClure, or one of the other spud-faced cops, Martin Compston possibly, said, ‘We’re creating a bilateral taskforce.’ A lady inspector stopped a superintendent in his tracks and announced, ‘I will ask you to use gender-neutral language,’ and there were blank looks when Adrian Dunbar referred to Pan’s People.

Meanwhile, the ‘forensics co-ordinator’, Jason Watkins, who’d taken an electric carving knife to Thandie Newton’s head, was as dead as mutton in his own lounge-room.

If the police really want ‘public trust restored’, they could try communicating in a natural fashion and put an immediate stop to the pretentious diction that resembles, as Orwell put it, ‘phrases tacked together like sections of a prefabricated hen-house’.

Back in the 1930s, the constabulary was busy conducting a surveillance operation on Edward and Mrs Simpson. In Spying on the Royals, the presenter, ‘Dr’ Rory Cormac, expressed amazement. The phones were tapped at Fort Belvedere, he told us. The mail was intercepted. A plod from Special Branch, with a screwdriver and a set of Bakelite headphones, eavesdropped from Green Park on chats the Prince of Wales had with his brother, the Duke of York. Spooks from MI5 mingled with guests at a garden party. The upshot of the ‘intelligence gatheing’ was that Edward VIII held Nazi sympathies, was unpunctual, drank cocktails, went to nightclubs, spent lavishly on Mrs Simpson’s wardrobe, and was generally a bit of a bounder. I don’t know why this programme was advertised as revelatory. I’ve known all this stuff for years.

In Holding Back the Years, Maureen Lipman was in Hull, talking to pensioners who kill time going to bingo, making ‘challenging things’ like wooden dinosaurs in potting sheds, and talking to their dogs. One poor  old soul not only talked to his dog; he talked to his mother, whose ashes were in a big urn on her favourite chair.

How the Widow Rosenthal kept a straight face I have no idea. She had a fine time drawing the raffle at the Darby & Joan Club; except not even pensioners in Hull wanted tins of tuna chunks. It was like Phoenix Nights, only real.

At the finish, Maureen stood before the Larkin statue at the railway station and quoted a few of the poet’s jollier lines: ‘What do they think has happened, the old fools, to make them like this ? ... Why aren’t they screaming?’