The Bible and the bottle 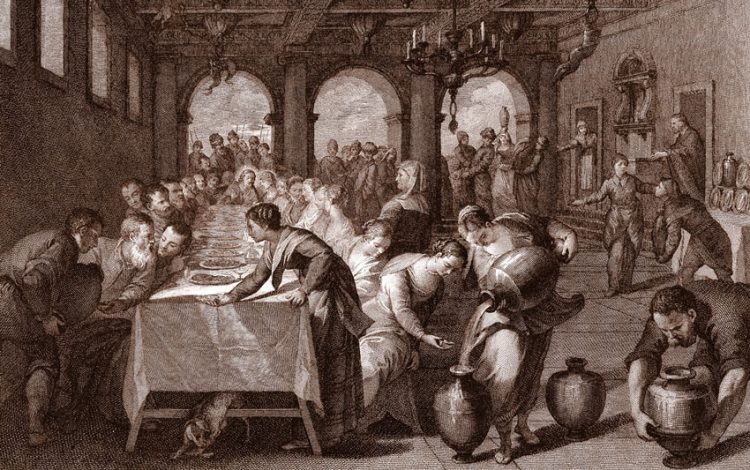 The Wedding at Cana, etching 1772 by Giovanni Volpato after Tintoretto
View Full Size
1
of 1

There is a religious school of thought that argues the Bible is anti-alcohol and Jesus drank not wine but grape juice. Henry Jeffreys is unconvinced

Did Jesus drink wine? You’d think the answer would be a resounding ‘Hell yes!’ Just think of the Wedding at Cana or the Last Supper. Then there’s Holy Communion: wine plays a sacred role in most Christian churches. But a couple of years ago I discovered that not all Christians agree.

My wife comes from a family of Southern Baptists who live in Iowa. Her grandparents were missionaries. They do not drink because they believe that the Bible expressly forbids it. I asked my mother-in-law about this and she told me that Jesus didn’t turn water into wine in the miracle at the Wedding at Cana, he turned it into grape juice.

If I’d been a bit quicker on the draw I would have quoted Psalm 104:15 ‘wine maketh glad the heart of man’ and we could have had a proper Bible quote-off but my Biblical knowledge is a little lacking. So I decided to do some research. It turns out there is a whole branch of writing arguing that the Bible is explicitly anti-alcohol. Pastor John Hamel, an Evangelical preacher from Nashville, writes: ‘The fermentation of wine ... is a process of decay, which is rooted in death. Satan is the author of death, not Jesus or His Father.’ It’s a rather circular argument. And this proscription against fermentation would preclude eating sourdough bread, sauerkraut, salami and cheese, which no Christians as far as I know have a problem with.

Far more convincing is the Rev William Patton’s 1871 work Bible Wines, which has become the bible of non-alcoholic Christianity. I think this is the origin of my mother-in-law’s point about the Wedding at Cana. According to Patton, the Greek word Oinos, used in the Gospel of John, meant ‘new wine’, which could also mean grape juice. Except that it doesn’t. I spoke to Canon Dr Anthony Phillips, an expert on Biblical Greek, who told me that it always means wine and that ‘There is a Greek word for grape juice which is trux but as far as I know it does not appear in the New Testament.’ He went on to say that ‘to argue this [grape juice] is what Jesus ordered is specious. Is it seriously suggested that at the Last Supper, Jesus produced grape juice?’

In a climate such as Palestine it would have been nearly impossible to preserve grape juice without fermentation. Yet the Rev Patton’s book is a picture of a parallel world where rather than make wine, the ancients would have preserved grapes by boiling the juice or pickling whole grapes. But of course they wouldn’t because they would have just turned it into wine.

Wine was ubiquitous in the ancient world. According to wine historian Hugh Johnson, the only book of the Old Testament that doesn’t mention wine is Jonah. The usual Hebrew word in the Bible for wine is Yayin. Rabbi Rebecca Qassim Birk confirmed to me that it never means grape juice. Naomi Alderman, a novelist with a good knowledge of Hebrew both ancient and modern, told me ‘abstaining from alcohol isn’t considered positive in Judaism, in fact there are festivals where you’re actively supposed to drink. No evidence ancient Hebrews drank grape juice, plenty of wine-jar evidence they drank wine!’ In present-day Armenia they have found remnants of winemaking from 6,000 years ago. Even under Islam, Jewish and Christian communities made, and indeed still make, wine.

The only reference I could find to total abstinence comes from Numbers: ‘He shall separate himself from wine and strong drink...’ This is the Nazarite vow, a holy order who also vowed not to cut their hair. This is not the mainstream Jewish view of alcohol. John the Baptist was a Nazarite and in the Gospel of Luke, Jesus is explicitly contrasted with him: ‘For John the Baptist came neither eating bread nor drinking wine; and ye say, He hath a devil. The Son of man is come eating and drinking; and ye say, Behold a gluttonous man, and a winebibber [oinopotes in Greek, literally wine drinker], a friend of publicans and sinners!’

Unlike with many other things, the message from the Bible on alcohol is clear: drink good, drunkenness          bad. For most of Protestant history, this crucial difference was understood. John Milton, the poet laureate of Oliver Cromwell’s Britain, wrote a paean to the joys of ‘spicy Nut-brown Ale’ in L’Allegro. Methodists now shun alcohol but the founder of the movement, John Wesley, drank wine and was a beer connoisseur. The stereotype of the tight-lipped unsmiling Calvinist is an enduring one, yet John Calvin himself wrote ‘We are nowhere forbidden to laugh, or to be satisfied with food ... or to be delighted with music, or to drink wine.’

American Protestantism used to be similarly relaxed about drink. The first crisis of the Pilgrim Fathers when they arrived in America was that they didn’t have any beer to drink. But following independence, the country developed a serious drink problem. In his book The Alcoholic Republic the historian W J Rorabaugh estimates that the average American in the early 19th century put away a pint of spirits a day. The understandable reaction to such excess was the temperance movement that flourished on both sides of the Atlantic. Initially this just meant temperance, moderation, but it soon moved to prohibit alcohol entirely. Much of the energy from the movement came from Evangelical Abolitionists. They’d freed the black man from slavery, now they turned their attention to the white working class, whom they saw as enslaved by alcohol. The Rev William Patton was just such a man. The techniques of the anti-slavery movement were used to demonise alcohol: mass petitions, articles placed in the press and striking prints depicting the misery of alcohol.

The roots of Protestant abstinence lie not in the Bible but in an entirely understandable attempt to stamp out drunkenness. This mass movement later led to Prohibition, with all the crime and unhappiness that went with that. One of the problems with this absolutist attitude to alcohol is that it makes drinking something illicit. When eating with my in-laws, rather than drink a bottle of wine at the table I would sneak off for a surreptitious dram of whisky in my room.

From learning a bit about Biblical abstinence, I am struck by the unyielding certainty of its proponents. They know better than scholars of the ancient world, people with a knowledge of ancient Greek and Hebrew. And yet ordinary Baptists aren’t always so closed off. Earlier this year I had lunch with a Spanish winemaker. His wife’s family also didn’t drink for religious reasons. He politely discussed it with them. He pointed out that Jesus did indeed drink and showed his in-laws the evidence. Rather than falling out with them, they were persuaded and, having been abstinent all their lives, now go on wine-tasting holidays with their daughter and son-in-law. People changing long-held beliefs in the face of evidence? Surely a miracle to rival turning water into wine.

‘Empire of Booze: British History Through the Bottom of a Glass’ by Henry Jeffreys, Unbound £16.99

Make your will now - Hilary Macaskill