The cut-throat razor is back 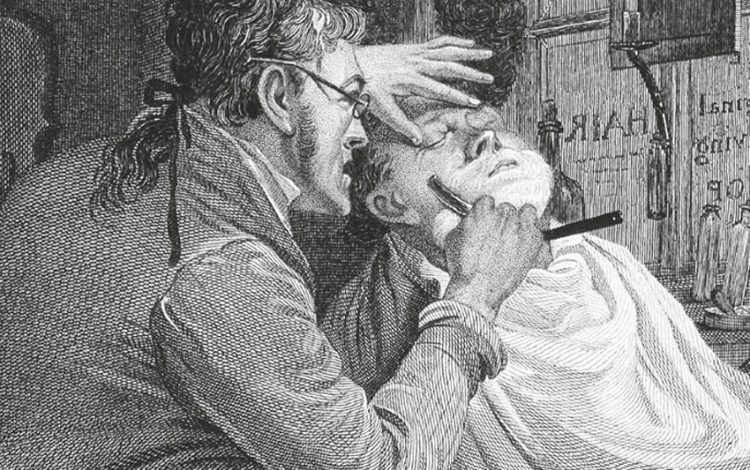 Ousted by the safety razor many years ago, wet shaving is returning in retro-chic style. John Walsh tried it

There was a time when barbers were paid more than surgeons. But then they were far more versatile than any sawbones. In mediaeval Europe, you visited the barber for every occasion where blade met human filament or skin: hair-cutting, beard shaving, blood-letting, boil-lancing, cyst-draining. They would also apply leeches, pull your teeth out and give you an enema if you asked them nicely.

Popular chaps, the barber-surgeons. And in its heyday – late 19th-century to the 1940s – the barbershop was a haven for male bonding, gossip and raillery amid the walnut solidity of the chairs, the gleaming chrome fittings, the flash of cut-throat razors and the olfactory delirium of leather, cigar smoke, hot towels, lime cream, violet oil and West Indies bay rum.

The barbershop as a male sanctuary, but one where a straight razor suggested the closeness of death, became a movie cliché. Remember Charlie Chaplin in The Great Dictator, shaving a nervous customer to the strains of a Brahms Hungarian Dance? Robert De Niro as Al Capone, lecturing a circle of journalists about how violence is ‘bad for business’ in The Untouchables? Clint Eastwood in High Plains Drifter, set on by three bad-asses in a barbershop and shooting them all through his gown?

The decline began when Gillette mass-marketed the safety razor in 1904; then two world wars reduced the half of the population with stubbly chins, and survivors found it more economical to groom themselves at home.

Fans of retro grooming needn’t despair, however, because old-fashioned ‘wet shaves’ have come back lately. Ted Baker has opened ten branches of The Grooming Room in London, and Envy Barbers in Covent Garden offers a posh haircut and wet shave. When I heard that Fortnum & Mason in Piccadilly had opened a retro barbershop, I went to try it out. It’s a small, cosy boîte, designed in matt dark blue, and full of cupboards. Some cupboards house the paraphernalia of scissors and strops, while others house a bar and a fridge. A pretty Canadian called Breanna asks if you want a drink to relax you – and, expecting a choice of Evian or tea, you find that it’s between wine, whisky (Balvenie 21-year-old malt) and champagne. I settled on a dry martini, which arrived chilled to perfection.

The Fortnum’s barber is Jay Ayana, from Colombia. He is neatly bearded, ultra-precise in his movements, and chatty without being annoying. Barbering runs in his family: his father owned a hairdressing salon in the main street of Cúcuta on the Venezuelan border. Jay picked up lots of shaving lore in his travels, especially in Singapore, where the local barbers perform a ritual shave in 71 strokes – the final one being to remove the vestigial square of Hitler-moustache stubble under the nose.

Jay got stuck in: hot towel over the cheeks, another over the forehead, then lemon-and-verbena facial wash made by D R Harris of St James, the oldest pharmacy in London. Other products arrive in a perfumed flock: Penhaligon’s Face and Beard exfoliating scrub to soften the skin, then Almond Oil Skinfood to brace it for the assault heading its way.

You’re asked to choose which shaving cream you fancy: there’s Eucalyptus and Lavender and the neutrally named ‘Arlington’ and ‘Marlborough’ (no, it doesn’t smell of fags) and ‘Windsor’. I chose Sandalwood, on account of it being the smell of my true love (sadly unrequited) in the hippie days of 1968. Jay didn’t whip up a creamy froth in a mug, as I’d expected. He put a dab on my chin, moistened a badger brush and worked the cream in ever-increasing circles until I resembled the full Good King Wenceslas.

Jay fitted a new blade in his cut-throat razor, and, holding it in a bizarre, complex, between-the-fingers grip like a Masonic handshake, set to work. The noise! I hadn’t imagined that an old-fashioned wet shave would be so hissingly ssskkkrrratchy, so alarmingly invasive, as if my ear had become specially tuned to listen to someone apparently slicing my skin off.

It took ages, as my cheeks were shaved upwards, then downwards. Jay explained the latter was ‘against the grain of your beard’. I’d no idea I had a grain. Then came four more hot towels, then a cold one scented with Fortnum’s 1707 fragrance, and lastly a tingling moisturiser to close the ravaged pores.

There was, sadly, no bay rum to finish but I ended the hour with a feeling of intense satisfaction. My cheeks were now as soft as butter. There was a touch of redness on my chin, a reminder that this had been essentially a tough, manly, scrapingly mediaeval experience, the opposite of metrosexual pampering. I was also in need of a second martini to soften the blow of the £45 bill for my one-hour session. Many of Jay’s clients (who apparently include Middle Eastern potentates’ offspring) pay £850 for twenty sessions (haircut or shave) a year, plus a ‘kit’ – which means a box in which their favourite oils, creams, razor and sundry unguents are kept for their next visit. It works out at £42.50 a visit.

I liked the Retro-Edwardian Shaving Experience. It’s not something you’d do every day, but it would make a fine present for a male friend who’s bored of his shaving regimen of soap, water and a £5.99 Gillette disposable from Waitrose.

Winner of the 2021 Jeremy Lewis Prize