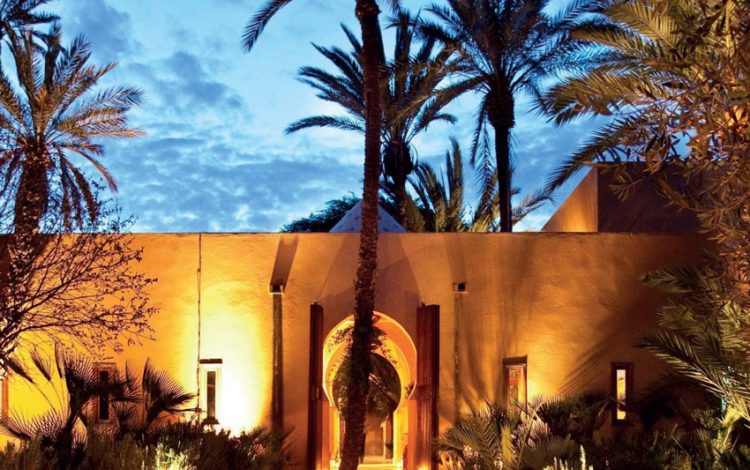 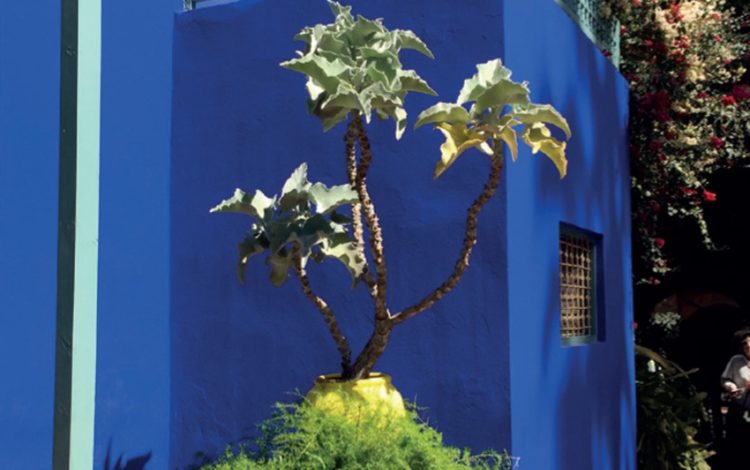 In a phrase that is itself gilded, Messrs Cowan and Johnston, writing in the 1880s, described the arboreal riches of Marrakech – walnut, olive, mulberry, almond, apricot, willow, aspen, cypress and myrtle – as being towered over everywhere by ‘golden tassels’ hanging from lordly date palms. Nor does their book, Moorish Lotos Leaves: Glimpses of Southern Morocco, overlook the city’s other delights: ‘Gorgeous flowers of richest odour, lustrous birds of sweetest song, banquets far surpassing the visions of the epicure.’

The traveller arriving by air is treated to a useful geography lesson: the low-rise city, situated on a vast fertile plain, is seen dramatically protected from Sahara sands by the sweeping arc of the snow-capped High Atlas Mountains. With, yes, much new suburban sprawl, Marrakech still appears compact, and the absence of skyscrapers (no building exceeds the 257ft minaret of the 12th-century Koutoubia Mosque) gives the impression that you’re heading for a small rural town instead of Africa’s most colourful, bustling and seemingly chaotic city, with a roofscape animated by nesting storks snuggling up against giant satellite dishes. At the city’s heart is the walled medina, the old town, where many a souq sells just about everything imaginable, from Morocco’s famous leather and metal goods to soaps, ceramics, jewellery and clothes. And at the medina’s heart is the great square Djemaa el-Fna, brimming with musicians, dancers, acrobats, beggars, fortune-tellers, chained monkeys and snake charmers, all competing for the tourists’ dirham (but they’ll happily take your euros). Beware, though – you’ll almost certainly be asked for money if you point your camera at them.

As evening approaches, a parade of pop-up restaurants pops up in long rows, with portable ovens and grills steaming like long-forgotten locomotives. They’re cheap and the food comes hot and fast – sans alcohol. For that you must retreat to the big international hotels or risk swigging from a secreted supermarket bottle. The demon drink is largely unavailable – hence, alas, no casual falling into a wayside caff for an icy beer at the end of a long walk.

Those High Atlas Mountains – at 13,670ft, Jebel Toubkal is the highest – provide Marrakech with its lifeblood. Gradual summer-long snowmelt ensures a plentiful supply of fresh water, ferried to the city by springs, aquifers and manmade channels, endowing the numerous tree-filled parks and public gardens via complex irrigation systems with a verdancy unknown in other near-desert regions. And without that abundance of water Marrakech could not support its necklace of golf clubs, their links as green as Surrey’s best.

It can sizzle in Marrakech. In late March I enjoyed a succession of warm-to-hot sunny days followed by chilly evenings. On a return visit in May, when daytime temperatures can hover around 40C, it was too hot for anyone but a suicidal sun worshipper – and that’s it for the remaining summer: July and August are considered low season.

As long ago as 1871 Sir Joseph Hooker, a one-time director at Kew, said of a Moroccan garden that ‘So far as any enjoyment is concerned with it, the paramount object is shade and coolness … trees and running water are therefore essential requisites.’ I too was there primarily to look at gardens, taking frequent refuge under vine-clad arbours and leafy boughs.

Fragrance proliferates, given off by citrus and jasmine flowers fused with the pungency of mint sold on street corners as an infusion for tea. Other aromatic herbs, scented-leafed geraniums and freshly ground spices add their own distinctive notes to an intoxicating city-wide cocktail of nasal delights. I recall the roses, too. At the Beldi Country Club, a twenty-minute taxi ride from the medina (go there for lunch and enjoy exquisite Moroccan wines), some 13,000 roses have been planted, a prelude to a scattering of small gardens throughout the grounds. The roses start flowering in late March and I leave to your own imagination the strength of their overwhelming scent.

Enclosed gardens trap and enhance a sweet bouquet. The courtyards of the Bahia Palace, with palms, roses, agapanthus and loquats, water spouts and rills, need a slow approach. Paths of Moorish ceramics connect the geometric flower beds, while gardens bloom on flower-painted ceilings in the palace’s many labyrinthine salons.

The Jardin Majorelle, in a chic residential area outside the medina, is perhaps the most visited garden in all Morocco. Created by French painter Jacques Majorelle in the 1920s, with a Cubist studio (now the unmissable Berber Museum of dazzling tribal jewels), it was initially planted with shade-giving trees and exotic plants to create ‘a cathedral of shapes and colours’. A paint now known as Majorelle Blue prevails, with splashes of complementary lemon yellow and terracotta. The garden lay abandoned after Majorelle’s death in 1962. Four years later, enter Yves Saint Laurent and his partner, Pierre Bergé, who, on their first visit to Marrakech, were ‘seduced by this oasis’, and on hearing it was to be sold and replaced by a hotel did everything they could to stop it. And they did. It’s a triumph of garden restoration, with standards of maintenance and plantsmanship rarely encountered. And that ubiquitous blue paint can be bought at the garden’s boutique alongside covetable YSL accessories – credit cards accepted.

For those in search of more than beauty there’s Gary and Meryanne Martin’s Jnane Tamsna in the Palmeraie district, a few miles out of town. Gary is an American ethnobotanist who has made a private botanic garden of world importance around his magnificent guesthouse, furnished by Meryanne, an interior decorator of international acclaim. Close by is the luxury hotel Les Deux Tours, set in serene gardens with swimming pool, vegetable potager, alfresco four-poster beds for post-prandial recovery and a model farm with goats and hens. The nearby Palmeraie Museum has an ‘authentic’ Moorish garden and a remarkable collection of cacti that includes the painfully prickly Echinocactus grusonii, cheekily known as the mother-in-law’s cushion.

Back in the medina, the city’s latest horticultural offering opened just a few months ago: the Secret Garden comprises a fabulously rich flora and a traditional Paradise garden, vision of Italian entrepreneur and long-time Marrakech resident Lauro Milan, owner of the celebrated (licensed) Café Arabe, situated opposite the garden’s main gate.

Marrakech needs time and patience. Just brush up your bargaining skills for shopping sprees in the souq, where nothing is priced and where everything must be bargained for. Fun.