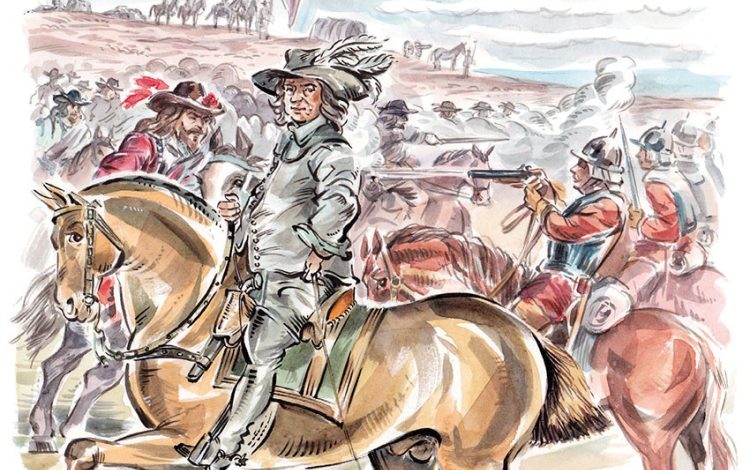 Oliver Cromwell died today in 1658. His personality and faith are tricky to discern - possibly due to his extraordinary transformation, says David Horspool

He was a dependable, inspirational commander yet capable of disloyalty and double-dealing. A cold, ruthless opponent on and off the battlefield, who could be driven to tears when making a speech or display restraint and mercy when it was asked of him. Above all, he was a man of God – God’s Englishman, as the great radical historian Christopher Hill called him. Yet, in both his public and private dealings, he could be singularly devoid of some of the Christian virtues.

It is no wonder that, as Ronald Hutton remarks in the splendid first volume of his new biography, Oliver Cromwell ‘seems to be the most heavily studied ruler in the whole story of these islands’.

Cromwell’s is a personality that never quite yields itself up to the scrutiniser. Nowhere is this difficulty more apparent than with his faith. Cromwell displayed the zeal of a convert to Puritanism, the most uncompromising version of Protestantism driving the rupture with Charles I that led to Civil War.

Yet he appears to have had no problem in pursuing vendettas against ostensible allies, which could include telling complete lies with a straight face.

Of course, even if Cromwell had been a much more straightforward, readable character, he would still be worthy of serial historical investigation.

His is a unique story of personal achievement in British history: the rise from obscure country gentleman to head of state. No one – not even Oliver’s distant ancestor Thomas, who rose from Putney publican’s son to Henry VIII’s right-hand man – ever made it as far.

Hutton’s book concentrates on the years before this final leap was made. We follow Cromwell from his birth as the only son (of seven surviving children) of Robert and Elizabeth in 1599 in Huntingdon – ‘urban gentry’ – through a truncated education, marriage, a difficult loss of status and direction, before conversion and a seat in Parliament began to alter his fortunes.

At the outbreak of the Civil War in 1642, Cromwell was still a relatively obscure MP, though an energetic opponent of the king, particularly when it came to religion. Simply put, Charles’s parliamentary opponents objected to the king’s promotion of a more ceremonial interpretation of Protestantism, which they equated with crypto-Catholicism.

It was the fortunes of war that transformed Oliver into a figure of national importance. Hutton follows the evidence as far as it will take him and no further. Even allowing for the great gaps in the story left by the absence of a personal archive for Cromwell, and his starting point as a minor cavalry commander, it is hard to believe that any missing document could answer the great question. Exactly how did a man of no military experience, without even the conventional training and martial expectations of his aristocratic comrades (and enemies), turn out to be such a brilliant soldier? Cromwell himself knew: victory was ‘obtained by the Lord’s blessing upon the Godly party’.

Hutton soberly goes through more prosaic reasons. First, though Cromwell made mistakes, he learned from them. He never, for example, repeated the error of pursuing an apparently vanquished opponent from the battlefield.

Secondly, while he could be argumentative and obstructive, when he found a superior in Sir Thomas Fairfax, whom he trusted, he was totally reliable and followed strategy meticulously.

Thirdly, he was lucky, not just in his personal preservation from harm – including the cannon shot that killed his horse at Winceby or the wound in his neck that could have been so much more serious at Marston Moor. It was also his good fortune (Providence, he would have called it) that he usually faced the enemy with superior numbers, that the Royalists made cardinal strategic and tactical mistakes, and that on the occasions when he did fail – at Newbury in 1644, for example, where his cavalry were routed by his opposite number – it was not fatal.

To this luck, Oliver added quite a lot of spin. Hutton cannot tell us whether Cromwell directed the phalanx of journalists who, from early in his career, elevated his own part in engagements and played down those of his fellow officers. But he certainly didn’t obstruct them, and Hutton shows how Cromwell’s habit of giving all the credit to God in his own dispatches, and mentioning only subordinates, obviated the need to itemise the contribution of the Lord’s other earthly instruments in Parliament’s victories – ie Cromwell’s superiors.

Hutton leaves Cromwell triumphant, as the Commander of Horse in the New Model Army that had won the Civil War and captured Charles I. Throughout the book, Hutton quietly avoids the temptation to look too far forward, allowing the surprises and tergiversations of Oliver’s formative years to emerge afresh. But we can permit ourselves the luxury of knowing that the Civil War had a course to run yet, and that Oliver Cromwell would play an even bigger part in the sequel.

If Ronald Hutton is half as discerning, clear, and even-handed a guide to these years as he is to his subject’s making, we have another treat in store.