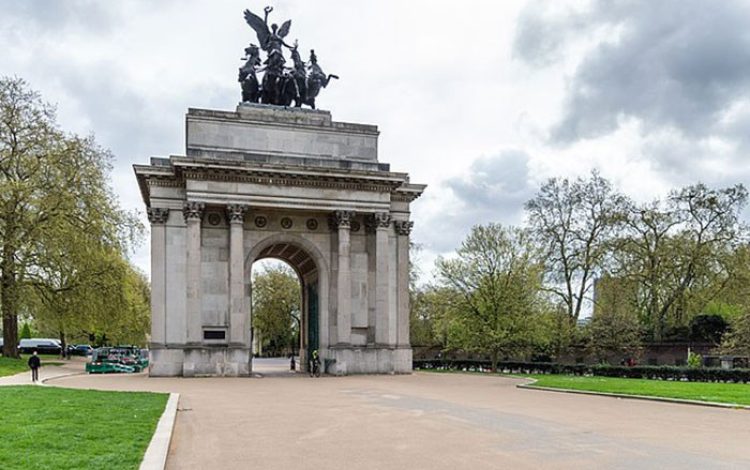 Trapped in central London, Andrew Jones circumnavigated the boundaries of his home in Piccadilly, daily marching forth, with one building a day as his quota. What glorious details he did glean; what endearing facts he did find, says Lucinda Lambton

This book is as beguiling as a book can be.

From the first glimpse of its most agreeable small format – so satisfying to hold and with a cover that positively sings of the delights to be found within – you are charmed out of your wits.

I am not alone in being thus entranced: the brilliant foreword by Alain de Botton does not exaggerate when he declares that Andrew Jones has ‘a prodigiously well-stocked mind and heart … and is sensitive and knowledgeable about pretty much all the arts of all major cultures’.

‘With his edifying ability’ of looking ‘properly’ around him during a lifetime of distant travel, we read that Jones is ‘particularly alive to modernism in African architecture’.

He was pretty well stymied by the onset of pandemic restrictions. So it was that this superbly elegant and sympathetically old-fashioned book was created within 21st-century lockdown rules.

Trapped in central London, the author circumnavigated the boundaries of his home in Piccadilly, daily marching forth, creating Instagram posts, with one building a day as his quota. What glorious details he did glean; what endearing facts he did find.

Early on, we see the mid-18th-century beauties of the ‘joyously flamboyant’ Spencer House. ‘All I can say whenever I see Spencer House is “Hurrah”,’ writes Jones about its façade, dominated by a huge pediment bedecked with palm fronds, statues of Bacchus, Ceres and Flora and a quantity of urns.

Standing next door, we see, in too-harsh-for-me contrast, the mid-20th-century concrete of Denys Lasdun’s ‘modernist’s dream’ at 26 St James’s Place; in reality ‘a veritable millefeuille of complexity!’ writes our guide.

He admires the building’s setting – marching along Queen’s Walk, overlooking the park – and the ‘constant aesthetic banter’ with Spencer House and its neighbours.

Another of his excellent pickings is James ‘Athenian’ Stuart’s neo-classical rooms at Spencer House – some of the first of their kind in 18th-century Europe.

Such historic details abound – sometimes with little relevance to the buildings, but included for their sheer delight. Number 119 Piccadilly was once the Royal Aero Club, ‘whose members included many of the fathers of mechanised aviation in Britain’.

Charles Rolls was a regular, a man so mean that he would always bring his own sandwiches and then order a glass of water before leaving, without having spent a farthing!

This was also the gentlemen’s club that sponsored a competition to design the first aircraft seat belt in the world.

In 1801, Wellington Arch – with its beautiful gates by Decimus Burton – displayed a lock with the promise of 200 guineas to anyone able to pick it. In 1851, the challenge was successfully taken up by Alfred Charles Hobbs, an American locksmith, who took 51 hours over 16 days to do the deed, while visiting London for the Great Exhibition.

In 1912, the arch was crowned by Adrian Jones’s Peace Descending on the Quadriga of War – the largest bronze statue in Europe. Some 50 years earlier, an immense equestrian statue of Wellington – a man would have stood as high as the horse’s knees – by Matthew Cotes Wyatt, had been hauled aloft to stand proud over London.

It was mocked by the populace for its great size. Queen Victoria wanted to have it removed but, on the Duke’s threatening to resign all his public posts if it were, the Queen backed down. It was so enormous that when it was waiting to be dispatched from the sculptor’s studio, 12 men sat down to a celebratory dinner in the animal’s stomach.

Handel’s Music for the Royal Fireworks was to be played for the first time in Green Park, amid the fizzling splendour of George II’s colossal party planned to mark the end of the War of the Austrian Succession. The pyrotechnicians Ruggieri and Sarti of Bologna, under the direction of Captain Thomas Desaguliers, Chief Firemaster of His Majesty’s Laboratory – what gratifying details! – were put in charge.

A vast structure, the Temple of Peace – 400 feet long by 114 feet high – was built, from where some 30,000 fireworks were to shoot forth. A 100-strong orchestra, including 40 trumpets, was ready to add to the majesty of the occasion and 100 cannons were also on hand.

It was not to be: as thousands waited, the Temple of Peace took fire and was followed by an exploding conflagration that destroyed the lot.

Handel’s music alone is the legacy of these grand plans; a rich addition to, as Jones puts it, ‘this wonderful pocket of London’.