The sublime beauty of wrecked England 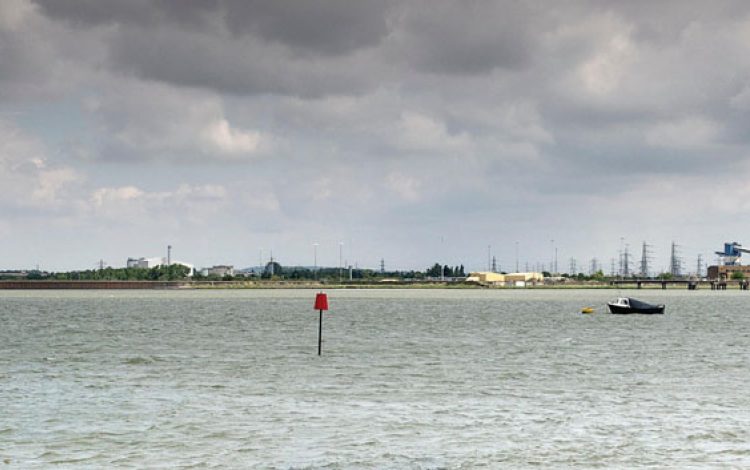 Church crawl or pub crawl? Gavin Stamp combines both to discover the neglected landscape and history of north Kent

Church crawl or pub crawl? Gavin Stamp combines both to discover the neglected landscape and history of north Kent

‘Unwrecked England’ was the theme of articles published in The Oldie by the late and much lamented Candida Lycett Green. Her subjects were places of beauty or antiquity that had not been spoiled in recent times. But beauty and being unspoilt are subjective notions and, after all, almost all places of interest in this country are wholly or in part creations of fickle humanity. So there are many other sites where the heavy hand of man is all too evident but which can still be of interest, even if the result is not conventionally beautiful: landscapes transformed by industry, for instance, or dominated by grand if unfashionable structures such as railway viaducts, factory chimneys or electricity pylons. Wrecked England can sometimes be well worth a visit.

One such landscape is north Kent, the stretch along the Thames between London and the Medway. It is certainly not pretty, and much of the land itself has been devastated by industry and transport. Yet much survives from an earlier past and the resulting unexpected juxtapositions can offer a strange, even surreal beauty. I recently revisited this part of my native county on one of the church crawls that I regularly enjoy with a group of friends. Such jaunts are always rewarding: pubs and churches survive – at least as buildings – in even the most spoiled or unpromising of places. North Kent, in fact, is peculiarly interesting for the broad-minded ecclesiologist.

We started in Dartford, where Watling Street crosses the River Darenth and a priory was established. Later, it became the first town in England to manufacture paper, and came to be dominated by paper and powder mills. More recently, since the Second World War, the town has been systematically wrecked by an inner ring road and a series of bad-mannered modern buildings in the centre that expose their ugly backsides to the pedestrian. Even in 1948, in the Kent volume of those green County Books, Richard Church could write that ‘Dartford itself is now a place to escape from as quickly as possible...’ But he was wrong. The core of the old High Street survives, in which there is still a street market, and at the end is the parish church, one of those grand and spacious mediaeval structures which, even if much restored, are the glory of so many English towns. Dartford’s has a large 15th-century mural of St George and the Dragon, good Victorian and Edwardian stained glass and some very good monuments. One has its inscription in black-letter German as it commemorates the German wife of Sir John Spilman, Queen Elizabeth’s jeweller, who established that first paper mill. There is also a poignant modern plaque to Richard Trevithick, locomotive and steam pioneer, who died in poverty in the town in 1833.

So the next part of our crawl was appropriately by train, to Stone Crossing, to reach one of the most surprising churches in the country, for here is a 13th-century building – the ‘lanterne of Kent’ – of unlikely quality and richness in a most unpromising setting. Back in 1969, in the first ‘Pevsner’ for this part of the county, John Newman wrote how it is ‘unforgettable, and its dingily dramatic surroundings are in their way equally so. The churchyard, on a promontory of the chalk cliffs above the Thames estuary, stands on the brink of a quarry, where two tremendous chimneys endlessly spew forth cement dust’. Today the quarry has gone, replaced by a banal modern development of suburban houses that provides an equally unsympathetic context.

The church was built by a Bishop of Rochester, Laurence de St Martin, who had good connections with the court at Westminster and got the masons working for Henry III on Westminster Abbey to do something on the side. In consequence, the church is a sophisticated piece of geometrical decorated architecture and the blank arcading around the chancel is enriched with superb carved spandrels. George Edmund Street, the great Victorian architect of the Law Courts in the Strand, who loved Stone Church and put back the long-destroyed chancel vault, wrote that, ‘It may safely be pronounced to be among the best sculpture of the age that we have in this country.’ It is certainly lovely.

The journey onwards, eastwards, was by bus, along the A226. Somewhere to the south lies the modern nightmare of the Bluewater Shopping Centre, but we didn’t go there. Nor did we stop at Swanscombe to see the once-fine church by the great Norman Shaw, for it has been mutilated by being converted into flats. It was onwards to Northfleet, to enjoy one of the weirdest landscapes in England. The village has a mediaeval church, dedicated to St Botolph, much battered and then restored in the mid-19th century. It is of peculiar interest as the chancel was embellished with new fittings, decorative tiling and stained glass designed by E W Godwin, the architect and designer who began as a hearty Goth, courted disapproval by living in sin with the young Ellen Terry, the future actress, and ended up as architect to James McNeill Whistler and Oscar Wilde.

But what is most extraordinary about this church is that it teeters on the edge of a deep quarry. For what remains of the old village of Northfleet stands on a sort of narrow isthmus, as the land on either side of the main road has been eaten away, as if by a horrible disease. Quarrying, for chalk, had long gone on here, but increased in the 19th century with the Portland cement industry. So today, to the north, the land suddenly drops into an old quarry and beyond is a modern landscape of cement works, newer industry and wharves, with the Thames in the distance; while to the south is another area of old and deep quarrying, now dominated by railway lines and electric wires, for HS1 comes through here on its way to France and in the distance, just out of sight, is that modern phantasmagoria called Ebbsfleet International where many Eurostar trains now, incomprehensibly, stop.

Northfleet might seem a contemporary nightmare, but this weird landscape is also rather thrilling. And another good reason for a visit is another church that stands even closer to the frightening drop. This is the Roman Catholic Church of Our Lady of the Assumption and it is the work of Sir Giles Gilbert Scott, the celebrated architect of Liverpool Anglican Cathedral and much else. Built of fine brick, but also of a new material, reinforced concrete, this church was designed just before the First World War, when the still-young Scott was experimenting, making his Gothic more monumental, almost Classical. Scott was a master of what architects like to call ‘vertical features’, creating such landmark towers as that of Cambridge University Library, William Booth College in south London, Oban (Catholic) Cathedral and the campanile chimney of Tate Modern. So the dominant feature of this church is a powerful tower, clearly a prototype for the great central tower that would rise over his cathedral in Liverpool. Here, in unlikely Northfleet, is one of the finest churches of the early 20th century.

From Northfleet, the road soon arrives at Gravesend. But in between are some relics of a most unlikely lost resort. It was called Rosherville as it was created in the 1830s by Jeremiah Rosher. His vision was a riverside resort, with a hotel and pleasure gardens, which could be reached by Londoners by boat. The quarries were exploited to advantage, to create the ‘Kent Zoological and Botanical Gardens’, below the man-made cliffs. Murray’s Hand-Book described how ‘singular masses of chalk ... have been left during the excavations, as not containing chalk of good quality, and the result is very picturesque’ – but not picturesque enough to deter later Londoners from going further on by railway to places like Margate, leaving poor Rosherville high and dry. Nor did it help that the worst ever disaster on the Thames involved a boat that had just left Rosherville. This was in 1878, when the paddle-steamer Princess Alice sank after a collision, and more than 640 day-trippers were drowned.

As for Gravesend itself, the old riverside port, it is less wrecked than Dartford and has some fine 19th-century buildings. The sadness is that the ancient town was ruined in 1727 by a devastating fire that destroyed the mediaeval parish church. Its replacement is dull Georgian. But what, today, seems the worst and most poignant loss was the grave of Pocahontas, the Native American chieftain’s daughter, brought to England, who had been buried under the chancel after she died in Gravesend before she was able to set sail for home on the other side of the Atlantic. The 400th anniversary of her death falls next year, but the only focus of any celebrations must now be her only memorial, a replica of an uninspiring statue in Jamestown, Virginia, which stands in St George’s rather barren churchyard.

Gravesend might well be the end of a north Kent church crawl. But the unsatisfied can easily go on to enjoy the more conventional delights of Rochester and its cathedral, or – if in search of more weird landscape – deviate to the north towards the Isle of Grain, past Higham, where Dickens lived, through the former bleak marshlands of Great Expectations to the estuary of the Medway, now dominated by a huge power station and an oil refinery. There is no end to the recondite delights of Wrecked England.