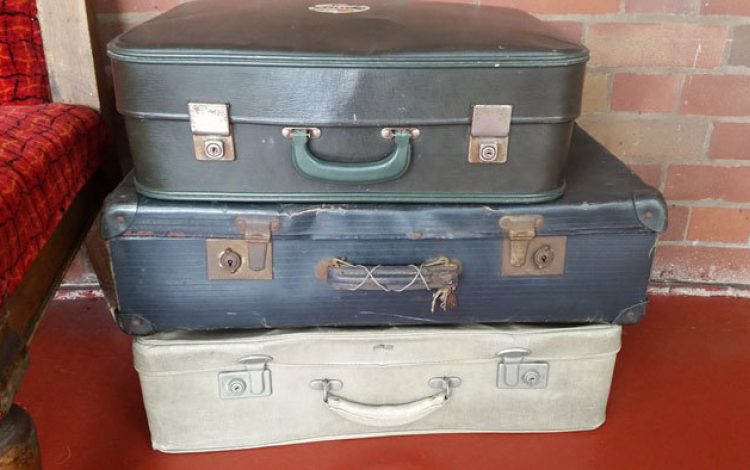 Thirty years ago, Adrian Dannatt lost a case of love letters, invitations and notes from great writers. And then it turned up out of the blue...

The message was mysterious.

A friend in Manhattan had been contacted through Facebook by a stranger trying to get hold of me. Owing to my refusal to engage with social media, they couldn’t reach me directly.

‘I have been trying to track you down, as I have a small case,’ the message read. ‘The items appear to be from the 1980s and could be of some sentimental value – so I’d like to know if you want them back.’

The message came from John Gotts, the owner of the George IV, a pub in Kentish Town, north London.

So I made my way to the George IV, a splendid, traditional corner boozer. John, a handsome, tattooed publican, offered me a drink and put onto the bar a suitcase containing a decade of my life.

How did it come to be here? It was all thanks to Alf Masterson (1943-2007), the last rag-and-bone man in London. For half a century, he walked the streets with his handcart, bell and Jack Russell. He was beloved of everyone from Alan Bennett and Joan Bakewell to Madness, who wrote The Last Rag and Bone Man about him. Alf had provided many of the fittings of the George IV. My case had been in his haul, before gathering dust for three decades down in the basement. John generously refused any suggestion of a finder’s fee.

Alf certainly came round Fitzroy Square, where I lived at the time. I must have abandoned the case in the street when I was moving out.

I took my case home. What a treasure trove of addictive, disturbing reading the jumbled contents proved to be. There was a wide variety of letters received by me between roughly 1975 and 1985 (including the years I played Just William on ITV), from the age of 12 to 22 – a missing chunk of my life vividly brought back, ripe blushes included.

What a weirdly enterprising and precocious boy I had been. There were endless rejection notes, in response

to everything from poems and short stories to articles, job applications and proposed advertising campaigns for Listerine and Parker Pens, sent by me as a crazed teenager. There was a jotted note from Peter Stothard, later editor of the Times.

Alan Ross at the London Magazine said of my poetry, ‘It is certainly vigorously written, but rather overcharged & over-imaged.’ The Times Literary Supplement bluntly stated, ‘Not much point for a while, I’d say.’

Aged just 15, I am thanked by Sir Hugh Greene, former Director-General of the BBC: ‘I came into the Bodley Head [he was chairman of the publisher] this afternoon, a few minutes after you had left your parcel with an assurance that it was not a bomb! It is extraordinarily

kind of you to let me have your copy of The Girls of Merton College [a 1911 novel for girls – Greene had been at Merton]; you are the first person who has found one…’ He then donated the rare book to his old college, signally leaving my name off the gift.

I sent random fan letters to writers. John Braine was surely being droll when he replied to me that he found my appreciation of Room at the Top (1957) ‘most encouraging’ – 20 years after the huge bestseller was published.

Dame Liz Forgan, the Channel 4 and BBC bigwig, was at the Guardian when I submitted an article to her in 1981. She was kind enough to say, ‘It made me laugh a lot but, to be perfectly blunt, I thought some of the jokes were just a fraction flash!’

The Vogue Talent Contest, where I was a finalist, aged 18, informs me that the first and second prize went to the writers Sean French and Deirdre Madden. One Louise Curram was highly commended. I look up the name to discover she was then only 14 and became an actress, before dying aged only 38.

After all these decades, there were sadly many dead figures to be found in my trunk. There was my brilliant friend at Balliol College, Oxford, who killed himself; and Amanda Atha, who worked at Harpers & Queen and died at only 57 in 2000. Then there was a surprisingly voluminous correspondence from my then girlfriend, Nicola Thorold, a leading figure in independent theatre, who died in 2016, aged only 51.

I kept every scrap of paper I was sent, from a note penned by the splendidly-named Gladys Ochiltree, our cleaning lady, to a pleasing invitation from Lady Teresa Waugh to stay at Combe Florey for the 21st birthday of her daughter, The Oldie’s Sophia Waugh.

The love letters are the best, like the exciting one – including Pierrot drawings – from my girlfriend at St Mary’s Calne, who signed herself ‘Pussycat’. And what a naughty missive from Libs, the lovely Norland nanny.

What will be most missed by today’s youth are these actual fragile envelopes, with lipstick kisses and tear-stained pages – instead of instant-delete texts and incessant swipes.

Still, the technology that ensures nobody will ever write such letters and cards again is the same technology through which I reunited with my past.