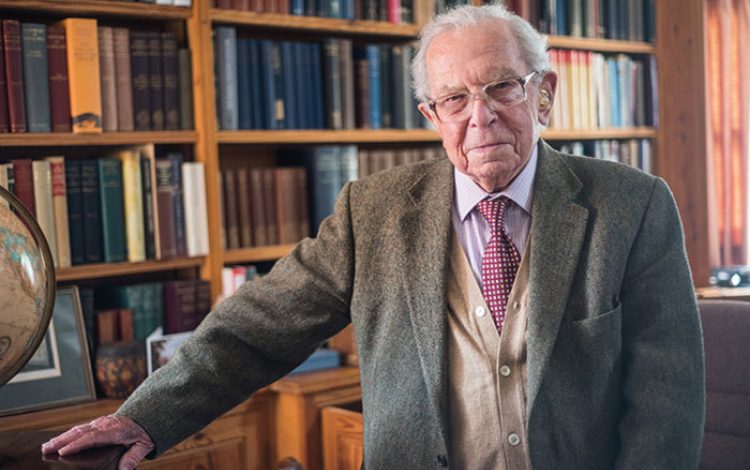 After a lifetime of ‘giving a damn’, Michael Howard now lives quietly with his partner of fifty years and his 4,000 books
View Full Size
1
of 1

Sir Michael Howard, venerable academic and adviser to prime ministers, has died at the age of 97. James Hanning met him in his bucolic Berkshire home

To say Sir Michael Howard was eminent is to be so understated as to almost defame him. He was Professor of the History of War, Emeritus Fellow of All Souls College, and Regius Professor of Modern History at Oxford University. He has advised prime ministers, written countless books on the conduct of war and did more than anyone in Britain to develop strategic studies as an academic discipline.

Sir Max Hastings called him ‘the wisest man I know’ and ‘Britain’s greatest living historian’. He lived quietly with Mark James, his partner of more than fifty years, and his 4,000 books in a caricature of comfortable village life in Berkshire. A heart attack three years ago curtailed his ‘zealous’ gardening, so the only time he went to London in recent times was to see the Queen (not that he put it that way) for Order of Merit dinners.

His conversation was flecked with names like Denis Healey, former heads of Nato and so on. Former US Secretary of State Condoleezza Rice (‘A very clever, very nice girl but without any political clout’) is a former pupil. ‘Henry’, who cropped up in one conversation, turns out to be Henry Kissinger. When I mentioned that Kissinger seems to visit the UK quite a bit these days, he repliesd: ‘Oh yes, he keeps coming. It’s the football he loves. He’s absolutely fanatical about football. He told me all about it. Extraordinary, isn’t it? German-Jewish-American ... It’s that that brings him over as much as anything.’

Howard reached the heights in both war and peace. After a gilded upbringing (Wellington and Oxford), he served with distinction in Italy, and put the experience to good use by building up the Department of War Studies at King’s College London, and later setting up the International Institute for Strategic Studies. It provided both a platform for himself and a focus for Britain’s hitherto amateurish attempts to grapple systematically with the sustaining of peace. When Margaret Thatcher wanted a big hitter, she called for Howard, whose academic cred might be expected to bring out the humility in most PMs. He recalled making a ‘rather silly’ observation about nuclear weapons. ‘It was wrong, a bad argument ... And she suddenly turned on me, her eyes blazing, and she destroyed me. I was struck speechless. I couldn’t say anything. I was so overwhelmed by the sheer power. It was very alarming. I realised I was out of my league.’

His memoirs paint an implausible picture of good fortune, and even his emerging homosexuality – in an age when it was both illegal and stigmatised – seems to have been overcome with a minimum of fuss. (‘You just needed to avoid frightening the horses.’) He deploys every trick in the book to denigrate his own role and talents, particularly in wartime. Seventy-seven years ago in August, he joined the army, becoming Second Lieutenant Howard of the Coldstream Guards. In helping to remove the Germans from the hills around Salerno, he led a bayonet charge, an act of heroism he attributed, absurdly, to a naive ignorance of its possible consequences. ‘In one’s first action, one can be very gallant indeed — it turned out that we were almost the only platoon that got to the objective and I arrived to find myself with only about four or five guardsmen. The Germans, fortunately, had gone.’

There is no hiding, though, the fact that he won the Military Cross, or that he was promoted to Captain. Much grimmer was his brush with the Germans at Castiglione, near Bologna. He and a fellow soldier, Terry, were on a night-time recce to assess the strength of a German emplacement. Terry trod on a mine, had his foot blown off and was screaming in pain. As the pair came under ever-heavier German fire, Howard, also injured, could have surrendered with Terry, in the hope that his comrade would receive proper medical treatment. But that would also ensure that, as a senior officer, he would face probably unendurable interrogation over battle plans for the following days. Or he could leave Terry, run for it and hope he would be found before long and treated decently by the enemy. He chose the latter, and discovered later that Terry had been killed. He says he behaved shamefully. ‘It’s like having a wound which every now and then gives me a nasty twinge.’ And yet, he says, ‘There was no good answer. Should I have dragged him away? God, no. Should I have let us be taken prisoner? No, but at the same time I know I should not have abandoned him. I have a gut feeling that this is a fundamentally wrong thing to do, but there was no right thing to do.’

I wonder aloud about politicians who launch wars when they have not lived through them, and whether they can really understand the effects. He seems reluctant to point fingers, and talks past my question.

‘War was terrifying for those who got caught up in air raids. It was hell for them, but basically it was boredom, deprivation, together with a certain amount of pride and pleasure and being pulled together, and a sense of belonging to a team. In Britain’s case, it was a winning team, and it wasn’t too bad. For the military, if you got caught up at the sharp end, as I did briefly, very nasty but at the same time exhilarating, if you were fortunate.’

Of the ‘Terry’ episode, a Christian humility steered him away from too much extrapolation from his own experience. ‘I was put by war in that situation. I could have been put in another situation, like running away from a bad motor accident, in which one could have been helpful but in which I behaved badly.’

He remained a believer in the US nuclear deterrent and Nato, and said it is vital that Russia is kept out of the Baltic states, but he was against the UK’s renewal of Trident. ‘The expense is becoming astronomical and getting bigger and bigger.’ Second, ‘Piling up nuclear weapons is exactly what we were doing, piling up battleships before the First World War. We were preparing to fight a totally different war from the one that broke out over us.’ Any deterrent in the future, he said, will come from cyber weapons that can destroy the infrastructure of any major city more or less at will. Nuclear weapons are not yet obsolete, but we are going that way, he suggested.

More generally, he said, humans are not good at learning: ‘I see no reason to think we’re going to be any better at [avoiding war] than our predecessors.’ Although happy to talk dispassionately and loftily about grand strategy, he was appalled by modern war. ‘What sickens me now is the rate of the casualties in Mosul. Day by day, one sees these nightmarish images of scores and scores getting killed. That is what war now involves, and it should be stopped, but how do you stop it?’

Donald Trump, he says, is looking for a fight, and Howard was predicting North Korea as a possible occasion for it before the recent exchanges. ‘There is something in the genes, something in a certain type of American, that needs an enemy. Trump, consciously or unconsciously, wants a war, and will be only happy with one, and the chances are he will get one. I think the Marine Corps, the navy and all the rest of it didn’t get much chance to shine in Iraq and Afghanistan and would not object in the least to getting a few medals.’

He also believes that the West needlessly antagonised the Russians in the 1990s.

But, after a lifetime of giving a damn he earned the right to enjoy bucolic Berkshire and, for example, a bit of television. He watched what he called ‘cops and robbers programmes’, Broadchurch and ‘occasionally ... Coronation Street’. Now there’s a man with nothing to prove.

Crime – don’t we just love it?