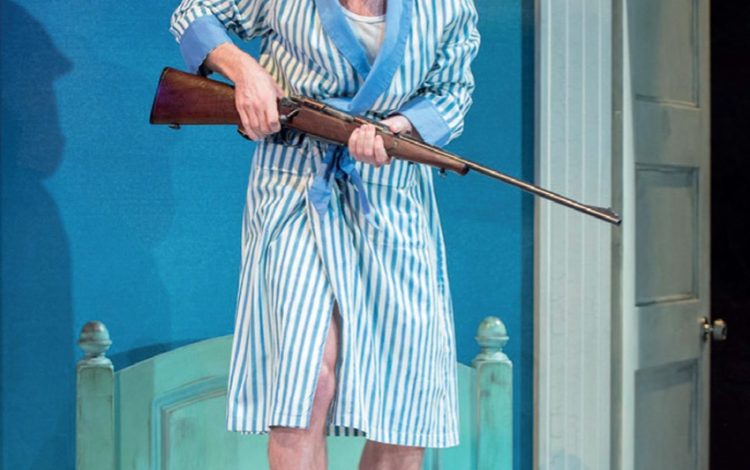 Paul Bailey on Welcome Home, Captain Fox! and The Maids

Jean Anouilh’s second play, Le voyageur sans bagage, which was first staged in 1937, is based on the real-life case of Anthelme Mangin, a soldier in the First World War, who lost his memory and his papers and was claimed as a long-lost son by several families before spending what was left of his life in mental institutions. Anouilh, much influenced by Pirandello and the once-fashionable Jean Giraudoux, made a sour and bitter comedy out of Mangin’s tragic story. Anthony Weigh’s bright new version, Welcome Home, Captain Fox! at the Donmar Warehouse relocates the action to the Hamptons in 1959, where the widowed Mrs Fox lives with her son George and his constantly sozzled wife Valerie and two African-American servants who, in the manner of literary and theatrical servants, are possessed of more intelligence than their ridiculous, wealthy employers.

Mrs Fox’s other son, Jack, has been missing, presumed dead, for fifteen years. Now, thanks to the skills of a snobbish social worker, Mrs Marcee Dupont-Dufort, someone resembling Jack has been returned to America from East Germany, where he has been imprisoned and interrogated. He answers to the name Gene, but remembers nothing about his past. What he discovers about the past Mrs Fox, George, Valerie, Juliette and James recall with both affection and dismay unsettles and unnerves him, because the younger Jack they knew is nothing short of a creep. The priggish Gene finds it impossible to believe and to accept that he seduced and sustained an affair with his sister-in-law, or that he was an indiscriminate hunter who killed animals and birds on a whim. He hates the very sound of his former self.

Anthony Weigh makes clever use of American popular culture of the period, and Blanche McIntyre matches his cleverness in her always lively production. As Marcee, Katherine Kingsley is as manic as the irrepressible Lucille Ball of I Love Lucy, while her cynical husband, De Wit, played with relish by Danny Webb, resembles the frosty character the great comedian George Burns made of himself for Burns and Allen. Sian Thomas, her lips permanently curled in contempt, is a Mrs Fox designed for Bette Davis or Joan Crawford in the matriarchs-from-hell stage of their careers. Rory Keenan as Gene/Jack bears an almost eerie resemblance to the Tom Ewell who starred with Marilyn Monroe in The Seven Year Itch

What does all this add up to? I can only answer that it is fun while it lasts, which is over two hours. It comes to a satisfyingly preposterous conclusion, which it would be mean to reveal. Mark Thompson’s design captures the grandeur of a stately mansion in the very confined space available to him, and Yvonne Milnes, the costume supervisor, must have had a gloriously happy time choosing the clothes – that New Look waistline hasn’t been on display in the London theatre for years.

Andrews and Upton have concentrated on the political resonances in Genet’s play, but they ignore completely the religious symbolism with which it is studded. The orphaned Genet, the thief and prostitute who hated authority, used the rituals of Roman Catholicism to demonic effect. They are missing here, making the entertainment much less wicked than it should be.