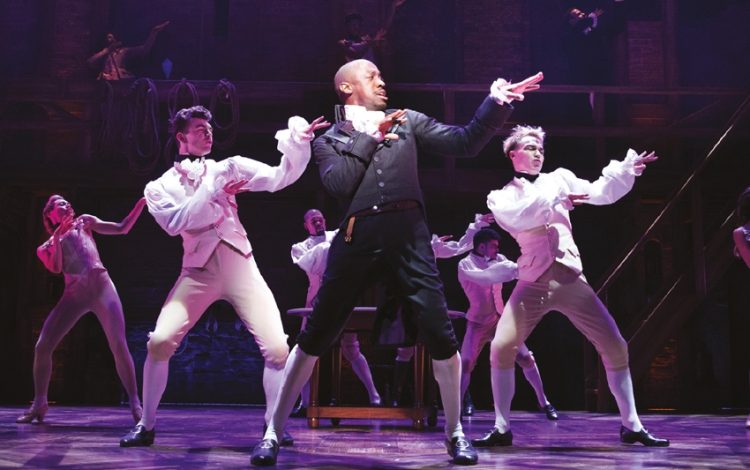 'Lin-Manuel Miranda’s extraordinary musical Hamilton, which looks as if it will be playing at London’s Victoria Palace Theatre into infinity...'

Lin-Manuel Miranda’s extraordinary musical Hamilton, which looks as if it will be playing at London’s Victoria Palace Theatre into infinity, tells the story of a ‘bastard, orphan, son of a whore and a Scotsman’ who was sent from his Caribbean home to North America in 1773 with a scholarship to study at King’s College (later Columbia University) in New York City.

Alexander Hamilton was 15 and already phenomenally ambitious. Four years later, he was appointed lieutenant colonel and aide-de-camp to George Washington and was put in charge of restructuring the Continental Army. Then, in 1789, the once penniless immigrant became the first Secretary of the Treasury when Washington was elected president of the newly formed United States. For all that, he remains the least honoured and remembered of the Founding Fathers, despite the fact that it’s his face one sees on the $10 bill.

Miranda was inspired to celebrate Hamilton in song and dance after reading Ron Chernow’s acclaimed biography of this little-known hero. He was struck by the parallels between Hamilton’s hectic and complicated life and the lives of many people in contemporary America.

He began by writing individual songs, one of which was performed at the White House, where it met with instant approval. A revolutionary subject required revolutionary music and that’s what Miranda came up with – hip-hop, rap and R&B – after a long gestation.

Yet Hamilton is not just a brilliant one-off. It belongs in an honourable tradition of socially conscious American musicals, such as Show Boat, Pal Joey, Oklahoma! and West Side Story. It concerns itself with nothing less than the birth of the American nation, and the music of the busy streets seems wholly appropriate in the circumstances. Even George III, togged up in his robes of state – complete with crown, orb and sceptre – is given the opportunity to reveal his hitherto unexpected talent as a rapper in Michael Jibson’s deliciously cheeky performance.

Thomas Kail, the director, has chosen black and mixed-race actors who can sing effectively and persuasively. Miranda’s lyrics are the chief delight of the show (I can imagine W H Auden admiring them, as he admired those of Lorenz Hart) and they have to be heard. Giles Terera sings and speaks with sometimes chilly precision as a deceitful and envious Aaron Burr, especially in what is arguably the best number, The Room Where it Happens. This song tells of the secret deal whereby Hamilton agreed to make Washington DC the nation’s capital in exchange for federal control over the debts run up by the separate states.

The nimble Jason Pennycooke, who doubles as Lafayette and a surprisingly gleeful Thomas Jefferson, is effortlessly funny. Jamael Westman, freshly graduated from Rada, plays Hamilton with an authority that usually comes with a lifetime’s experience. He catches the man’s constant restlessness, his need to topple the corrupt status quo and his almost casual rise to the top of the political ladder with absolute conviction.

It’s impossible to find fault with anyone in the cast, thanks to Kail’s careful and detailed direction. Obioma Ugoala has great dignity and presence as a George Washington who treats the clever boy from the island of Nevis like a son, while Rachelle Ann Go and Rachel John, as Hamilton’s wife and captivating sister-in-law are equally impressive.

There are moments, not many, when Andy Blankebuehler’s choreography could be stopped in its energetic tracks for a little while, since it occasionally seems like a distraction from the important matters taking place on stage. But that’s a minor cavil.

In 1915, D W Griffith’s movie epic The Birth of a Nation was shown throughout the world. It was silent, of course, but the words between the scenes spelt out a clear and rancid message about white supremacy. The film’s success led to the resurgence of the Ku Klux Klan and an increase in the number of lynchings in America. White extras blacked up as slaves and painted their faces as the Sioux.

The birth of a very different nation is the cause for celebration in Miranda’s Hamilton, a musical that doesn’t shy away from uncomfortable truths. A short essay in the programme by Professor Joanne B Freeman makes the important point that Alexander Hamilton was not a populist – for which, thanks and amen. He was a special politician in more ways than one.